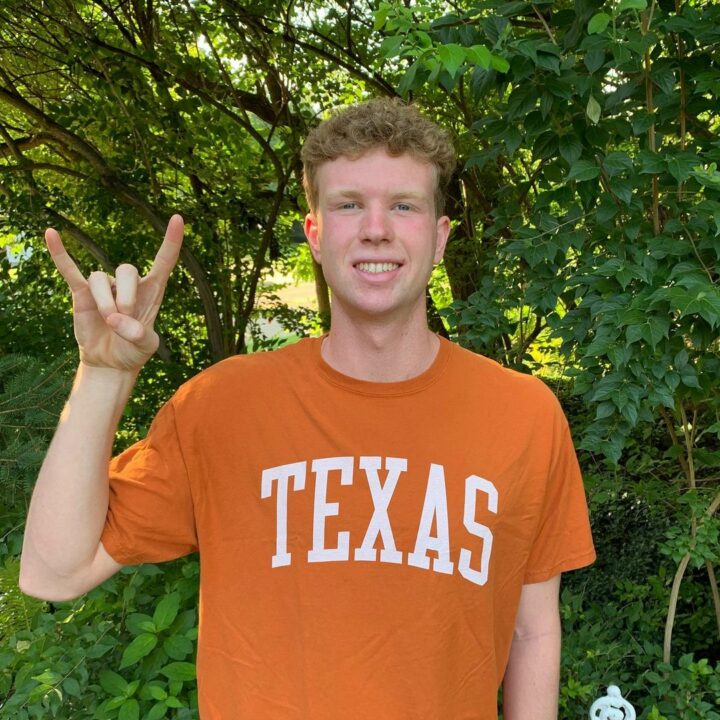 I am excited to announce that I will continue my athletic and academic career at the University of Texas! I want to thank everyone who has helped me through my journey and, I can’t wait to see what’s in store! Hook’em 🤘🏻

O’Connor is primarily a backstroker, and swam in the B-finals of both the 100 and 200 backstrokes at the 2021 SEC Men’s Championships in February.

Despite strong improvements by swimmers like O’Connor and fellow freshman Matt King, the Crimson Tide has been beset by swimmers entering the transfer portal since the end of the college season. On the men’s side, that list includes O’Connor, King, Colton Stogner, Andrew Shea, Liam Bell, Alec Dixon, and Nico Hernandez-Tome. Of that group, all but O’Connor and Shea are NCAA Championship qualifiers. Bell has announced he’s transferring to California, while King is heading to Virginia.

O’Connor joins a Longhorn backstroke group that will be potentially going through some transition next season, assuming that seniors Austin Katz, Alvin Jiang and Chris Staka (who, liked O’Connor, transferred from Alabama) don’t come back for a 5th year. The NCAA granted all athletes who competed in the 2020-2021 season an additional year of eligibility, but so far we haven’t seen any indication that any of those three will take advantage of it.

The Longhorns’ backstroke group will still include Carson Foster, who’s primarily an IMer, was an A-finalist in the 200 back last season at NCAAs, and Peter Larson also returns after finishing 17th in the same event. Additionally, the Longhorns incoming freshman class is headlined by sprint backstroker Anthony Grimm.

O’Connor’s 200 back time would’ve actually finished 2nd behind Katz at the 2021 Big 12 Championships, and he was only about half a second away from earning a NCAA invite in the invite. Although, merely qualifying for NCAAs as a Longhorn isn’t enough to guarantee you’ll swim at NCAAs, as Texas left 10 qualifiers at home last season due to roster limits. Still, it certainly would not be a surprise to see O’Connor make a NCAA roster at some point during his Texas career, given his current trajectory.

Everyone is leaving Alabama. Shame!

Shame on the Alabama AD for hiring who they did

Can someone elaborate on what is happening.? Ozzie is interim head coach…until Margo Geer finished her swimming career? And then she takes over? I saw press releases in spring but haven’t seen new info – or maybe I just missed it.

I believe at this moment, Margo Geer is now the head coach, and Ozzie is still on staff as an assistant. For a program that has been quite tumultuous with a revolving door of head coaches, choosing someone with zero official coaching experience fresh off their swimming career is a puzzling hire at best. I don’t blame all these ‘Bama swimmers for jumping ship to more established programs, and Geer has done herself no favors with how she has treated people thus far.

The Geer hire is bizarre on so many levels. Not only are her credentials as a coach unknown/nothing, but also she wasn’t exactly an insanely successful swimmer herself to justify her for the position. Sure, she… Read more »

I am curious to know how “Geer has done herself no favors with how she has treated people thus far”? What have you heard? Thanks homie

Geer has been a class act to the entire team. The ones leaving are leaving simply due to not having the coach they signed up for. Can’t necessarily blame them for not wanting to take a chance with her (it’s their swimming at the end of the day), but to say that it’s the way she’s treating them that’s driving them away is pretty false.

Thanks for letting me know. The story of Alabama’s tumultuous past few years fascinates me and I am eager to learn as much as possible about what’s been going on. Such a shame for the program, hopefully they bounce back soon.

A summary of the events from what I’ve been told from people very close to the program:

Alabama carried a lot of walkons when Pursley was the HC. Stickels came in and went on a cutting spree trying to bring numbers down, and he did it in a way that was pretty harsh and didn’t make friends in the process (see the articles from the fall 2019). He transformed the women’s team seemingly overnight with transfers into the program, but when he was out of the position this past winter, this mess started happening because those swimmers loved his training methods so much.

Perfectly said. I do believe that the AD should have hired a head coach with an exemplary track record. But the returning swimmers have a lot of respect for Margo. Bama definitely has to do a better job retaining swimmers (who chose to put themselves in the transfer portal). I’m confident that the returning swimmers and recruits will have a successful and fun season. The facilities at Bama are one of the best in the country.

Ozzie didn’t get the job. They just upped his salary by $xx,xxx.xx. He couldn’t afford to tell them where to go. The swimmers have all trained along side the new head coach. So if they are all leaving, it has to say something.

It doesn’t help Ozzie’s situation that he has a child who will be a freshman at Bama this year. That doesn’t mean he has to stay at Bama for the next four year, but financially, obviously it helps his personal situation.

I’ve heard from some folks in Tuscaloosa that Greg Byrne is “sick of dealing with” swimming and that the Geer hire was made because he knows her and she’ll work for (comparatively) cheap. Seems from his attitude that if as a result the program spirals into irrelevancy, or even non-existence, that’d be a considered by him to be a feature rather than a bug. Sad story for the swimmers and the program. I have no idea why one would become an athletic director if they don’t want to treat their school’s athletics program holistically.

Last one in Tuscaloosa please turn off the lights on your way out. Thank you.

I wonder if Rhyan White will transfer too at this point.

I would be surprised if she transfers. She swims for Ozzie, and they’re clearly doing something right.

How does Margo keep her newly appointed job given all of these transfers?

Not uncommon for transfers to happen, even lots of them, in all college sports when there is a coaching change.

The AD adores her from what the athletes there say. He probably does not care if she has only coached summer league for three months.

I am legitimately curious who will be left on the roster come the start of the fall quarter/semester. 12 – 16 walk ons?

Man this sounds like Arkansas’ 14 transfers..supposedly an internal investigation into the coach’s treatment of the swimmers but it has been quiet there..only 11 left before the new freshmen..

Same thing at Pittsburgh. Was told the HC was put on probation.

It really is crazy how close to the chest Arkansas is keeping everything…normally there’s at least a whisper of what’s happening in the swimswam comments, especially with how many articles have been put out in the last few months.

Almost like hiring someone with no coaching experience is a bad idea.