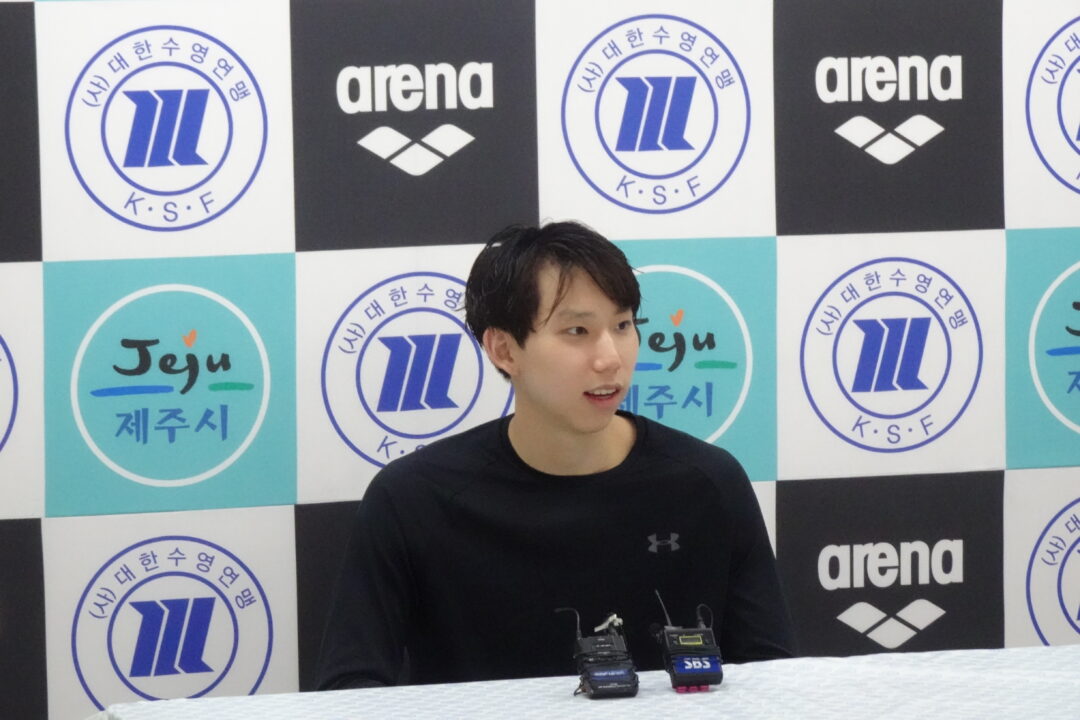 The Olympic roster for the nation of Korea continues to grow through 2 days of competition at their Trials at Jeju Multi-Sports Complex Swimming Pool.

Yesterday we saw Han Dakyung clock a new lifetime best and Korean national record of 16:26.67 in the women’s 1500m free en route to notching gold as the first member of the Tokyo squad. Today, 3 more swimmers followed suit, bringing the total to 4 with competition running through Monday.

We reported how 14-year-old Lee Eunji led the charge, with the teen reaping gold in the 200m backstroke. The youngster touched the wall in a super quick effort of 2:09.87, a mark just .38 outside the national record Lim Dasol set 2 years ago. You can read more about this impressive swim here.

On the men’s side, Cho Sungjae fired off a new national record in the men’s 100m breaststroke, first in the prelims, then in the final. Cho notched the top-seeded effort of 1:00.11 to land lane 4 before ripping a monster PB of 59.65. In doing so, Cho became the first-ever Korean man to dip under the minute threshold in the 100m breaststroke.

With his effort, Cho now ties American Cody Miller as the 19th fastest performer in the world this season and sits just outside the list of top 10 Asian performers ever in the men’s 100m breast event.

Additionally, on the men’s side, Hwang Sunwoo busted out a near-lifetime best of 48.38 in the 100m freestyle prelims. Splitting 23.47/24.91, Hwang’s outing here fell just .12 shy of his own Korean national record of 48.25 he produced last November.

As the only racer to dip under 49 seconds, 18-year-old Hwang once again cleared the FINA ‘A’ cut of 48.57 needed to qualify for this summer’s Olympic Games. We’ll keep an eye on what the teen does in tomorrow’s final.

It is crazy that prior to the LZR there were only 4 under 1:00. In ’08 there were 8, then like 20ish more in ’09. Now 59.9 puts you barely top 100 all time and over 3 seconds off the WR, and ~30 countries have records under 1:00. That said, Korean swimming is definitely on the up and Cho could for sure semifinal at the Olympics with a hold or modest drop.