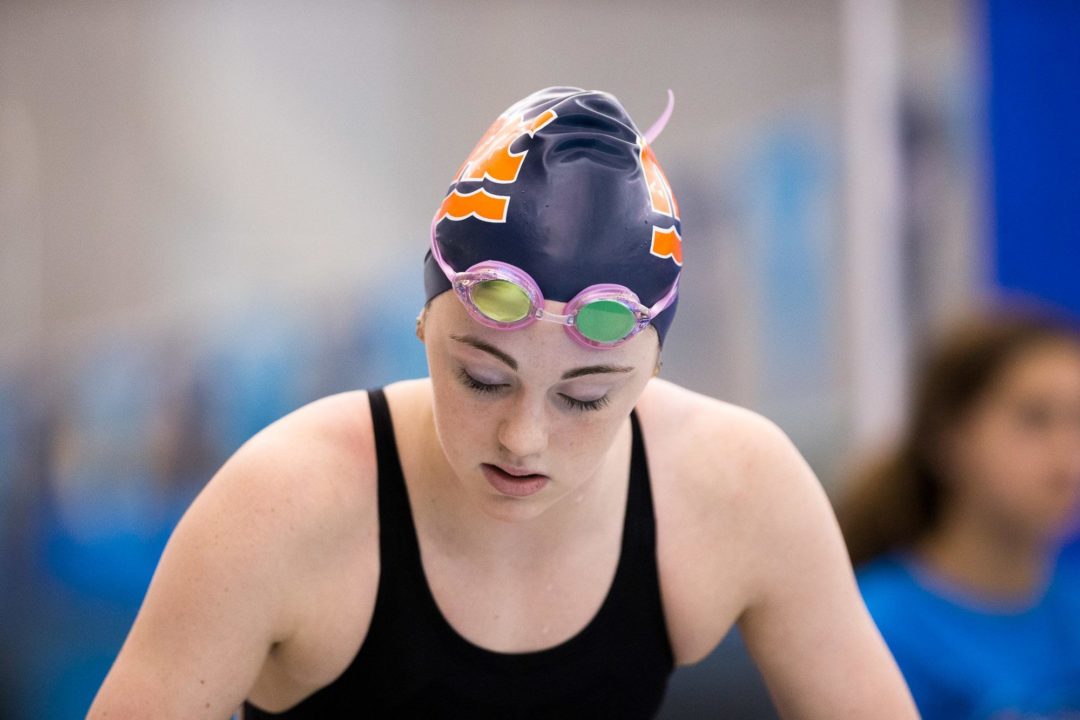 Charlotte Catholic has now won titles in three different state classes. They won the first 1A/2A title in 2002, when the state first split into three classes, then won three more years there before moving up to 3A. 8 more consecutive state titles later, the team moved up to 4A in 2014, winning their first title in the state’s biggest class.

This year made it back-to-back 4A titles with a 44-point win over William A. Hough.

The boys side, meanwhile, was a nailbiter, with South Mecklenburg barely holding on for the win by two points over Green Hope.

Charlotte Catholic rolled to title #14 on an undefeated night from Nora McCullagh. The current SwimMAC-er and future Texas Longhorn won the 50 free and 100 back, though she couldn’t quite match her own 2014 state records in either event.

Also winning for Charlotte Catholic was Michigan commit Becca Postoll, who took the 500 free in a timed final in the morning. Postoll was 4:47.02, beating Hough’s Erika Brown by about four and a half seconds.

Brown set the meet’s first state record in finals, though, going 1:46.47. That knocked her former Hough teammate Jessica Merritt off the books – Merritt’s old record was 1:47.37.

Two more class 4A and overall state records fell during the meet. First was diver Kristen Hayden of Panther Creek, who scored 507.55 on 1-meter to become the state’s first diver ever over the 500-point barrier. Then Roberson’s Alyssa Arwood cracked the 100 breast mark with a 1:02.10, just barely squeaking under the 1:02.17 set in 2010. Arwood is a Duke commit for next season.

Charlotte Catholic won a pair of relays to seal their team win. Erin McCullagh, Sara Stranick, Nora McCullagh and Postoll went 1:43.70 to win the 200 medley relay, getting a great back half from Nora McCullagh and Postoll. McCullagh was 24.77 on fly and Postoll 22.86 on freestyle, and the team just missed the state record by three tenths. Charlotte Catholic also went 1:33.68 to win the 200 free relay, though names and splits are unavailable on Meet Mobile. That time is just about four tenths off the team’s own state record from last year.

Hough’s Emily Allen won twice to earn her team second place. Allen was 49.85 to win the 100 free, two tenths off her own state record. The Tennessee Vol commit also anchored the winning 400 free relay, going 50.13 to help her Hough crew go 3:25.51 in the morning timed final.

South Mecklenburg pulled out a narrow team win without winning a single event, a testament to the program’s depth.

The team did come very close to a title in the night’s opening event, the 200 medley relay. Anchor Graham Weaver rocked a 20.74 split, making up over a half second on the leaders from Reagan. Both programs challenged the state record, but it was Reagan that got the touch, going 1:33.51 to South’s 1:33.82. The old record was 1:33.67.

Neil would go on to win the 100 breaststroke individually, putting up a 57.36.

Cary’s Justin Ress was named Swimmer of the Meet after winning two events. Ress took the 500 free during timed finals in the morning session (4:29.08), just outlasting Hough’s Trey Poff. Ress and Poff will be teammates at NC State next season. Ress came back at night to win the 200 IM in 1:49.36 over Myers Park’s Jackson Smith.

Green Hope nearly caught South Mecklenburg for the team title. Alexander Carson won the 100 free for Green Hope in 45.54, and then the team’s 200 free relay also triumphed with a 1:25.02, getting a 20.59 split from Carson. South Mecklenburg was third in that race.