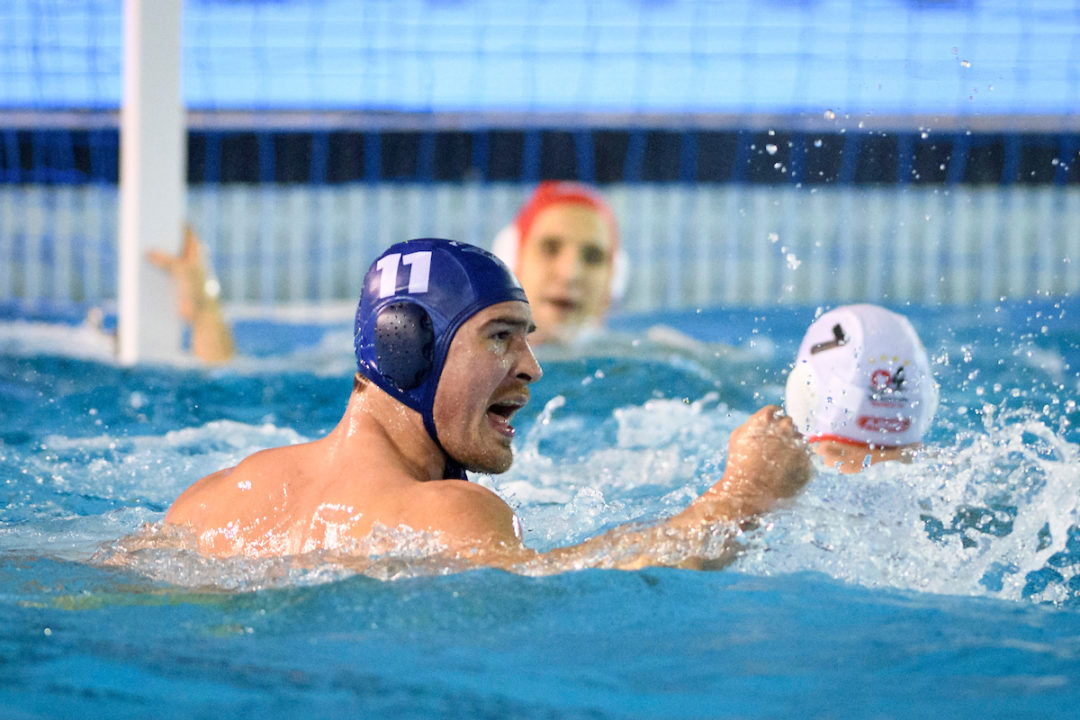 After downing Olympiacos two days ago, Marseille added Jug to its list of casualties by beating the Croats in an epic 28-goal game. Current photo via © P.Mesiano/Deepbluemedia/Inside

While in Group B Barceloneta, Brescia and Ferencvaros practically secured their F8 berths after six rounds, Group A doesn’t stop offering stunning results. After downing Olympiacos two days ago, Marseille added Jug to its list of casualties by beating the Croats in an epic 28-goal game. The Greeks almost suffered another surprising defeat in Ostia but a goal 14 seconds from time saved at least a point for them against Spandau.

Marseille began the season with high hopes after contracting more greats to boost their line-up which had been strong enough to win the Euro Cup in 2019. However, they left Ostia empty-handed in December – they played tight matches with Recco (9-11) and Jug (10-11) but lost both than suffered a surprising defeat from Ortigia. Now they showed some character and strength – though they could claim a single point against Spandau, then they caught Olympiacos, forced Recco to another extremely tough battle and now they crowned this ‘middle phase’ with a fantastic win over Jug. Beating the 2016 and 2018 champions in three days is quite a feat – and the French just did that.

It was an epic 28-goal game, not a full appraisal of defences but pure entertainment for the fans. Ugo Crousillat’s double was important towards the end of the first, the second indeed just beat the buzzer, for 5-3 and Igor Kovacevic made it 6-3 early in the second which gave confidence for the French side. Soon they were 9-4 up – Jug’s goalie Toni Popadic was substituted after the 8th as he stood 1/9 – but the Croats put everything together and netted three in 101 seconds so it looked much better by halftime at 9-7.

After a three-minute fight in the third Jug got even closer with Hrvoje Benic’s blast and after a killed man-down the Croats had a man-up to go even but hit the post – while Ante Vukicevic, Marseille’s Croatian star, sent the ball home from the distance for 10-8. That lifted his team’s spirit, also broke their goalless phase after 7:54 minutes, so they didn’t get too tense when Jug managed reply twice and only a single goal separated the sides before the last interval (11-10).

One missed man-up at both ends opened the fourth, then Vukicevic made a clean job in the next 6 on 5. Again missed extras came before Romain Vernoux converted another for Marseille and in 32 seconds Vukicevic finished a counter to extend the gap to four with 3:50 remaining. It looked like a mission impossible but Jug almost made it: scored three from their next four possessions so it was 14-13 and 1:23 to go. Soon they got the ball but a turnover foul halted their efforts and Kovacevic’s 6m shot closed down the contest 19 seconds before the end.

Tensions didn’t cease in the second game either. Though Olympiacos took a flying start, Spandau levelled the score and only a late goal one second before the buzzer gave the Greeks a 3-2 lead before the first break. Soon came the first big twist as the Germans produced a brilliant second period, netted two in 72 seconds at the beginning, kept the Greek offense at bay for the entire quarter while adding one more later to lead 3-5 at halftime. Soon they were 3-6 up and Olympiacos was in real trouble. They finally could break their silence after 11:10 minutes and that was their wake-up call, toward the end they came up with a whirlwind, three more goals in just 80 seconds, the last two from counters, and they rushed ahead at 7-6. But the Germans managed to find a calming goal from a man-up 11 seconds before the end of the third to level the score at 7-7.

The fourth turned into a tremendous fight. Olympiacos earned a man-up but hit the post and soon their centre-shot was also denied by Spandau’s goalie Laszlo Baksa. In the middle of the period Lucas Gielen’s brilliant shot from the wing gave the lead back to Spandau and the Greeks tried in vain to get the ball past Baksa. When they missed their next (and last) man-up with 1:20 remaining and the second shot was saved, it was ‘trouble-time’ again. The Germans couldn’t secure their win and with 40 seconds from time Olympiacos had a last ball after a time-out. And they just copied the action which had brought Spandau the goal earlier, their US national team player Peter Daube let the ball fly from the left wing 14 seconds to go and that saved at least a point for the Greeks. Indeed, they were celebrating and hugging each other at the bench after the buzzer – a loss would reduce the gap to 3 points between them and the Germans, now it remained 5 before the last tournament in April.

The final match of this March rendezvous was the local derby which turned into a one-sided contest as Ortigia ran out of ideas, energy and perhaps desire. Recco didn’t give any mercy for the fellow Italian team – though at first they seemed to offer some by keeping Croatian world champ Marko Bijac on the bench but the reserve goalie Tommaso Negri did an amazing job in Recco’s goal. He kept his house clean for 21:10 minutes, was 7/7 while his mates netted seven in front. Ortigia had a brighter spell after 7-0 and came back to 8-3 by the end of the third, but could not add more in the last eight minutes. After qualifying in November and offering some promising performances December, they left Ostia with four straight defeats this time – and have only slim hopes to achieve even bigger things as a newcomer.

The schedule of Group B didn’t promise hot clashes, rather three must-win matches for the favourites. And they all passed their respective tests with ease – first in the morning in the hotel where all staying inside the bubble had to undergo the usual procedure, then in the pool in the afternoon. The results were negative in the first part of the day and positive in the second.

Brescia was the first to clear the hurdle and they didn’t have any problem while downing Dinamo. The Georgians could improve in scoring somewhat after the opening day’s nightmare when they netted three in the last 95 seconds against Hannover. They had 4 against Ferencvaros and 6 against Brescia – though the number of conceded goals also grew: 10, 11, now 14. On the other end, the Italians claimed their third straight win here, all were easy ones against the lower ranked sides which may have served them as a warm- up for the big game on Friday against Ferencvaros. Today Brescia was dominating, outshooting the Georgians 34-21 in total, the number of shots on goal was 23-13 – the outcome was inevitable.

Barceloneta had a bit more problems against Hannover as the Germans did not do the favour of cracking down. At the beginning it looked like another fine afternoon for the Spaniards, they jumped to a 3-0 lead early on and went 6-2 up in the second so all seemed to be set. But it wasn’t as Hannover always climbed back whenever their rivals opted to push the gas pedal a bit lighter. So even though Barceloneta rushed ahead again to lead 8-4, the Germans used their chances and trailed only 9-7 before the final period. They had a couple of possessions to further reduce the distance in the fourth but could not really penetrate the Spanish defence in the first two minutes. Then the favourites slowly but safely regained full control and sailed away with three points by adding three goals and conceding only one, 6 seconds before the end. Still, from Hannover’s angle this 8-12 looked way better than the 8-16 in December.

Ferencvaros began its match versus Jadran similarly as on the previous days, playing with patience and discipline. By putting away the extras plus delivering a couple of action goals they jumped to a 4-1 lead after eight minutes. But unlike a day earlier when they had carried on scoring and decided the encounter against Dinamo by halftime, they started missing their man-ups and Peter Tesanovic added more great saves in the second period. The Montenegrin youngsters smelled blood and soon it stood 4-3 and they even had a possession to go even. Then, after a drought of 7:12 minutes, Vendel Vigvari netted one from the distance and in the dying seconds he managed to put away a man-up too, though it was only confirmed during the break after a video-review. Vigvari, a 19 year-old struggling here in the first two days, was on fire, hit his 4th early in the third and when Nikola Jaksic bagged one more for the title-holder, the game was virtually over at 8-3. Jadran could halt its bad run after 9:05 minutes but the home side took care of keeping the ‘safe distance’ while they also tried to save the key players’ energy for the last day’s crucial clash with Brescia.