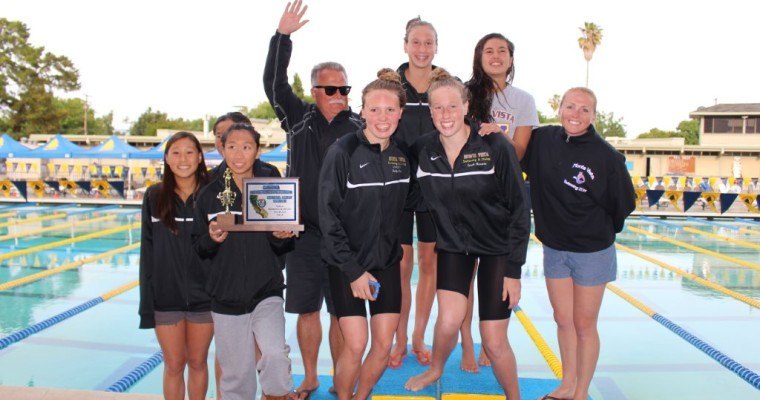 Seven swimmers and a diver. Two hundred twenty-six points. The Monta Vista girls worked together to get the most out of every swim and dive, as individuals and as a team, and came out on top.

Top-seeded Jennifer Campbell of Gunn improved on her prelim time and won the 200 free in 1:47.10. Cal commit and Willow Glen senior Catherine Ladd finished second in 1:48.33, her best time in over a year. Sarah Shimomura of Mitty took third with 1:48.76.

In her last high school outing Sacred Heart’s Howe, who will swim at Stanford next year, went after the CCS record in the 200 IM. She had quite a bit of company through the first 100: Burlingame senior (and Duke commit) Leah Goldman led the field with 54.97, Howe turned second at 55.49, and both Sophie Krivokapic-Zhou (Santa Clara) and Chloe Isleta (Presentation) were just .10 back at 55.59. Howe opened it up on the breaststroke leg, splitting a 34.5, then brought it home with a 27.7 free. Her final 1:57.75 was the fastest by two seconds and good enough to break Jasmine Tosky’s CCS record of 1:57.94 from 2009. Goldman was just able to hold off Krivokapic-Zhou for second, out-touching her 1:59.82 to 1:59.85.

In the 50 free freshman Grace Zhao of Palo Alto held onto her top seeding and finished first with 23.26. Monta Vista pulled to within a point of Cupertino and Sacred Heart, who were leading the team race at that point, when seniors (and future UCLA teammates) Sarah Kaunitz (23.35) and Carly Reid (23.39) finished second and third, respectively.

Current CCS record-holder in one-meter diving, USC-commit Alexa Cacao of Milpitas, won the diving with 487.30 points. Sophomore Mimi Lin of Palo Alto and junior Qianyi Pang of Monta Vista finished second and third, separated by .55 points, 459.10 to 458.55. By now Gunn had jumped into the mix, with 79 points to Cupertino’s 81. But Monta Vista had taken over at the top with 86.

The 100 fly was an exciting race in which most of the field was out together at the 50 and the strongest second half would determine the winner. That turned out to be Burlingame’s Goldman who split 25.8-28-low for a final 54.06. Right behind her were juniors Alex Grimes of Los Gatos (54.46) and Heidi Katter of Castilleja (54.48). At this point in the team race Monta Vista held the lead by one point over Menlo-Atherton.

Sacred Heart’s Howe, who had broken the CCS record for the 100 back in prelims, but more importantly, had also broken Missy Franklin’s national independent school record with that same swim, took another .30 off her time in finals. She split 24.79-26.75 for a 51.54. Franklin’s national record had been 52.30. Santa Clara’s Krivokapic-Zhou and Isleta of Presentation finished second and third, respectively, with 54.08 and 55.44.