Cardinals Continue To Fly Away From Competition At UofL Invite Prelims 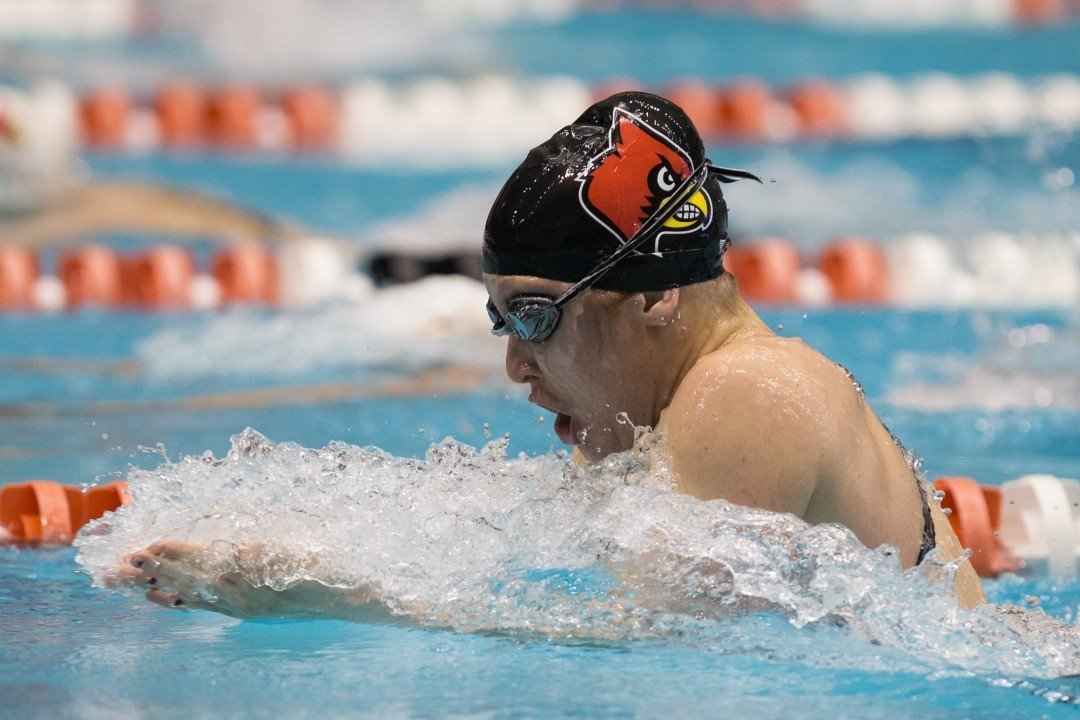 The Louisville Cardinals continue to light up the pool as they take on Ohio University, Wright State University, Illinois State,...

The Louisville Cardinals continue to light up the pool as they take on Ohio University, Wright State University, Illinois State, and Kenyon College at the 2015 UofL Invitational. The Cardinals earned the top seeds in every event for the consecutive day. Although there were no individual “A” cut times, several swimmers will likely be locked into NCAA’s with quick prelim swims.

Freshman Rachel Bradford-Feldman started the session with an NCAA “B” cut time of 4:13.82 in the women’s 400 IM, giving momentum to the 200 freestylers. On the men’s side, Ryan Massey earned an NCAA B standard with the fastest time of 3:54.49. We were also told that Senior Nolan Tesone will be time trialling the 400 IM tonight. He was 1:44.07 last night and is expected to push it tonight.

Mallory Comerford held down the 100 butterfly for Louisville in Kelsi Worrell’s absence. The freshman posted the top time of 53.32. Pedro Coutinho pulled out the victory in the men’s 100 fly with a solid 46.36.

The freestylers were on a mission this morning. Andrea Kneppers posted a 1:45.00 in the 200 freestyle. That time is about a second under the slowest invited time to the NCAA Championships over the last three years. On the men’s side, Trevor Carroll and Matthias Lindenbauer finished first and second in the 200 freestyle, both finishing under the previous meet record. Carroll posted the fastest time of the morning with a 1:33.67, missing the A standard by .3, and Lindenbauer was just behind him with a 1:34.54.

Andrea Cottrell just missed the A standard in the 100 breaststroke with a 59.27. She was the only swimmer under one minute this morning. Carlos Claverie was also strong in the breaststroke, earning the t0p seed with his time of 52.88.

In the backstroke, Grigory Tarasevich and Aaron Greene both finished under 47 seconds at 46.08 and 46.82, respectively.