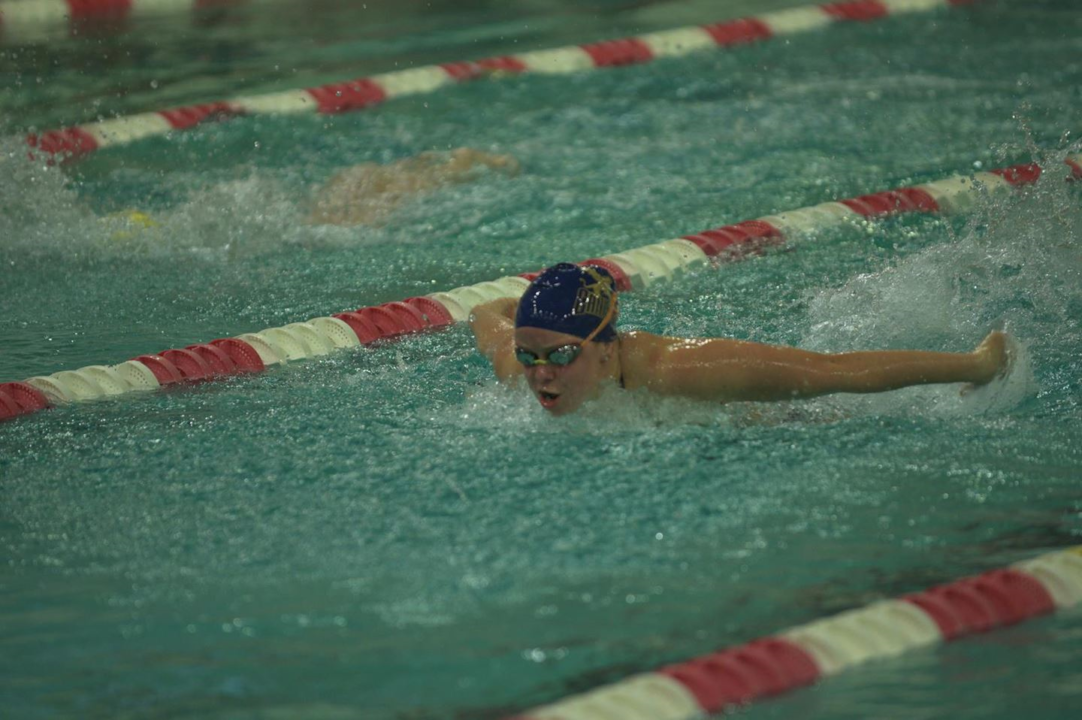 The Canisius men’s and women’s swimming and diving teams earned a victory to open the season against Rochester Friday evening. The Canisius women won by a score of 193-102, while the men’s team earned a 153-141 victory over the Yellowjackets.

The women’s team claimed top spots in 11 of the 14 races on Friday. Junior Dana Bender led the way for Canisius with four first-place finishes in the 400-yard medley relay, the 50-yard backstroke, the 100-yard backstroke and 200-yard IM.

The men’s competition was separated by one point heading into the 200-yard freestyle relay. The Golden Griffins won the race and the meet thanks to the first-place finish of the relay team of seniors Kenyon Winkky, Kyle Griffin and sophomores Kyle Kimerer and Liam O’Connell.

Winkky had a standout day for the Griffs, earning first in all four of his events, including the 400-medley relay, the 100 fly, the 50 fly and the 200-yard freestyle relay that secured the victory on the men’s side.

Both the men’s and women’s swimming and diving teams will return to action on Oct. 18, when the Griffs host MAAC foe Marist. The meet will be held at the Burt Flickinger Center Pool and has a start time set for 10 a.m.

BUFFALO, NY – The first meet of the season had no shortage of drama for the University of Rochester men’s swimming and diving team as its matchup with Division I Canisius College came down to the final race on Friday night at Erie Community College.

The host Golden Griffins edged out the top two places in that final race, the 200 freestyle relay, to post the victory 153-141 over Rochester on opening night, rallying from one point down entering that last event.

Rochester showed it could hang with Canisius throughout the night, posting 1-2-3 sweeps in four events, the 200 IM, 100 backstroke and both the 1-meter and 3-meter diving events.

Eric Sonheim finished first in the 200 freestyle, clocking in with a time of 1:46.36, while Grant Yap was runner-up, touching in 1:50.85.  Yap finished runner-up in the 100 freestyle as well, finishing just ahead of third place swimmer Trevor Hoch.

On the 400 medley relay which opened the event, Bushnell, Liu, Domanico and Yap ended second in 3:37.75.  The 200 freestyle relay finished third in 1:28.96, with those four swimmers being Sonheim, Chang, Hoch and Yap.

Monica Jackson got her senior campaign off to a strong start by winning two individual events for Rochester in a season-opening women’s swimming meet at Canisius College on Friday evening.

Canisius won the meet, 193-102, but the Yellowjackets were first in the 50-yard and 100-yard breaststroke events. Rochester finished among the top three in nine individual events, two relays, and both diving competitions.