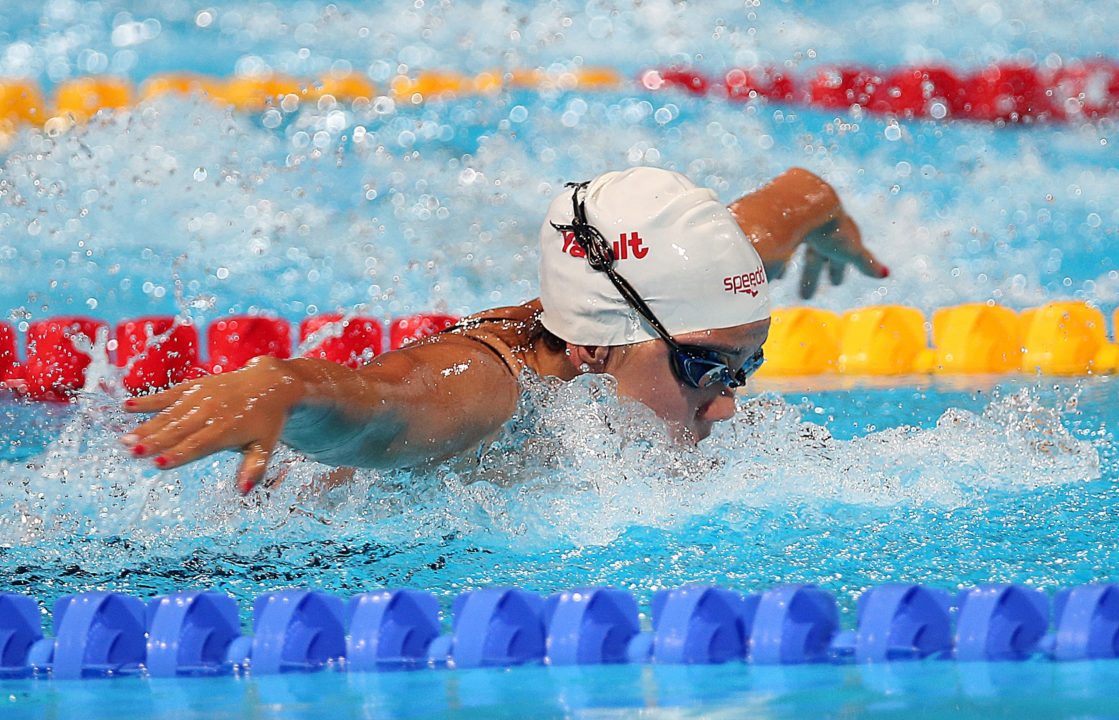 The top recruit in the class of 2014 out of Canada, and probably one of the top 10 recruits period, Noemie Thomas has decided to come to the United States to train collegiately, and specifically with the Cal Golden Bears.

“I am very excited to swim and represent the Golden Bears,” Thomas said of her decision. “Teri (McKeever) and Kristen (Cunnane) are the best match for me in terms of coaching and and personality.  I felt so comfortable around the team and I know that at Cal I can reach my full potential both as an international swimmer and a young woman.  I cannot wait to join the Bears next fall!”

Her short course meters times show that she should translate extremely well to NCAA swimming, though she’ll have to get used to the slightly-shorter yards pool. In short course meters, she’s been 25.60 and 56.64, both of which are Canadian National Records, and took 4th in the 50 at the 2012 Short Course World Championships (including ahead of former NCAA butterfly stars like Christine Magnuson, Claire Donahue, and Triin Aljand).

In yards, her short course meters times translate to roughly 23.0, 51.0, and 1:56.0. Those sprint times are what’s really special: if the conversions hold up, it would make her an immediate contender for the NCAA championship.

Simply put, nobody currently in the NCAA has been faster than Thomas in the 100 fly in long course, and nobody has really even been close (as far as we can tell, Texas A&M’s Caroline McElhany with a 58.5 is the next-best among active NCAA swimmers).

Thomas only stands about 5’3″ tall, but in the world of butterfly swimming, height, while always an advantage, has not historically been quite the limiting factor that it might be in, for example, the sprint freestyles. As seen in this video, Thomas makes up for her height by being lightning-quick off the blocks and strong underwater. She also has a relatively high turnover as compared to many of her competitors, and her more compact frame allows for that without losing anything on her pull.

Among other bullet-points on Thomas’ resume:

😆
It’s very funny to follow all this recruiting period.
The “war” between Stanford and Cal continues. Except perhaps Georgia, it seems the other teams are not in the same world.
Huge pick for Cal. Miss Thomas is a world class swimmer.

The NCAA allows 14 total equivalent scholarships per Div I women’s team (men only 9.9 to meet Title IX rules). Based on the size and talent depth of Cal’s roster the average existing team member or recruit must be getting only 35% to 50% scholarship. This would factor in that some extremely high level swimmers, like Missy & Bootsma, are getting full rides.

You will never get parity in Div I NCAA swimming, if most all the high level talent is willing to accept much less money in order to attend one of the existing top programs.

35-50% That’s way too generous. There are girls on that team swimming for books ($1000) and ZERO. Guess it’s just because they want to train with Teri?

Scholarship money in the form of “full rides” goes first and foremost to the foreign swimmers, who are not eligible for Federal student loans or most financial aid offered at “public” universities. If you look at the Cal website, that means @ $53,000 tuition and fees per year. Also, most US universities require a student to carry health insurance, either under their parents’ policy, a private policy through a US health insurance company, or through the university health system (if they have one). Since foreign countries do not have “health insurance policies”… Read more »

I agree with Momojamo that it’s a puzzle why Canadian swimmers would head to the US for an education when Canadian schools are so much cheaper, and as good as US schools. With the emphasis on short course training in the NCAA system, it’s not necessarily a good thing for their athletic careers if they want to make international teams back home. Of course, I wish the best of luck to Noemie Thomas at Cal.

Catherine, I don’t think it so much a puzzle. Being able to cherry-pick and attend one of the top universities in the world in Cal, which some don’t realize is UC Berkeley, as well being able to marry elite swim training and competition seems like a pretty easy choice even if one must pay for some or all of the tuition.

Schools like Toronto, UBC and McGill are certainly well respected internationally, but don’t offer the same competitive swim advantages that a Berkeley (or Stanford, etc.) offers.

She, and others, have a chance to attend an internationally recognized Top 10 university in the world AND train with Olympic Coach McKeever, and olympic medalists Natalie Coughlin, Missy Franklin, Rachel Bootsma, Elizabeth… Read more »

Your reply reflects some of the difference in thinking between the American and Canadian approaches to swimming after high school. In the US , the focus in sports is almost entirely on NCAA competition. In Canada, the universities don’t even pretend to offer the emphasis on sports that US universities do. High level competition is still through the club system. Look at almost all of the international medalists for Canada in the past few years – Hayden, Cochrane, Caldwell, Savard, Weinburger, Hedlin – and you’ll see that they all trained in Canada. I’ve spoken to a few Canadian coaches who are unhappy about the swim drain to the US.

Congrats to Noemie, Teri, and Kristen.

Hopefully McKeever can get the complicit mainstream press to lobby the NCAA to replace diving and distance events with fly and back relays.