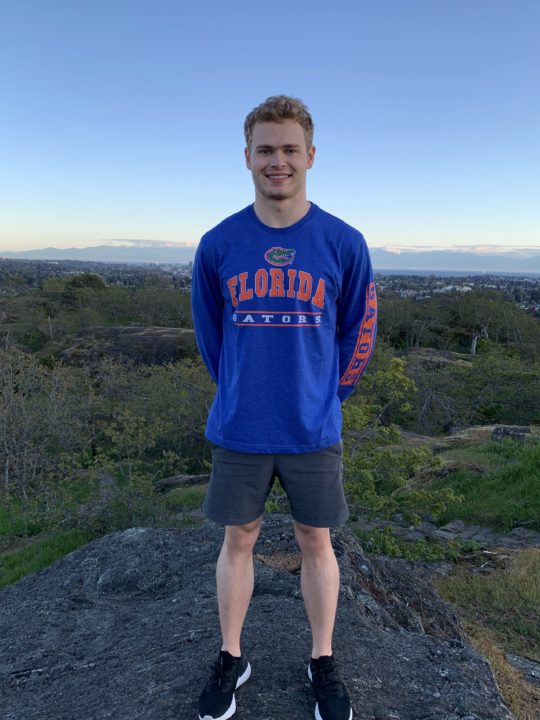 Erik Harper sat out the 2019-2020 NCAA season after spending his first 2 years at Hawaii. Now he'll transfer to Florida with a new focus on the breaststroke events.

I am incredibly proud to continue my athletic career and study at the University of Florida. Thank you to Coach Nesty and Coach Jungbluth for the warm welcome during my visit. Thank you to my coaches, family, and friends for all the support throughout this journey. Go Gators!

Harper says he’ll shift his focus to the breaststroke races at the University of Florida, a stroke where he made big progress in his season off from collegiate racing. In an unsanctioned time trial in mid-March, just as Canada was shutting down, he took 4 seconds off his previous lifetime best in the 100 breaststroke.

Harper’s time trial swim in the 100 breaststroke in short course meters converts to a 58-mid in yards.

As a freshman, Harper was on the non-scoring team at the MPSF Championships for Hawaii, and as a sophomore he didn’t swim at the meet, finishing his season at the Carlsbad, California Sectional Championships instead.

Dillon Hillis had a breakout sophomore season for Florida in the breaststroke, bringing some stability to that leg of the Gator medley relays after a few rocky seasons. He had the fastest time in the SEC last season in the 100 breaststroke, though it was in prelims of the SEC Championships. He ultimately finished 3rd at that meet, with the two swimmers ahead of him Itay Goldfaden (South Carolina) and Liam Bell (Alabama) not expected to return next season as the result of a graduation and transfer, respectively.

Harper trains in Canada with the Pacific Coast Swimming Club in Victoria, British Columbia. As a prep swimmer, he was a Canadian National Age Group and Canadian Western Championships Qualifier. He holds a British Columbia record in the 4×50 long course mixed medley relay. He was the team captain and MVP of his high school team, Glenlyon Norfolk High School, as both a junior and senior.