Can Phelps Swim 100 Miles in the Ocean? A Look at Some Famous Open Water Swims 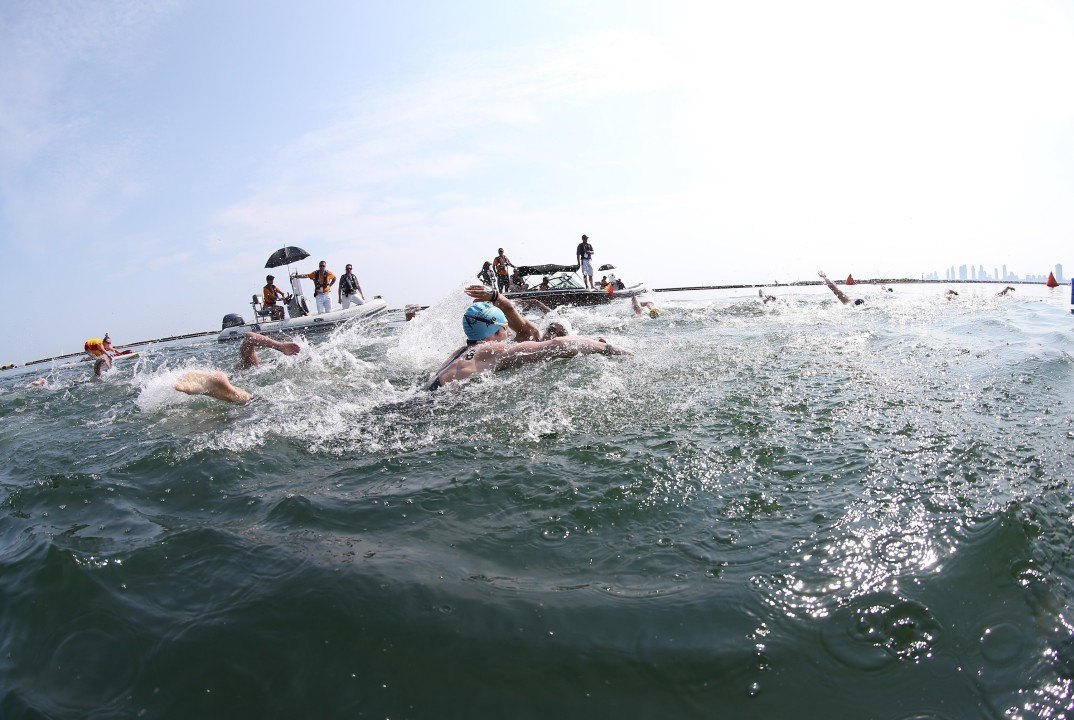 Rapper Young Thug's tweet asking Michael Phelps if he could swim 100 miles in the ocean prompts a look at some of the most famous open water swims. Stock photo via Chris Tanouye

On a quiet Wednesday afternoon, Atlanta rapper Young Thug gave the swimming community a big question to think about. Could Michael Phelps swim 100 miles from the middle of the ocean back to shore?

Young Thug has been nominated for four Grammy Awards and won a 2019 Grammy for Song of the Year as a cowriter and performer on Donald Glover’s song This Is America. His music has won two MTV Video Music Awards, three American Music Awards, and three UK Music Video Awards. His two albums, So Much Fun (2019) and Punk (2021) both reached #1 on the Billboard Music charts in the US.

Even before Phelps responded saying that he thinks he could make the swim, the tweet prompted a wide range of discussion. There were lots of factors to consider: the context for the swim, is he supported, what the weather and current are like. Some are focused on the actual question–ASU’s associate head coach Herbie Behm even helpfully provided some breakdown of the math.

At SwimSwam, it got us thinking about the most famous open water swims in history.

The English Channel has been one of the pinnacles of open water swimming for a long time. Captain Matthew Webb became the first person to swim the English Channel on August 24, 1875–147 years ago. It took him 21 hours and 45 minutes to swim the channel, and his success was celebrated around the world. Since then, it’s become the ultimate test for competitive swimmers and non-competitive swimmers alike.

However, there’s much more to open water and marathon swimming than the English Channel. Pablo Fernandez holds the Guinness World Record for the longest ocean swim at 250 kilometers, which converts to 155.34 miles. He set that mark in July of 2021, beating a 15-year-old record.

In 2008, the Oceans Seven challenge was created, which was devised as the equivalent to mountaineering’s Seven Summits challenge. The challenge consists of seven channel swims, and the first person to complete it was Stephen Redmond on July 14, 2012. Since then, twenty others have completed the Oceans Seven.

In 2019, Becca Mann became the first person to complete the Triple Maui Nui Channel swim, which had only been attempted by one other person. It took her 20 hours and 53 minutes to swim approximately 40 miles.

As for Herbie’s math? For starters, it ignores one crucial detail, which is currents. FINA’s longest competitive race on record was 88km, or almost 55 miles. It is swum on the river a river Paraná in Argentina between the cities of Hernandarias and Paraná. The top swimmers finish in around 9 and a half hours, which is about 38 seconds/100 meters. For anyone keeping track, that’s faster than the World Record over 100 meters, and shows that pool times aren’t always a clean translation to open water times.

Ricardo Hoffman is credited with the longest river swim at 299 miles by the Longswims Database. Some questions in the replies were regarding the plausibility of swimming for more than 24 hours straight – but that’s not as big of a hurdle as it seems like. 24 hours of straight swimming, depending on conditions, is barely enough to register on longswim radars anymore – the top 150 list of longest continuous non-river, open-water swims by duration begins at 24 hours. Sarah Thomas once swam for 67 straight hours in Lake Champlain and sits at the top of that list.

In 2021, Neil Agius of Malta swam for 52 hours from Linosa, Italy to Malta in 2021 non-stop and unassisted, and that only ranks 8th in the Longswims Database for documented, nonstop, unassisted, non-river swims.

Conditions are king when it comes to measuring open water races, and open water aficionados love parsing swims by the qualities of the waters they’re raced in (temperatures, currents, directions).

Phelps almost certainly had the physical talents to swim for 100 miles continuously, especially with the right conditions and currents, but he wasn’t necessarily trained for it – mentally or physically. Could he do it today, six years after retirement, as laid out in the Tweet? Almost certainly not. And he’s not even the best-qualified swimmer in the world to do so (though he’s often held up as a standard for “not even the best swimmer in the world could…”).

So, what do you think? Could Phelps complete the swim? What are your favorite long distance open water swims?

I don’t think the guy could make it, But we know Sarah Thomas can and has. She’s the best swimmer in the world This last year SST Doubled The North Channel. No Human has ever done that before. Man or Woman. Also SST Crossed The English Channel 4 times! ,,, In one continuous swim! No human has ever done that before either. Also SST swam the longest current neutral swim ever, 104 miles. SST is the best!
Plus she’s a very kind and thoughtful, intelligent lady. SST stands for Super Sarah Thomas.

I have swam against Sarah Thomas and she has told me her regiment.

If Michael Phelps, we’re super serious, swimming upwards of 40-60 miles a week, (something that has been done before) for a few years, maybe he would have a chance.

However swimming in the Olympics in a 78 degree pool for events 1500 meters or shorter is vastly different than ocean, lake, and river swimming in all weather conditions.

Conclusion: maybe if he spent endless hours swimming he might have a chance.
(Probably won’t happen)

Robert Finke would do it, and he’d sprint the last 50 meters.

I’ve swum around Manhattan Island several times; I’ve competed in the Around the Island, Atlantic City professional race; I was World Champion Paul Asmuth’s training partner in the English Channel for 3 weeks and I was on his boat when he broke the English Channel Men’s Record. My favorite open water swim is the Pt. Bonita Swim – 10 k in S.F. Bay with the Golden Gate Bridge midway. The actual distance is 7.5 miles but 10 k rhymes better. This swim starts at the end of the Marin Headlands / the N.W. corner of the Strait of the Golden Gate. We swim the length of the Strait of the Golden Gate, under the Golden Gate Bridge, and that much… Read more »

This is a case of numbers not meaning much to the average person after a certain point. I’m a lifelong competitive swimmer, swam in college, and though I’m not in GREAT shape, I was doing 3k workouts 4-6 × / week before doing a 10,000 (yard) swim, or just under 6 miles. I became hypoglycemic at 9k. It was brutal. Now Phelps’ threshold, even now, is many multiple times mine, but his body would break down WELL before 100 miles. 100 miles is over 170,000 yards. That’s 1,700 × 100 (I can hardly imagine). He’s also skinny, which is a factor. SwimSwam just covered an article of an OW swimmer hallucinating during a tahoe swim (I think 21 -ish miles?).… Read more »

Michael Phelps is an amazing swimmer… in the pool! He may also be an amazing open-water swimmer, but proof of that is on him. I look forward to hearing more about this and I wish him well!

I don’t know. I’d be more confident Erik Vendt could do it.

This thread has the highest up/down % I think I’ve ever seen. Well done ya’ll.