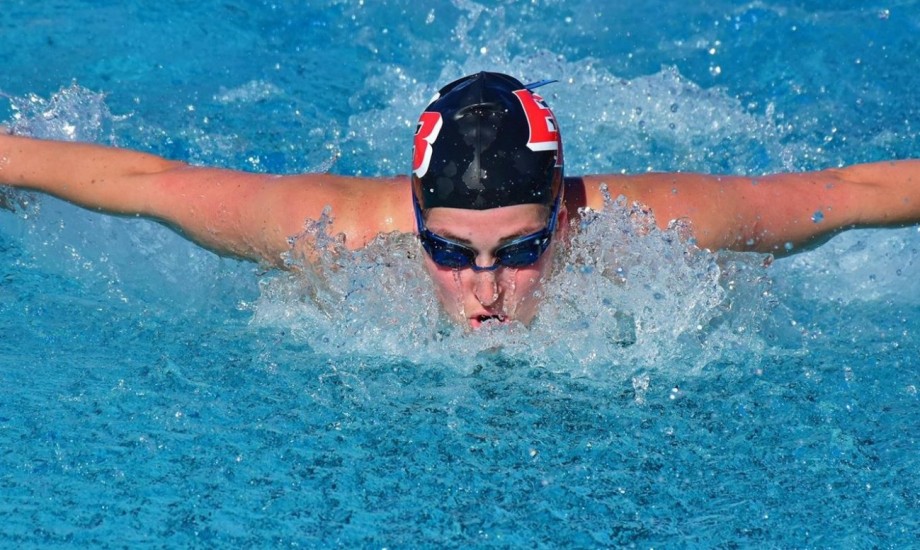 The Pioneer women held on for a 43-point victory over Pepperdine, while the Banana Slug men won by just 4.5 points over Concordia. Current photo via Mark Stenholm / Pacific Swim & Dive Conference

AnnaKate Velasquez, a sprinter from Pearland, Texas, has committed to swim for DII Ouachita Baptist University. She will begin her collegiate career fall 2020.

MONTEREY PARK, Calif. — The Cal State East Bay women and UC Santa Cruz men repeated as champions of the Pacific Coast Swimming and Diving Conference on Saturday, following an exciting final day of competition at the 2020 PCSC Championships. The Pioneers won four events, including the 400 free relay to cap the meet, to earn a 43-point victory over Pepperdine in second place, while Biola took third. For the men, the Banana Slugs held off Concordia in second and Biola in third, winning the title by just 4.5 points, despite not winning an event on Saturday.

At the end of the day, the swimmers, divers and coaches of the meet were named. Fresno Pacific swept the Swimmer of the Meet honors as Olga Tovstogan and Iskender Baslakov both repeated as winners. Azusa Pacific’s Amy Crayne and Concordia’s Max Wickens collected the Diver of the Meet awards.

Tovstogan had yet another outstanding meet for the Sunbirds, winning three individual titles and helping two relay teams to wins as well. The junior from Kyiv won the 200 IM, 100 breaststroke and 200 breast, while also competing on the winning 200 medley relay and 400 medley relay. She also helped FPU finish third in the 200 free and 400 free relays.

After winning every event in which he entered, both individual and relay, Baslakov was a surefire Swimmer of the Meet. The junior from Minsk took home individual titles in the 50 and 100 freestyle and the 100 backstroke, while also helping guide the Sunbirds to wins in the 400 medley, 400 free and 200 medley relays.

Crayne dominated the diving events, winning both the 1-meter and 3-meter to help guide the Cougars to a fourth-place finish. The junior from Sacramento set a new meet record in the 1-meter with her score of 290.35, beating out her teammate and last year’s Diver of the Meet, Melia Stout, by nearly 16 points. In the 3-meter, Crayne led the Cougars to a sweep of the podium spots with an eight-point win.

As the only male student-athlete to both compete in diving finals and reach the A final in swimming events, Wickens demonstrated his versatility during the meet. After finishing third in the 1-meter diving, the senior from Mesa, Ariz., helped the Eagles win the 200 free relay before returning to the board in the 3-meter, where he finished fourth. He then capped his meet with a fifth-place showing in the 100 breaststroke.

The distance swimmers kicked off the final day of the meet as Cal State East Bay’s Peyton Wayment secured a crucial 32 points for the Pioneers, who began the day in second behind the Waves. Azusa’s Hannah Frey took second almost 16 seconds later, while Leah Robinson‘s third-place showing gave East Bay two in the top three to start the day.

For the men, Concordia’s Taylor Steffen claimed the title, beating out Biola’s Gabe Weber by just over five seconds. UCSC secured third-place points to help build on their lead in the team standings after Aaron Wood rounded out the podium spots.

FPU’s Arianne Kooijinga (2:00.4) collected her third individual title of the meet in the 200 backstroke after already having taken the 50 free and 100 back. Pepperdine’s Emily Morton (2:02.01) took second to keep the pressure on the Pioneers, who saw their Alondra Ortiz (2:04.3) get onto the podium in third.

The men’s 200 back finished in a dead heat after Concordia’s Braeden Glor and Biola’s Clayton Owens touched the wall simultaneously in 1:53.94 to tie for first. The Slugs’ Akira Morita finished just 0.25 seconds later to claim third and continue to help the team stay atop the standings.

The 100 freestyle was next and saw the top two teams in the standings duke it out for the podium spots. East Bay’s Allie Klinger (51.24) took the title after just missing out on the 50 free win earlier in the meet. The Waves’ Amy Griffin (51.87) and Julianna Birlin (51.92) in second and third, respectively, beat out Kelee Shimizu (51.99) to give Pepperdine a pair of podium spots.

Baslakov took home his third title of the meet in 100 free and missed setting a new meet record by just over three-tenths of a second with his time of 44.16. Concordia’s Austin Barton (45.30) followed in second, narrowly out-touching FPU’s Oleksandr Ivakin by just one-hundredth of a second to prevent the Sunbirds from claiming a one-two finish.

Tovstogan returned to the water in the 200 breaststroke, this time breaking a four-year-old meet record with her title-winning time of 2:12.85 and claiming a nearly nine-second win over APU’s Amanda Anderson (2:21.20). Pepperdine’s Kendall Brown (2:22.27) rounded out the podium spots.

The final individual event of the meet was the 200 fly. For the women, Cal State East Bay’s Victoria Zukeran scored 32 points for the Pioneers with a victory in 2:04.14. She was followed by APU’s Sydney Benveniste (2:05.58) and Emily Rigsby (2:06.15) in second and third, respectively.
The men’s 200 fly saw Biola’s Patrick Waggoner take the title with a time of 1:52.56, beating out UCSC’s Jack Schertler (1:53.3), who narrowly out-touched Concordia’s Kyle Benjamin (1:53.37) in third. The runner-up finish would prove to be crucial in helping the Slugs claim a 4.5-point victory in the team title race.