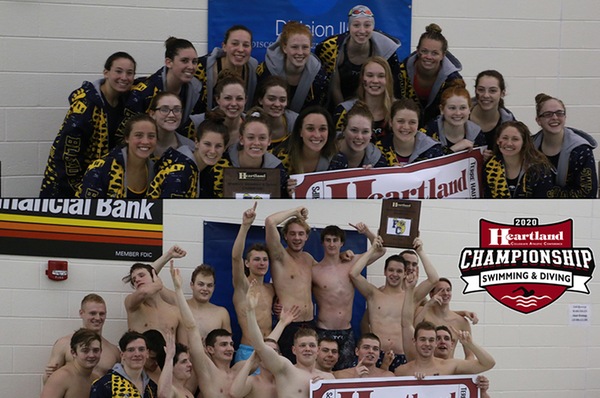 Franklin captured the men's title with a score of 721, beating out Rose-Hulman (713), while the women (832.5) more than doubled runner-up Transylvania (405). Current photo via Heartland Collegiate Athletic Conference

TERRE HAUTE, Ind. – The 2020 Heartland Collegiate Athletic Conference (HCAC) Men’s and Women’s Swimming and Diving Championships wrapped up on Saturday, with Franklin College sweeping the title for both the men and the women.

Franklin captured the men’s title with a score of 721, beating out Rose-Hulman Institute of Technology, who earned 713 points. Anderson University finished third with 215, Transylvania placed fourth with 191, Hanover placed fifth with 183 and Manchester University was sixth with 17 points.

On the women’s side, Franklin took the title with 832.5 points. Transylvania finished second with 405 points, Anderson took third with 356.5, Hanover finished fourth with 273, Rose-Hulman placed fifth with 232 and Manchester posted 90 points for sixth.

For the women, Transylvania University got things started with Mattie Fogle placing first in the 1650 freestyle with a time of 18:34.84. Caileigh McCafferty picked up Franklin’s first, first-place finish of the evening, posting a 2:06.60 swim in the 200 backstroke. Courtnee Coffman followed suite for the Grizzlies, with a swim of 51.71 in the 100 freestyle.

In the 200 breaststroke, August Hartzell picked up a gold medal, with her time of 2:25.88 for Franklin and her teammate Anna Perkins added a win in the 200 butterfly, who turned in a swim of 2:12.74. In the final event of the evening, Franklin took home the gold in the 400 freestyle relay, with the team of McCafferty, Jacqueline Richard, Brynna Sentel and Coffman turning in a time of 3:28.70.

On the men’s side, things got started in the 1650, with Rose-Hulman’s Shamus Sparling out swimming the competition to take the title with a swim of 16:49.36. James Hone got the Grizzlies back on top of the podium in the 200 backstroke, swimming a winning time of 1:51.39. The Fightin’ Engineers picked up another win in the 100 freestyle, with Jared Brown swimming a time of 45.77 to take first.

Dylan Harker picked up first by seven one-hundredths of a second in the 200 breaststroke to claim another first-place finish for the Grizzlies. Charlie Hall grabbed first in the 200 butterfly for Franklin, swimming a race of 1:52.73. In the finale on the men’s side, Rose-Hulman took the 400 freestyle relay, with Zachary Tate, Dutch Kipp, Brendan King and Jared Brown placing first with a swim of 3:04.02.

In the one-meter dive, Franklin’s Gauge Creech took the title, with a score of 516.55.