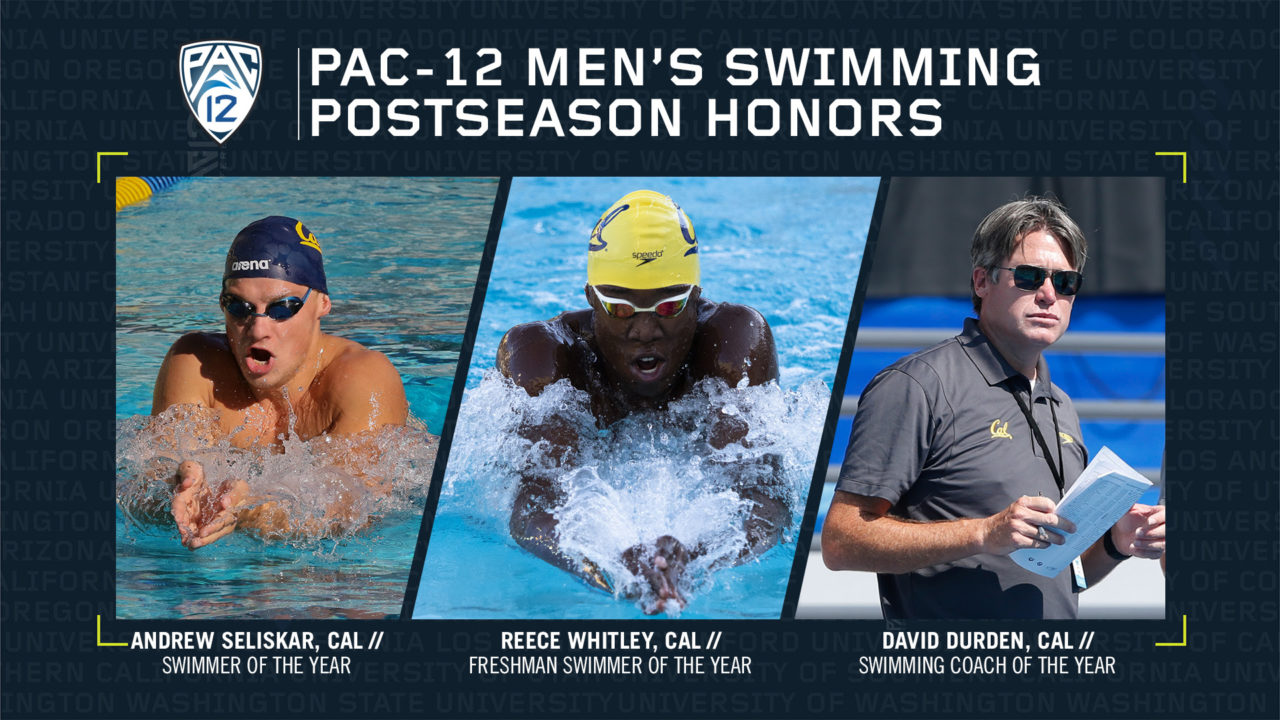 SWIMMER OF THE YEAR: Andrew Seliskar, Sr., California (McLean, Va.)
In the final postseason of his collegiate career, Seliskar earned his first three individual NCAA titles in the 200-yard individual medley, 200-yard freestyle and 200-yard breaststroke, setting new Pac-12 records in both the 200 IM (1:38.14) and 200 free (1:30.14). He became the first Golden Bear with three victories in one NCAA meet since Matt Biondi in 1987. In relays at NCAAs, Seliskar kicked off the 800 free relay team that broke a Pac-12 record (6:07.31) and anchored the winning 200 free relay that set the pool record (1:14.46) at the historic Lee and Joe Jamail Texas Swimming Center. Seliskar’s impressive performance led his team to an NCAA title and he was honored as the CSCAA Swimmer of the Year. At the Pac-12 Championships, he earned his second-straight and third-career Pac-12 Swimmer of the Meet honor. He now owns the record for most individual titles at the Pac-12 Championships with 11, claiming three titles at the Championships in the 200 IM and set new meet records in the 200 free and 200 breast. He swam a leg on the 800 free relay that set a Pac-12 record and won the 400 medley relay with his teammates. The senior studying environmental economics and policy is the 11th Bear to win the Pac-12 Swimmer of the Year award.

FRESHMAN SWIMMER OF THE YEAR: Reece Whitley, Fr., California (Lafayette Hill, Pa.)
In his first season as a Golden Bear, Whitley played an instrumental part in California’s national championship run. He swam a leg on the 200 and 400 medley relays that both placed second at the NCAAs. Individually, he earned first team All-American honors in the 100 and 200 breasts. The breaststroker also made an impression at his first Conference Championships, helping Cal to victories in 200 and 400 medley relays. He took second in the 100 and 200 breasts. In the 200 breast, Whitley placed right behind Swimmer of the Year Andrew Seliskar and both broke the previous Pac-12 Championships record of 1:51.30. The freshman interested in studying business administration is the first Bear to win the award since Seliskar in 2016 and the eighth all-time for the program.

SWIMMING COACH OF THE YEAR: David Durden, California
Head coach David Durden has fortified California as a national collegiate swimming powerhouse in his 12 years at the helm, earning his second-straight and eighth all-time Pac-12 Swimming Coach of the Year award. He was also named the CSCAA Coach of the Year, the fifth of his career and first since 2014. Four of California’s six national team titles have come under Durden (2011, 2012, 2014 and 2019) and the Golden Bears have placed among the top two at the NCAA meet each of the last 10 years. Durden claimed his fourth NCAA title in dominant fashion, as Cal’s point total (560) and margin of victory (85) were both the most in their history. In total, 12 Cal athletes accumulated 42 first team All-America honors for placing 1st-8th in individual and relay events. Seven of those athletes nabbed at least three All-America honors. Durden’s squad also dominated at the Pac-12 Championships, winning its second-straight and sixth overall league title with a 232-point margin of victory, the largest since 2007. In December of 2018, Durden was named the U.S. men’s swimming head coach for the 2020 Olympic Games in Tokyo, the eighth Cal coach to be selected for the role.

DIVER OF THE YEAR/FRESHMAN DIVER OF THE YEAR: Noah Vigran, Fr., Stanford (Cincinnati, Ohio)
In his first season, Vigran won both the Pac-12 Diver of the Year and Freshman Diver of the Year, the first Pac-12 diver to win both awards in their first season since Riley McCormick of Arizona State in 2010. He is the fifth Cardinal to win the Diver of the Year award and the first since Kristian Ipsen in 2015. Vigran’s breakout season was highlighted by a first team All-America finish in the 3-meter springboard (sixth place) and honorable mention in the platform (16th place) at the 2019 NCAA Championships. At the Pac-12 Championships, he earned second-place in the 1-meter (331.95), 3-meter (378.75) and the platform (312.55). He finished the season with top-six scores in the Conference in all three diving events. The two-time USA Diving Junior National finalist was also named the Pac-12 Diver of the Week on February 27.

DIVING COACH OF THE YEAR: Patrick Jeffrey, Stanford
In his fifth season at the helm of both the men’s and women’s diving programs at Stanford, Jeffrey earns his second-career Pac-12 Men’s Diving Coach of the Year award, previously winning in 2015. He mentored two freshman divers this year in Pac-12 Diver and Freshman Diver of the Year Vigran and Conor Casey. The rookie duo accumulated the most points of any other freshmen divers at the Pac-12 Championships. Jeffrey’s divers had podium finishes in all three events at the Conference Championships, including in the 3-meter which Casey won (382.40) and Vigran took second (378.75). Both divers qualified to compete at NCAAs and Vigran earned a first team All-America finish in the 3-meter (sixth place) and honorable mention in the platform (16th place) while Casey qualified for the 1-meter and 3-meter. On the women’s side, Jeffrey also mentored Carolina Sculti to a Pac-12 Women’s Diving Freshman of the Year honor. In addition to his continued success on the college scene, Jeffrey has been a regular in international competition. Jeffrey was Team USA’s head coach at the 2013 World University Games and has also been on staff at the 2009 World Championship, 2007 World Student Games, 2001 World Championship, 2000 Olympics and 1999 U.S. World Cup.