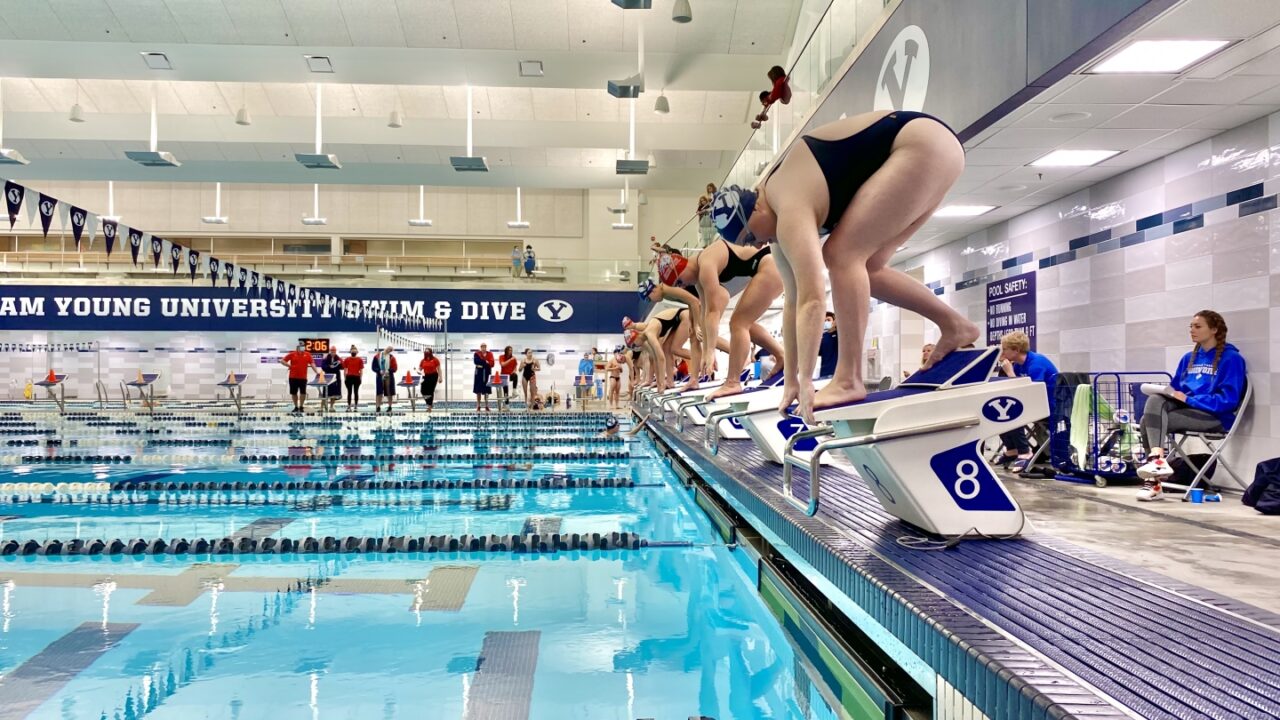 In a back-and-forth, non-scoring contest, the BYU Cougars were ultimately able to take down the Utah Utes on Friday afternoon. Stock photo via BYU Athletics

PROVO, Utah — In a back-and-forth, non-scoring contest, the BYU Cougars were ultimately able to take down the Utah Utes on Friday afternoon, winning the final meet of the day and taking seven of the 13 relay races.

After losing five of the first eight events, BYU went on to win three of the next four to knot things at six heading into the final event of the afternoon. Freshman Will Bonnett contributed to the team’s success along the way, swimming in the men’s 400-yard medley relay and helping post a 3:25.89.

The final race featured an annual crowd-favorite event and an opportunity for the divers from each team to participate in the relays. BYU divers Alexia Jackson, Chase Hindmarsh, Hailey Johnson and Cody Dreesen posted a 1:46.93 in the mixed 200 yard freestyle relay to bring home the victory for the Cougars.

BYU swim and dive will look to build upon a successful event against Utah as it prepares to travel to Colorado for the Intermountain Shootout Invitational on Sept. 30 and Oct. 1 at the El Pomar Natatorium.

PROVO, Utah – The University of Utah swimming and diving team collected six first-place finishes on Friday night while competing against the BYU Cougars in a relay meet at the Richards Building Pool.

“I’m really happy about the meet today,” said coach Jonas Persson. “We had great attitudes and competed hard. Our swimmers and divers are proud to be Utes and it really showed today. We have a few more weeks of hard training before our first conference meets, so today was great preparation for that.”

The night began with the mixed 200 free relay and the Utes captured the top three spots, led by the quartet of Finn O’Haimhirgin, JP Hynes, Maddie Woznick and Erin Palmer. Right behind them were Katie Hale, Reagan Cathcart, Davis Stachelek and Lucas Calderon and third place was occupied by Jaek Horner, Kayla Miller, Sofia Carlson and Parker McOmber.

Utah followed that up with another dominant showing, this one in the women’s 3×150 butterfly, where Summer Stanfield, Harper Lehman and Sydney Even landed atop the podium, just ahead of Sadie Edwards, Kim Lanaghen and Taylor Alicea-Jorgensen.

Two more first-place finishes by the Utes came in the men’s 3×150 backstroke and the women’s 3×150 breaststroke. McOmber, Andrei Ungur and Holden Ellsworth swam into the top spot in the former event, while the latter saw Charity Pittard, Krystal Lieu and Hilja Schimmel claim first.

The final Utah victories of the day came in the women’s 500 free relay and the women’s 400 medley relay. The free relay squad of Lily Milner, Woznick, Stanfield and Miller teamed up to best the field in their race and Miller and Stanfield later joined forced with Shimmel and Pittard to win the medley relay, where another Utah crew consisting of Milner, Palmer, Alyssa Watson and Krystal Lieu snagged second.

Next Up
Utah’s 2022-23 regular season will begin on Oct. 12, when they’ll face the California Golden Bears in Berkeley, Calif.