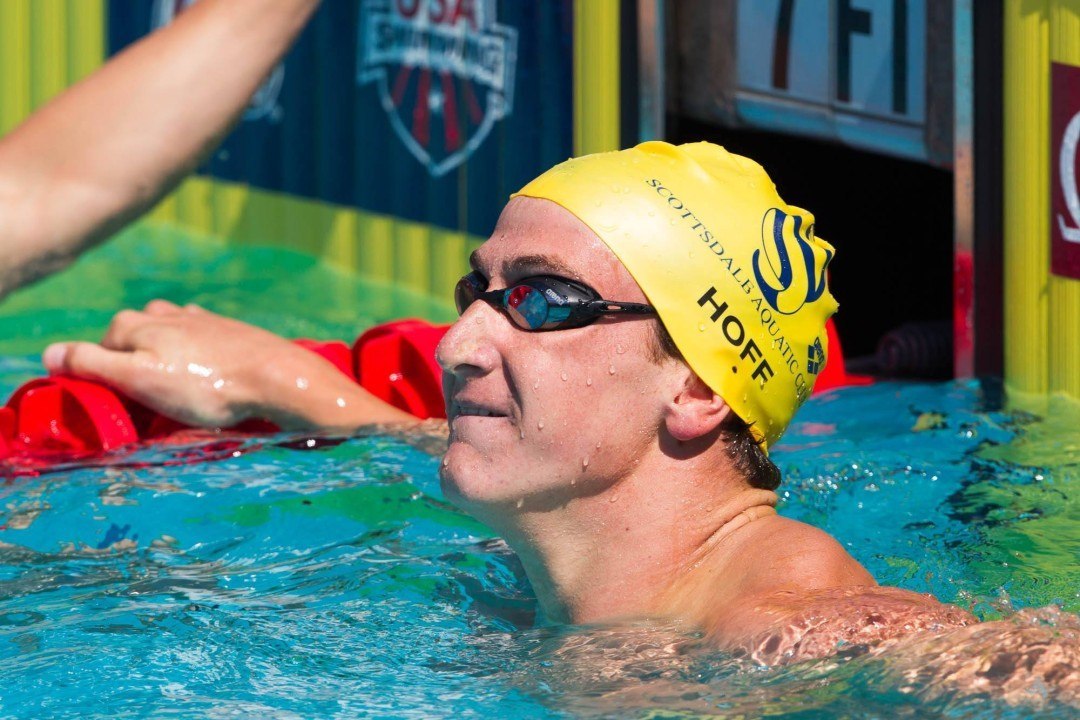 Chandler’s Mark Jurek and Chaparral’s Ryan Hoffer were the stars on the men’s side, while Chaparral’s Taylor Ruck and Arcadia’s Savanna Carlson each won two individual races for the girls.

In Division II, for the state’s smaller schools, Catalina Foothills won the boys title on double wins from Brooks Fail and Matt Lujan, while the girls of Campo Verde took the title with a deep group.

Check out our interviews with Ryan Hoffer, Matt Anderson and Hannah Holman from prelims here.

The boys meet saw 7 state records go down out of 12 events, including two apiece to Mark Jurek and Ryan Hoffer.

Jurek, a junior with Chandler High, rolled to a pair of state titles early on. He first won the 200 IM, going 1:47.03 to win by three seconds and take just over one off the state record. He would go on to win the 100 fly in 47.80, once again winning in a landslide and adding his name to the state record book.

One event after each of Jurek’s record, Chaparral sophomore Hoffer took the pool, keeping the meet on fire with state records of his own. First, Hoffer took .01 off his own 50 free mark while also breaking his own 15-16 National Age Group record with a time of 19.53. Hoffer would come back to win the 100 free in 43.20, breaking the state record by about a half second in the event. That’s just about a tenth off of Hoffer’s lifetime-best.

After Jurek’s 100 fly and Hoffer’s 100 free, the next event saw yet another state record go down. Ben Olszewski, a junior from Horizon High, went 4:21.48 to blow away the state 500 free mark by 6 seconds.

The other individual record went to Arcadia senior Matt Anderson in the 100 breast. Anderson, a Stanford commit, was 54.76 to win the race by nearly two seconds and break the state record by about seven tenths.

Keeping up the trend of records coming in bunches, the final state record came one event later, as Brophy Prep took down the state 400 free relay mark to seal their win. Thomas Ottman, Isaiah Williams, Grady Ottomeyer and Jack Blake combined to go 3:03.93, chopping a little more than a second off the record. That included a 44.55 split from Blake on the end. They won by over five seconds.

Brophy also won the 200 free relay, missing a state record by just a tenth in that event. Once again, Blake was the star, anchoring in 19.85. His teammates were DJ Brown, Ottomeyer and Sean Gage, and the team went 1:23.85.

Cactus Shadows High got an individual win from senior Connor Stirling. He beat out Blake for the 200 free title, going 1:37.54. Stirling would also take second to Hoffer in the 100 free with a 43.88.

Desert Vista’s Joshua Vedder won the other individual swimming event, going 50.70 in the 100 back. The 1-meter diving event went to Sunnyslopes’ Emmott Blitch, who scored 445.75 points.

Chaparral won the 200 medley relay to open the meet, touching out Mountain View by two tenths. Chaparral keyed on a huge 21.83 leadoff leg from Hoffer, and continued with Marcello Quarante, Niccolo Quarante and Sam Acheson. The team went 1:34.32.

Ruck was a part of two of those records. Individually, she took down the 200 free mark, going 1:46.76 to blow away the field and break the state record by three tenths. Ruck also won the 500 free in 4:52.11, though she couldn’t crack the state record book in that event.

Chaparrall took down state records in two of the three relays. Ruck swam both free relays and helped the 200 break a record. Coming off the 500 free, she anchored the winning 200 free relay, though her splits aren’t recorded on Meet Mobile results. She was joined by Gabriella Fagan, Emma Segneri and Olivia Wang to go 1:35.04, two tenths under the state record.

Pinnacle High took down the final state record, beating Chaparral in the 400 free relay. Though Ruck was charging on the anchor leg with a 49.21 split, Pinnacle anchor Victoria Toris was able to hold her off, going 51.02. Toris, who is committed to USC for next year, was joined by Julie Gibson, Hayley Hill and Sam Fazio on the state record-breaking relay, which went 3:26.86.

Fazio also won individually for Pinnacle. The senior took the 50 free, going 23.27 for the title with Toris third.

Arcadia sophomore Savanna Carlson doubled up on wins. She topped Toris to win the 100 free in 50.74, and that came on the heels of an earlier 200 IM win in which she went 2:02.07 to take home the title.

Second in that IM race was Desert Mountain’s Katie Shannahan, who would go on to win the 100 fly in a touchout. Shannahan was 54.99 to just beat out Chaparral’s Segneri.

Shadow Mountain senior Hannah Holman was the star individually in DII. She won twice, taking the 200 IM (2:02.00) and 100 breast (1:03.83). That 200 IM time was the fastest in either class, and the 100 breast was close to topping the DI champ. Holman is committed to the University of Tennessee.

Salpointe won a pair of relays (the 200 medley and 400 free) to earn a runner-up team finish, but couldn’t compete with the depth of Campo Verde, which won the meet while winning just one event. That one contest was 1-meter diving, where Baylee Stipp scored 444.70 points to take the state crown.