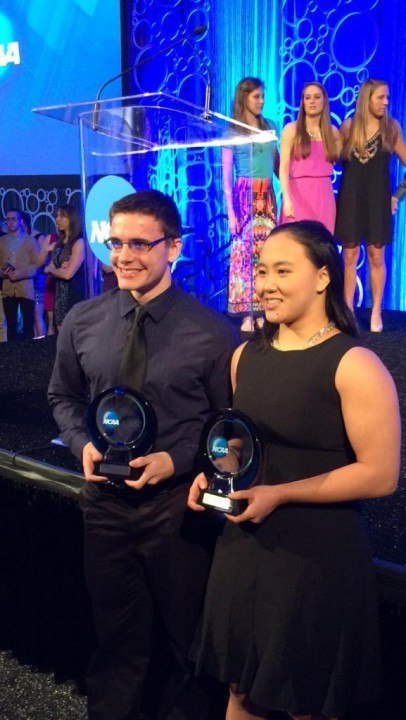 The Elite 89 Award is presented to the student-athlete with the highest cumulative GPA competing at the finals site for each of the NCAA’s championships. That’s 89 total recipients every year across each sport in all three divisions.

This year’s recipients for Division III men’s and women’s swimming are sophomore Brett Stoughton of Calvin College and junior Margaret Guo of MIT.

Stoughton, primarily a butterflier, won both the 100 and 200 butterfly at the MIAA Championships, and also placed 7th in the 100 backstroke individually. He also swam the fly legs of both of Calvin’s victorious medley relays, including a 48.92 in the 400 medley, over a full second faster than his individual 100 fly. Calvin’s only qualifying relay was the 400 medley relay, on which Stoughton is expected to swim the butterfly leg.

Guo is a butterflier and freestyler who is MIT’s fly leg on their medley relays. MIT qualified all five relays for NCAAs, and the junior might also swim in the 200 and/or 400 free relay this week.