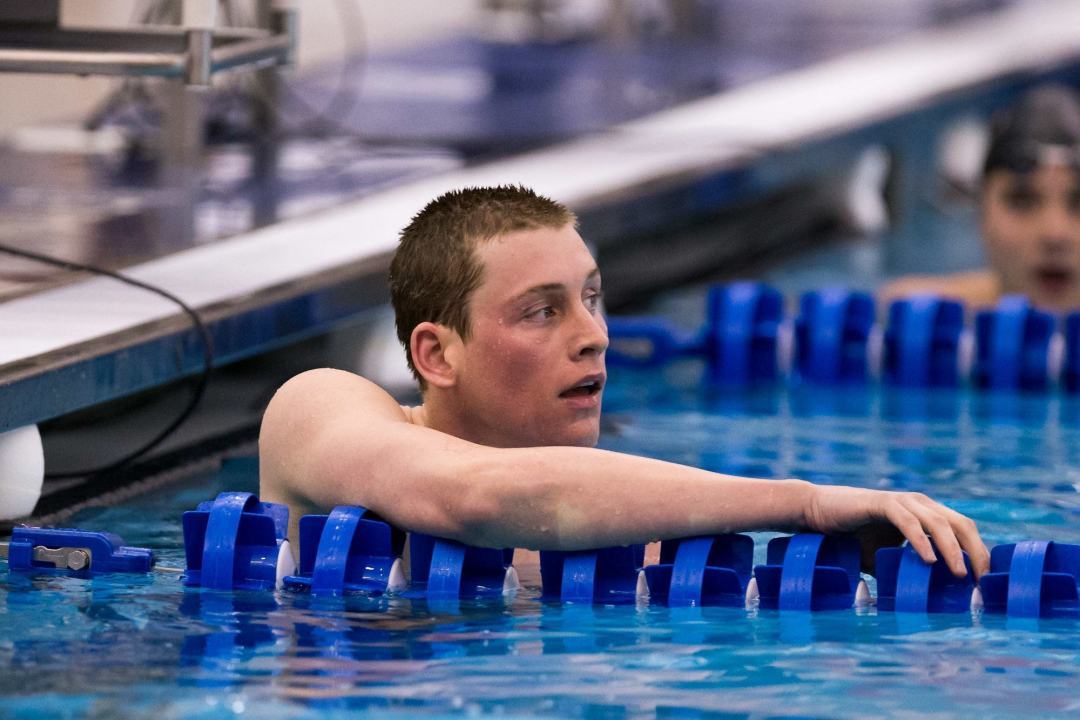 Yannick Kaeser was dominant across the two breaststroke wins in a Virginia home victory over Navy on Friday. Archive photo via Tim Binning/TheSwimPictures.com

The Virginia Cavaliers men, despite a tumultuous week that included suspensions to 5 of their best swimmers, came up with a strong performance on Friday night against Navy at home, winning in their first dual meet of the season. Navy moves to 2-2 after the 183-117 defeat at the hands of the Cavaliers.

The Virginians were boosted by a star-power performance from senior diver JB Kolod, who broke Virginia school records on both the 1-meter (390.83) and 3-meter (440.70) springboards. Kolod earned first-team All-America honors last year on the three meter springboard and held both of these school records coming into the meet.

Shifting the focus to the pool, sophomore Matt Lockman performed very well with the pressure of the Virginia sprint group suddenly on his shoulders. The team’s two best sprinters, Jake Pearce and Charlie Rommel, are among the five who will miss the semester.

Duvall would later in the meet take a much tighter 500 free with a 4:33.39, just beating-out Virginia’s Rodney Fentress (4:33.52). Fentress controlled the pace early in this race, but Duvall started fighting back about halfway, where his splits overtook Fentress.

Fentress still held onto the lead, though, until the final 50 yards, where Duvall split a 25.26 to jump into the ultimate, and final, lead.

Many young swimmers came up big for UVA in this meet. Sophomore Zach Bunner won the men’s 100 back in 49.91, with freshman Henrik Pohlmann 2nd in 50.59. That’s a great start for the season of Bunner, who didn’t race until the sprint semester last season.

The 200 backstroke win went to 17-year old Virginia freshman Brendan Casey in 1:48.98. That’s already just about a second off of his best time in the event, Best known as a distance and open water swimmer, the backstrokes could be an interesting, and valuable, wrinkle for Casey this year at Virginia.

Kaeser will be an important part of holding this team together through the fall semester. Of the 8 swimmers invited to NCAA’s for Virginia last year, he’s the only one who swam at this meet on Friday, and he swam very well with times right around, or better, than he was early last season.

Navy took another discipline-sweep in the butterflies, where Jonathan Debaugh swam 50.13 and 1:49.42 for the double. Come the spring semester, Kyle Dudzinski and David Ingraham will lead the way for Virginia in that event, but at this meet it was another young swimmer sophomore John Denning who paced the Cavaliers. He took 2nd in both races with times of 50.78 and 1:49.74.

Navy got another win, in the 200 IM, from standout freshman Young Tae Seo. Seo, a former Southern California standout, prepped for a year at the Kiski School before enrolling in the Naval Academy, but the wait was worth it for the Midshipmen: he won the 200 IM in 1:52.29, holding off Virginia’s Quinn (1:52.44) thanks to a great breaststroke leg.

The Virginia men will next be in action on November 7th and 8th with a two-day tri meet against Michigan and Penn State at Penn State. Navy next races Patriot League opponents American University on November 8th.