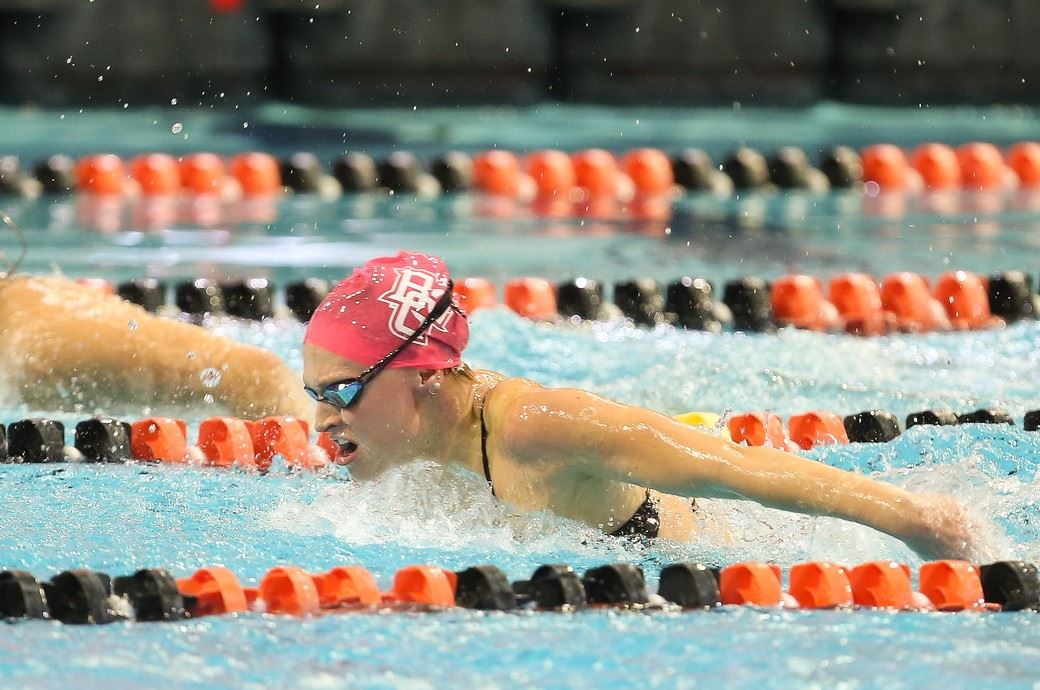 Divers Talisa Lemke and Kylie Mosset started the night strong for the Falcons, placing in the top two spots of the 1 meter dive. BGSU’s momentum carried into the first swimming event, with the 200-yard medley relay team of Daisy Platts, Taylor Harris, Sarah Hennings, and Anna Eriksson winning in 1:44.01. After Kellie House placed second in the 1000-yard freestyle, the Orange and Brown saw back-to-back victories from Maddy Andrews (200-yard freestyle) and Daisy Platts (100-yard backstroke). Platts finished in 55.40 seconds, the seventh-best time in school history. Anna Eriksson concluded the first half of swimming events with a victory in the 50-yard freestyle.

The second diving event featured another win by Talisa Lemke. The senior scored 326.02 in the 3 meter dive, with Kylie Mosset adding a third place finish with a score of 241.20. The Falcons had a strong start when swimming events resumed, with Ashleigh Franks, Gillian Boal, and Julianna Petrak taking the second through fourth spots of the 100-yard freestyle. Soon after, Daisy Platts set another 7th best mark in school history, winning the 200-yard backstroke in 1:59.42. Lauren Sullivan backed Platts in that race with a time of 2:04.41. In the 500-yard freestyle, BGSU took the second through fourth spots again. Maddy Andrews, Kellie House, and Shaunna Jones all posted scoring times for the Orange and Brown.

The final event before a 15-minute break featured a historic performance from junior Sarah Hennings. Hennings won the 100-yard butterfly in 56.03 seconds, the 10th fastest time in school history. Anna Eriksson followed Hennings with a runner-up time of 56.83. After the break, Daisy Platts won the 200-yard individual medley, her third victory of the day. Platts has won all six individual events she has competed in this season. The Falcons clinched their victory with a win in the 200-yard freestyle relay. The team of Gillian Boal, Lauren Sullivan, Noelle Lavigne, and Anna Eriksson finished in 1:36.49.

Coach’s Quote
“I’m very happy with the way the girls performed tonight. I think practices have been going really well and they’ve been training super-duper hard and it shows in their confidence and racing ability. We saw some good things and we saw some things we need to work on, turns and underwater stuff. Overall, I’m happy with the spirit and confidence they have. I look forward to our meet against Marshall and hopefully we can work really hard the next couple weeks and do well there too. Our goal is to see how good of a team we can be by MACs in February. It’s a long way away but they’re doing an incredible job of working hard and trusting each other and giving everything they have to the team.”

Up Next
The Falcons will compete at home again when they host non-conference opponent Marshall. The meet will begin at 1:00 p.m. in Cooper Pool on Saturday, Nov. 9. It will be Heroes Day and admission is free!

Senior Emilia Lahtinen (Ylojarvi, Finland) took first-place in the 100-yard Breaststroke, with a time of 1:05.68. Junior Samantha Glass (Villa Hills, Ky.) contributed nine points for Ohio’s cause with a first-place finish in the 200-yard Butterfly, clocking in at 2:06.77.

Freshman Emma Fortman (Madeira, Ohio) won her first MAC race of her collegiate career, coming in first in the 100-yard Freestyle with a time of 52.41.

The Bobcats take a weekend off from competition before coming home to the OUAC to take on Akron on Saturday, Nov. 9th. The meet is scheduled to begin at 1 p.m.