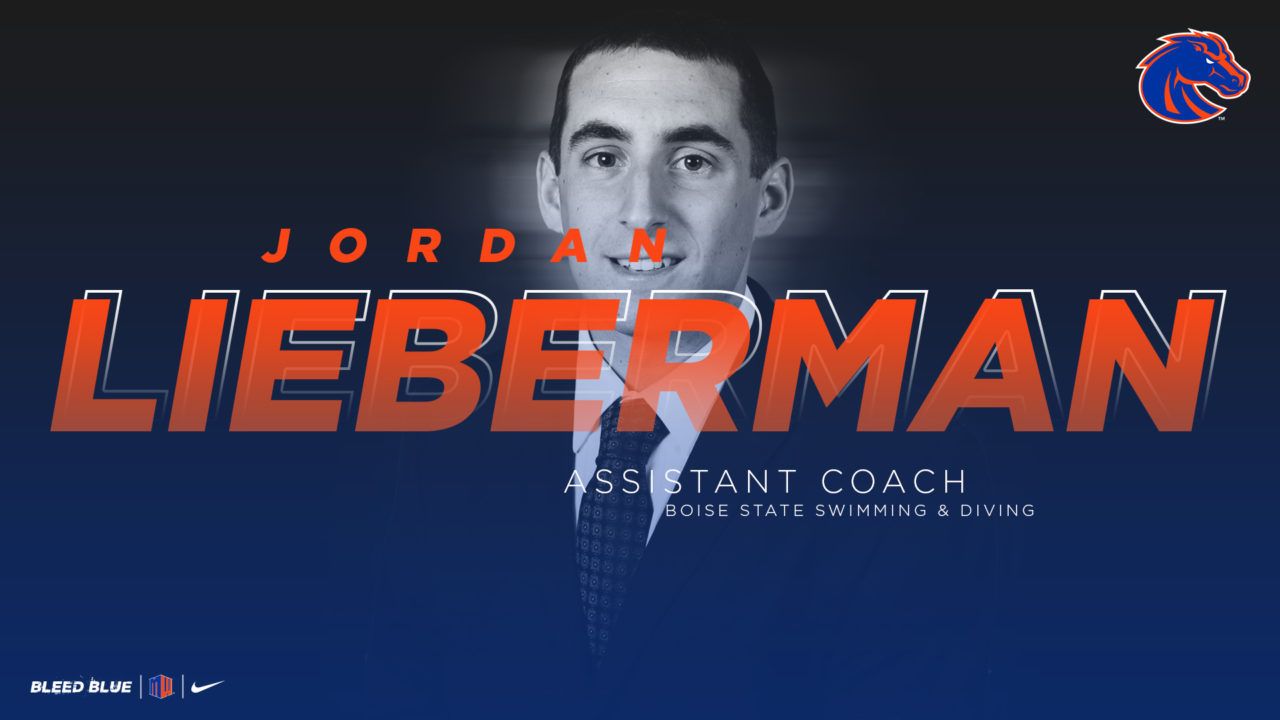 Boise State's new head swimming coach Christine Mabile has rounded out her staff with the addition of Jordan Lieberman as the assistant swim coach. Current photo via Boise State Athletics

BOISE, Idaho – Boise State’s new head swimming coach Christine Mabile has rounded out her staff with the addition of Jordan Lieberman as the assistant swim coach. The addition of Lieberman along with head diving coach Brandon Blaisdell completes Mabile’s staff as she enters her first season with the Broncos.

“I am excited to welcome Jordan to the Bronco Family!” said Mabile. “He is passionate and knowledgeable in our sport and will make a great addition to our team.”

Most recently, he was an assistant coach for the Cornell men’s swimming and diving program for the last two years where he played an instrumental role in the program’s success in his first season.

Lieberman helped the Big Red to a fifth-place finish at the Ivy League championship in 2017, tied for the program’s best finish since 2009. In his two seasons at Cornell, 54 swims joined the school’s all-time top 10 charts, rewriting four records in the process. In addition, Alex Evdokimov won the 100 and 200 breast double at the conference meet in both seasons and earned a total of four All-America honors along the way with Lieberman assisting in his training.

Lieberman spent the 2015-16 campaign as a volunteer assistant coach for the Texas A&M women, helping the Aggies win the Southeastern Conference title and place fourth at the NCAA Championships. While assisting the Aggies program, Lieberman worked with three 2016 Olympians. The team produced 12 individual and three relay first-team All-America performances. The team’s 13 NCAA qualifiers tied for most in the nation.

While coaching at Texas A&M, Lieberman also assisted with the Aggie Swim Club. He worked in all aspects of training for a 25 swimmer senior group, including water and dryland training, technique and race strategy feedback. During his time, the club produced a pair of All-America performers and its first-ever Olympic Trials qualifier.

He began his collegiate coaching career as an assistant coach at Occidental College for one season in 2014-15, helping produce two All-America performances. His swimmers broke two conference and eight school records, and had six all-conference swims.

Lieberman has served as a coach at various camps and clinics, including two summers as a visiting coach at Stanford.

Lieberman graduated from Claremont McKenna in 2013 with a degree in neuroscience and earned his Master’s in urban education in 2015 from Loyola Marymount University.

Would love to see Boise State open a men’s team to go with an improving women’s program.