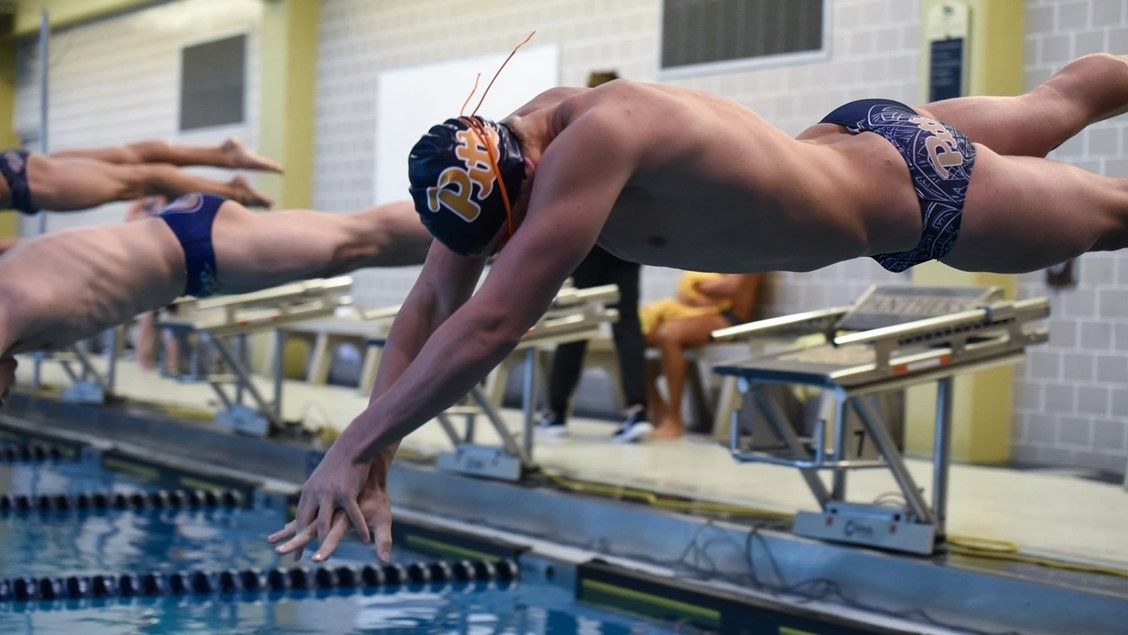 Blaise Vera continued his early season success with some of the top times in the nation as the Pittsburgh men and women defeated Michigan State Friday. Archive photo via courtesy Pittsburgh Swimming

Michigan State vs. University of Pittsburgh

The Panthers soundly defeated the Spartans, 186 to 114, winning all except three events.

The two breaststroke races were the only individual events the Spartans were able to win, with Erin Szara taking the 100 breast in 1:02.86 and Kasey Venn taking the 200 breast in 2:18.05.

The score was a little closer on the men’s side, as Pitt won 172 to 126, but it was also a little more exciting, as we saw some of the top times in the nation so far this season.

Those times were courtesy of Pitt’s Blaise Vera. The junior start the day with a 20.69 fly split on Pitt’s 200 medley relay, nearly outpacing the 20.45 anchor leg the Panthers got from Ellis Cannon, en route to a 1:29.72 victory.

Vera then swept the sprint freestyles, taking the 50 free in 19.98 and the 100 free in 44.10. Vera had already dipped under 20.0 this season with a 19.93 at the TYR Fall Classic; that was the second-fastest time in the nation at that point, and is now the 3rd-fastest pending full results this weekend’s competitions.

He then ripped a 43.75 leading off Pitt’s 400 relay at the end of the session. While that time wasn’t enough to catapult a the Panthers to victory (MSU won 3:02.84 to 3:04.47), it was the fastest time in the NCAA so far this season, at least until Alec Connolly’s 43.55 Saturday at the Tennessee-Virginia dual.

“I thought we swam well and had some really good racing. They’ve got a good team. This is the first half of our weekend so we’ll see how we respond tomorrow with a Big Ten meet,” said head coach Matt Gianiodis. “I thought Michael Schwers had a good win in the fly. Our divers dove pretty well against a good team. Our medley relay on the women’s side was really kind of shocking and exciting. All around we had a good racing and hopefully can do it again tomorrow.”

Two Spartans claimed their third consecutive first-place finishes in their respective events. In the 100 butterfly was senior Michael Schwers with a time of 49.38 and in the 100 breaststroke was junior Erin Szara(1:02.86).

In the final event of the evening, the men’s 400 Free Relay, swam by Farley, Schwers, Payton Woods and Nehemiah Mork, finished first (3:02.78).

In men’s diving, sophomore Jakob Heberling took first place in the 3-meter with a score of 311.92.

In women’s diving, with a score of 295.95, junior Amanda Ling finished first in the 1-meter.

The Spartan women are back home tomorrow to compete against Illinois at 12 p.m., and to celebrate the 50 years of women’s swimming and diving.

EAST LANSING, Mich.—In what was a memorable day of athletic success at the University of Pittsburgh, the Pitt swimming & diving teams added to the win columns with a convincing sweep of Michigan State in an ACC-Big Ten dual meet at McCaffree Pool.

In the first traditional dual meet of the 2019-20 season for the Panthers, the Pitt women’s team cruised to a 186-114 victory over Michigan State, while the Pitt men also recorded a 172-126 triumph against the Spartans.

“It was a really good meet. I’m proud of the way we competed,” said Pitt’s fourth-year head coach John Hargis after the meet. “We saw some really strong swims. Daisy Anderson‘s 400 IM was definitely a highlight win for us. And it was great to see Cooper van der Laan make his debut; his 200 Breast was certainly impressive. Overall, we won the majority of the events and made it a great meet. I’m proud of the efforts of the entire team after a long bus ride up to Michigan.”

“We have some good young athletes who are really starting to figure things out,” Hargis added. “For instance, Alyssa Conley had the meet of her life. It’s really fun to watch when athletes develop and improve and perform at a high level, and we’re seeing more and more of that throughout our team.”

Winning multiple events for Hargis’ squad were seniors Valerie Daigneaultand Sarah Giamber on the women’s side and Eben Vorster, Blaise Veraand Cooper van der Laan for the men. Australian native van der Laan, who is also eligible to represent the Netherlands, made his collegiate debut in style by sweeping the breaststroke events by large margins, posting some of the top times in the nation.

Pitt swimming & diving will continue training until its next dual meet, which will be back at Trees Pool on the weekend of Nov. 8-9 when the Panthers welcome ACC rival Notre Dame to Pittsburgh.