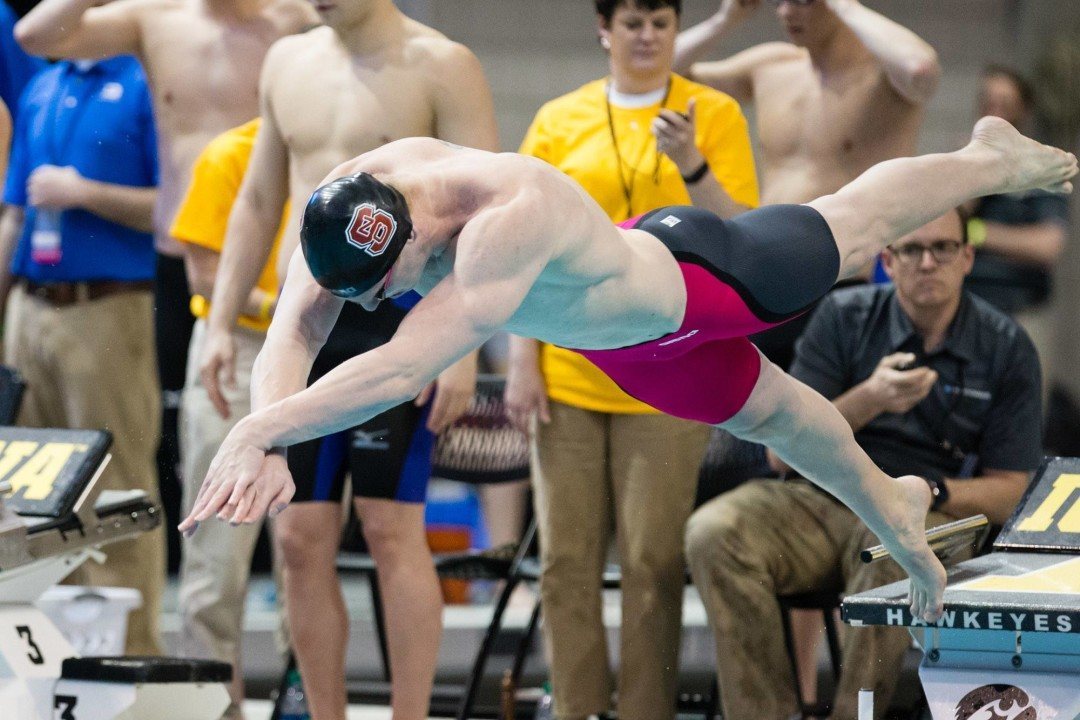 Bilis, who finished top 3 at NCAAs in both the 50 and 100 frees last year, was on fire in the sprints, as he usually is early in the season. Bilis won the 50 free by a crazy margin, going 19.83 – nearly half a second up on the rest of the field.

That time sits #2 in the NCAA this season behind defending national champ Caeleb Dressel of Florida. Bilis passes 2014 NCAA Kristian Gkolomeev in the rankings.

In the distance races, Danish sophomore Anton Ipsen hit two high-ranking times while winning handily. He opened the meet with a 9:00.23 in the 1000 free. The two margins that stand out there: he won by 12 seconds and is #1 in the NCAA by 3.

Ipsen was also 4:23.40 to win the 500, the second-best swim in the nation so far behind reigning NCAA champ Clark Smith of Texas.

NC State swept all but two of the men’s swimming events against a solid Florida State squad, showing off the well-rounded roster that brought them an ACC title last year.

Second in that 200 back was Florida State’s Connor Kalisz, who was a lifetime-best 1:45.08 for the Seminoles.

The NC State women maintained their momentum after big wins against USC and Hawaii last week. The Wolfpack lost just a single event in a throttling of their ACC rivals.

Reigning ACC sprint champ Riki Bonnema doubled in the 50 and 100 frees for the Pack in suffocating swims. Her 22.62 crushed the 50 free field by seven tenths of a second, and sits #4 in the NCAA this season.

Though the 200-99 final score was rough on the visiting FSU Seminoles, Florida State had a big bright spot in freshman Megan Brown, who took the team’s lone win. Brown blew out the 200 fly field with a 2:00.58, winning by two full seconds. She was also the closest challenger to Zevnik in that 200 IM, taking second to close the meet.

Impressive October swimming for NCState – if they can keep 5 relays LEGAL at NCAAs, they should be top-5, and could possibly crash the top 3.

Impressive times all around. Stuart’s 2 back time is the fastest. They are no longer just a sprint program… I hope they can breakthrough the top 5 this year. It would be great for the ACC