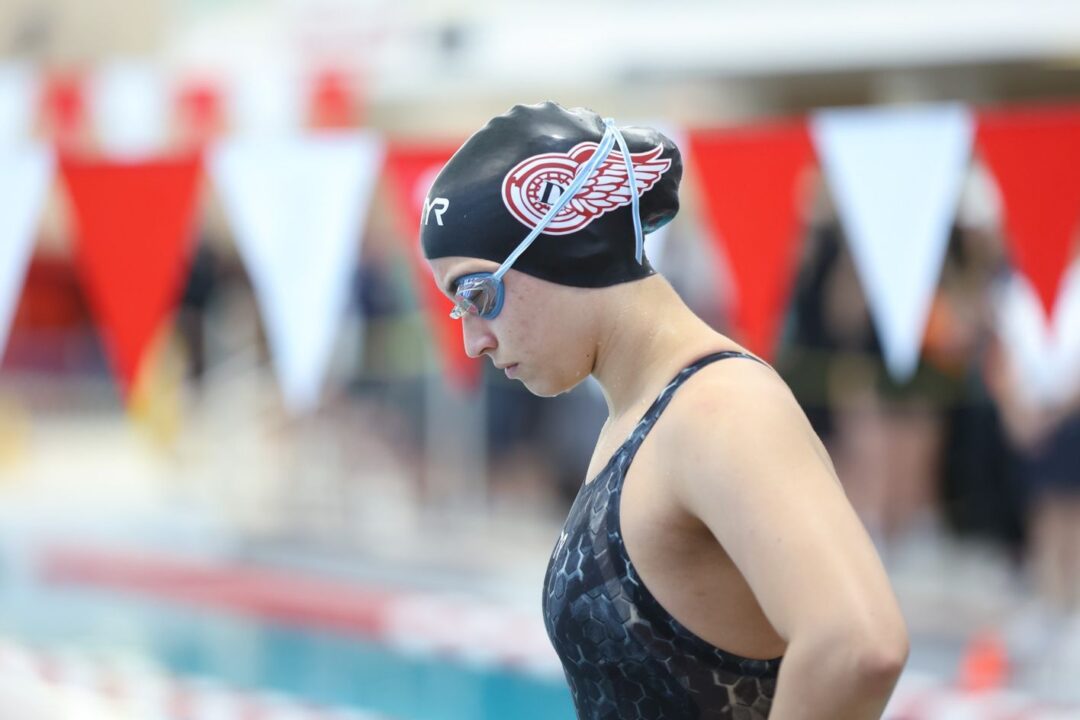 The Denison women scored 665 points on Thursday, giving them an 81-point advantage over second-place and NCAA Division I Eastern Michigan University (584). Current photo via Brandon Morgan

GRANVILLE, Ohio (December 1, 2022) – Denison University’s No. 5 nationally-ranked women’s swimming and diving team is in the lead after the first day of the Fourth Annual Denison Invitational. The Big Red totaled 665 points on Thursday, giving them an 81-point advantage over second-place and NCAA Division I Eastern Michigan University with 584 points. No. 2 nationally-ranked Emory University is third with 519 points, followed by No. 6 Johns Hopkins University (315) and No. 20 Washington University-St. Louis (162).

Competing against some of the top teams in NCAA Division III this weekend, along with a strong team from Eastern Michigan, the Big Red opened the competition with 13 NCAA Division III national cut times during the first round of finals.

For the second year in a row, sophomore Taryn Wisner and junior Tara Witkowski both earned an NCAA Division III National “B” cut in the 500 freestyle while junior Esme Wright did so in the 200 IM and junior Natalie English did it in the 50 freestyle.

The 3-meter diving preliminaries and finals took place in the afternoon, and sophomore Kerstyn Johnson (259.65), junior Maggie Seftenberg (248.75) and freshman Anya Ferner (212.45) each qualified for the finals before finishing in order between sixth and eighth place. Eastern Michigan led the Big Red 217-97 after the 3-meter dive kicked off the scoring for the meet.

Then in the first swimming final of the invitational, Denison’s A team of English, sophomore Grace Kadlecik, freshman Phoebe Ferguson and senior Tara Culibrk earned an NCAA Division III National “B” cut while finishing in second place in the 200 freestyle relay with a time of 1:32.31. In addition, senior Lauren Young, sophomore Amber Croonquist, sophomore Maja Palmroos and Wright also earned a National “B” cut and finished in fifth place with a time of 1:34.57. That allowed the Big Red to pull to within 275-159 of EMU in the standings while Emory entered the standings in third place with 70 points, followed by Johns Hopkins with 60 and WashU with 50.

Then in the first individual final of the meet, the 500 freestyle, Denison earned three National “B” cuts as freshman Quinn Brown finished third with a time of 4:53.92 while Witkowski (4:56.45) was right behind her in fourth place and Wisner (5:00.28) was sixth. That allowed Denison to continue to close the gap on EMU (383-302) while Emory remained in third place with 161 points.

The 400 medley relay closed out the night’s finals as Denison’s A team of sophomore Claire Moody, freshman Drue Thielking, Ferguson and Culibrk finished third and earned a National “B” cut with a time of 3:47.17. Right behind them in fourth place and also with a National “B” cut was sophomore Sophie Kannee, Crane, Palmroos and English (3:47.71).

Denison returns to the Trumbull Aquatics Center on Friday, December 2, for preliminaries at 10 a.m. followed by finals at 6 p.m.

The Emory University swimming and diving teams returned to competition for the final time this semester with the Denison Invitational in Granville, Ohio.

In the first opportunity to go all out for speed this season, the Eagles showcased numerous fast times on Thursday, leading to a combined seven event wins, 24 NCAA B Cuts and two pool records. Through day one of competition, the Emory men pace the four-team field with 565 points while the women stand in third place with 519 points out of five teams.

The Eagles displayed their winning ways on the men’s side with Emory swimmers taking first in four of the five events contested.

The finals session got underway with seniors Colin LaFave, Pat Pema, junior Nicholas Goudie and freshman Caden Bjornstad teaming for a win in the 200 Freestyle Relay with a winning mark of 1:20.33. Pema continued the wins as he took first in the 500 Freestyle, turning in a personal-best 4:23.81. His time represented a pool record and was the third-fastest time in team history.

LaFave edged out Goudie in the 50 Freestyle as the sprinters finished 1-2 in the event. LaFave captured the win with a 20.10 with Goudie finishing .25 seconds behind. The night concluded for the men with the 400 Medley Relay as both the Emory A and B teams finished in the top two positions. LaFave, Goudie, graduate student Jason Hamilton and sophomore Jeff Echols touched first at 3:13.48, establishing a new pool record, while Pema, senior Ryan Soh, junior Jake Meyer and sophomore Dylan Yin took second with a time of 3:15.09.

On the women’s side of the competition, the Eagles earned first place finishes in three of the five events on the evening including a sweep of the relay events.

Graduate student Taylor Leone out-touched senior Caroline Maki by a fingernail in the 50 Freestyle for the team’s lone individual win, with Leone besting Maki by .01 seconds in the photo finish. Leone posted a winning time of 22.99 which followed her 22.93 prelim time that paced the field.

In the 200 Freestyle Relay, Leone and Maki teamed with junior Megan Jungers and freshman Penny Celtnieks for a winning time of 1:31.81 and in the 400 Medley Relay, Jungers, Leone, Maki and senior Anna Glowniak blitzed past the remaining field, winning by over five seconds at 3:41.48.

The men secured 15 top-10 finishes on Thursday and has 12 NCAA qualifying marks. For the women, the team saw 10 top-10 swims to go along with 12 NCAA B Cuts.

The Denison Invitational continues on Friday with prelims starting at 10:00 AM with the finals session to follow at 6:00 PM.

After a stellar midseason meet, there are rumors that Pat Pema will be taking his talents to SMU following this season.