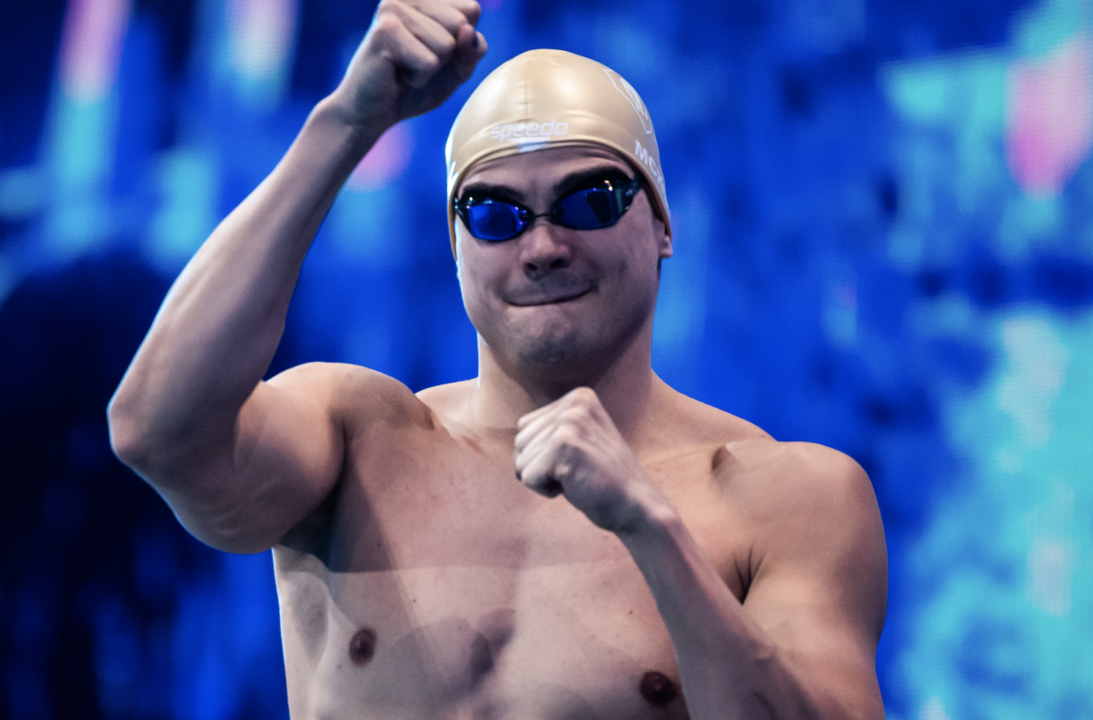 Anton McKee has been named Male Swimmer of the Year in his native nation of Iceland. Read more in this week's edition of Beyond the Lane Lines. Archive photo via Mike Lewis/Ola Vista Photography

Retired Olympic swimmer Franziska van Almsick has been awarded the title ‘Best of the Best’ among Berlin’s athletes since 1979, as voted by sports fans within her home nation. Fans’ votes counted 50% and were combined with an expert panel to determine the ultimate winner.

A 10-time Olympic medalist across 4 Olympic Games (1992-2004), van Almsick also raked in 22 gold medals throughout her European Championships career. The now-42-year-old was named World Sportswoman of the Year in 1993.

Van Almsick said of her recognition, “Thanks a lot. This is a great honor for me. Berlin is my great love – and that will never change. I have Berlin in my heart – and I am all the more proud that I was able to receive this Berlin bear here in Heidelberg. Because I know that the Berliners haven’t forgotten me.”

Two-time Olympic champion Britta Steffen was also among the short-listed athletes for the prestigious honor, ultimately finishing 4th in the voting.

Spendolini-Siriex, who is just 16 years of age, earned her first senior British title in the women’s 10m platform at the British National Diving Championships this year. She also took home gold in the same event while competing at the FINA Divin Grand Prix in Rostock, Germany.

On winning the award, the teenager said, “It feels amazing, I feel over the moon.

“I am going so far in my sport and I enjoy it so much because my dream is the Olympics and I know that I can get there if I carry on with what I’m doing. All the hours, all the tears, all the ups and the downs are really worth it.”

“Bernd Berkhahn has many reasons for which we award trainers of the year,” explains jury chair Uschi Schmitz. “He has achieved great success in open water and as the DSV team leader, is well on the way with his colleagues to transfer this to the pool and the other distances. His work and his skills as a trainer and psychologist convinced the jury throughout. ”

Berkhahn has two-time 2019 World Champion Florian Wellbrock in his stable, along with 1500m freestyle silver medalist from Gwangju Sarah Kohler.

Based on a range of criteria including FINA points across short course and long course competitions, success at the Icelandic Championships, as well as records broken over the course of the year, Anton McKee has been named Iceland’s Male Swimmer of the Year.

This marks McKee’s 3rd consecutive Swimmer of the Year honor, as the 27-year-old produced some big-time results over the course of this year. He participated in season 2 of the International Swimming League as a member of the Toronto Titans, taking down the national record in the 200m breast, while also nailing a new national standard and Nordic record in the 100m breast.

The Female Swimmer of the Year was granted to 20-year-old Snæfríður Sól Jórunnardóttir. Jórunnardóttir trains in Denmark and she recently produced a new national record in the women’s SCM 200 free – 1:56.51.

Condolences to Anton. Per his FB page, his father passed away “after a heroic battle with ALS”. Thoughts and prayers rom the swim community!