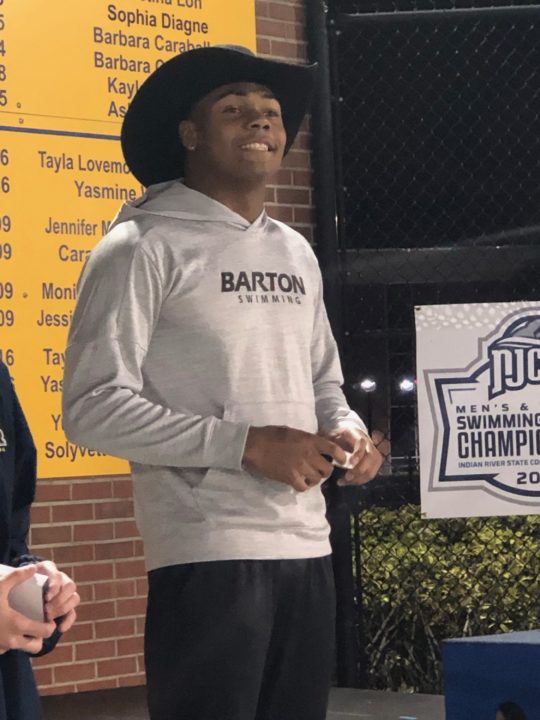 Barton is a member of the NJCAA, where student-athletes typically compete for 2 seasons before transferring to 4-year institutions. McClerkin will have 2 years of eligibility remaining at Lindenwood.

“I am thankful for the Barton Community College family and Harris County Aquatics Program for getting me to this point,” McClerkin said of his time spent in Kansas and Texas. “I’m looking forward to joining coach Jonathan Reedner and the Lindenwood University Lions men’s team.”

At the 2020 NJCAA Swimming & Diving Championships, McClerkin swam multiple races, which included anchoring Barton’s National Championship winning 200 medley relay in a closing split of 20.37. He entered the water with a half-second deficit to Southwest Oregon’s Emerson Zaplatar and about three-tenths behind Iowa Central’s Vincent Fletcher. A clutch swim that was almost 8-tenths of a second faster than the 21.09 he swam for 5th in the individual 50 free ran both down to give his team the win in a race that was separated by just .07 seconds at the final touch.

McClerkin’s biggest progress in the pool at Barton came in the 50 free, where he came out of high school with a best of 21.51.

The team was able to cobble together enough other performers to finis 5th as a team in the 200 free relay. That relay had four underclassmen, though McClerkin’s anchor from the NJCAA Championships would have been faster than one leg of Lindenwood’s top 200 free relay last season.

McClerkin trained with HCAP and attended Lamar High School. In 2015, he was selected to attend the USA Swimming National Diversity & Inclusion Select Camp.