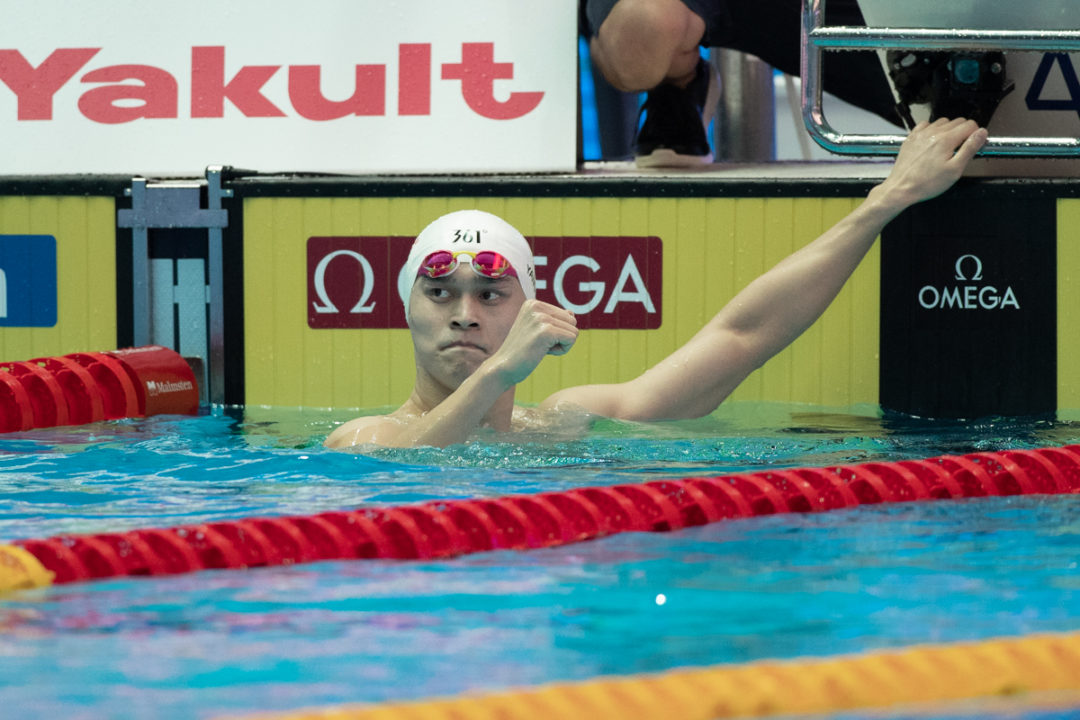 Multi-Olympic gold medalist Sun Yang may be serving a suspension for doping but the man is still very much in the public eye within his nation of China. Archive photo via “Rafael/Domeyko Photography”

Multi-Olympic gold medalist Sun Yang may be serving a suspension for doping but the man is still very much in the public eye within his native nation of China.

Sun, who is currently unable to compete until May of 2024, recently was a one-man spokesman show on Douyin (Chinese TikTok) touting cosmetics and skincare.

The 30-year-old freestyle ace appeared in a series of infomercials of sorts on Friday and Saturday, attracting millions of viewers. Spanning a total of 5 hours, Sun’s presentations of products from brands Estee Lauder, SK-II and others reportedly brought in over $4 million in sales.

For his time in the beauty products spotlight, Sun reportedly brought home a paycheck over $500,000 USD, according to China’s Global Times.

Sun will be 32 years of age when Paris rolls around and, as we reported, has told state-run Chinese online news source The Paper that he intends on competing.

“Actually my body is in great physical condition,” Sun said. “Difficulties will only help me grow and make me stronger.” He also said, “I’ll definitely stick with it.”

In addition to acquiring just short of a dozen World Championships titles, Sun has amassed multiple Olympic medals, including 400m free and 1500m free gold, along with 200m free silver from the 2012 Olympic Games. There in London, he became China’s first-ever swimming male Olympic gold medalist.

Sun isn’t the only Asian to have ties to the skincare realm, as Singaporean Olympic champion from Rio, Joseph Schooling, launched his own line of products called JS Orphic in 2019.

Time and time again, Sunny boy just keeps showing us that he’s got no couth…dude’s an eye sore.

Will 500k be enough to get an orthodontist in China?

Ooooh- I hope he was smashing vials of eye serum in the infomercials!

Unfortunately the ones you ordered for your crows feet were looted at the LA train depot.

Have you thought of a botulism injection ?

This is good news. BTW what happened after the ‘ Sun spied swimming in a pool ‘investigation ?

This is just Wada’s harassment of Sun Yang. You don’t know the case at all. DCO was a spy who was bought by the sponsor of the Chinese national team to frame Sun Yang from the beginning. Sun Yang’s drug test was a conspiracy. Wada helped DCO because they want cover up their problem. In fact, the real owner of DCO is the sponsor of the Chinese national team.

Goat! The Alpha Sigma Chinese Male was displaying dominance with his gold medal looking down while Duncan Scott(beta male), was slouched head down (scared position). Him winning the gold medal and Scott (beta) being a sore loser not wanting to take pictures with him just further proves his dominance during the moment.

Kim Kardashian gets $500K-1MM for a sponsored Instagram post, so the dollar amount doesn’t seem excessive for a star of his magnitude. And Sun comes from a country where the media is so tightly controlled & censored that most Chinese citizens probably believe he is an innocent victim of a Western conspiracy to defame him.

I think the guy’s a drug cheat, for whom I have zero respect, but he does have a basic human right to be able to earn a living. If Chinese companies want to hire him to endorse their products, more power to him.

Bro, all elite athletes are juiced. Whether you’re from the US, central Europe, China or Africa.

You don’t achieve success with eating rice, beef and broccoli.

Maybe that’s true where you’re from.

I don’t think it’s all, but I assume it’s a majority. Also don’t care.

This line of reasoning always annoys me. Many athletes may juice, likely those that are in high revenue & minimally tested sports like football. Not nearly all elite swimmers are juiced, some may be, some definitely push the boundaries of legal amounts of caffeine, supplements, inhalers etc. But absolutely not all elite athletes are juiced.

I would say that elite swimmers have a ton of incentive to dope. The difference in earning power between an Olympic finalist and medalist is significant, same as the difference between bronze and gold. I don’t think the number of dopers at any international meet is under 50%. It *might* be under 75%, but either way I don’t think “all” is too much of an exaggeration.

1
-1
Reply
Margalis-nator
Reply to  How on earth you swim 17.6 and win by a bodylength

It’s the subtle racism for me…