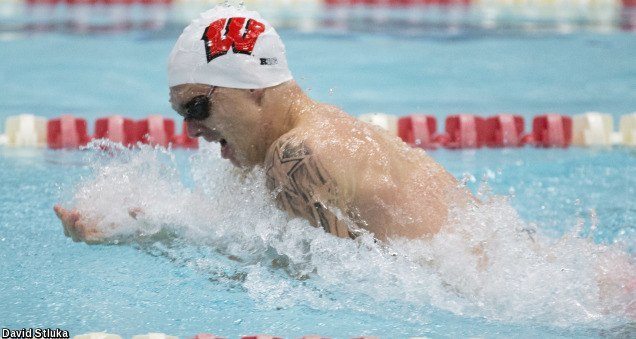 FULL MEET RESULTS HERE WOMEN’S MEET The #21 Wisconsin women were #1 in every single event as they walked all over the... Current photo via David Stluka

The #21 Wisconsin women were #1 in every single event as they walked all over the UW-Milwaukee Panthers. The sprinter-heavy Badgers put up a quick time in the 200 medley relay (1:40.43), their 2nd fastest time of the year, and that includes mid season invite meets. Senior Ivy Martin was fast, as per usual, splitting a 23.30 on the fly leg. However, it was emerging sprinter Chase Kinney who had perhaps the most impressive leg of that relay, splitting a quick 22.01 to anchor. The Badgers certainly look to have the fastest medley back-half in the entire Big Ten, and will be contending for a conference title in that event.

The pair teamed up with medley relay backstroker Annie Tamblyn and Aja Van Hout, the latter of which dominated the 400 IM (4:17.12), to rule the 200 free relay. While the Badgers started swimming in exhibition after the 500 free, they posted the fastest time by far in the final relay, touching in 1:30.64. The fastest split was a 22.16 from Kinney, who swam 2nd after Martin’s 22.43 lead off.

Florida transfer Danielle Valley stuck to one event, the mile, and won it handily. She finished in 16:35.63, heading out in a 1:56.63 and then holding 30’s the entire rest of the way until she finished with a 29.24 for the win. Valley won by almost an entire minute and was the only Badger in the race.

The #23 Badger men seemed to be on a mission, throwing down some pretty explosive times and shattering three UW Natatorium records in their dominating win over the Panthers.

Drew teDuits is back, folks. After failing to defend his 2013 200 backstroke NCAA title last year (he missed making finals altogether), the senior put together a wickedly fast 1:42.20 to break his own two-year-old pool record and win by over seven seconds. In addition, he was almost a full second faster than he was at NCAA’s last year.

Breaststroker Nick Schaefer went on a tear in the 200 breast, breaking a ten-year-old pool record and nearly clocking a season best. He touched at 1:55.52, over five seconds ahead of teammate Jake Mandli (2:00.89). Adding to the record-smashing madness in Madison was Matthew Hutchins, who swam to a win in the 1650 (15:17.17) and break the two-year-old pool record in that. He was the only swimmer to break 16 minutes.

Not to be outshined by his record-breaking teammates was sophomore Cannon Clifton. The emerging sprint star hit a dual meet best en route to his 100 free victory, clocking a 44.76 to win by almost two seconds. This was his first time under 45.00 in a dual meet this season.

The Badgers did give up one event, the 200 fly, to Panther senior Robert Miller. Miller touched in 1:56.21 over Badger Tj Thompson (1:57.78). Wisconsin, however, locked down both relays and took home wins in every other event to finish the meet on top, 145-93.

The Wisconsin men and women host Green Bay to cap off their dual meet season tomorrow at noon ET. This will be Senior Day for the Badgers.