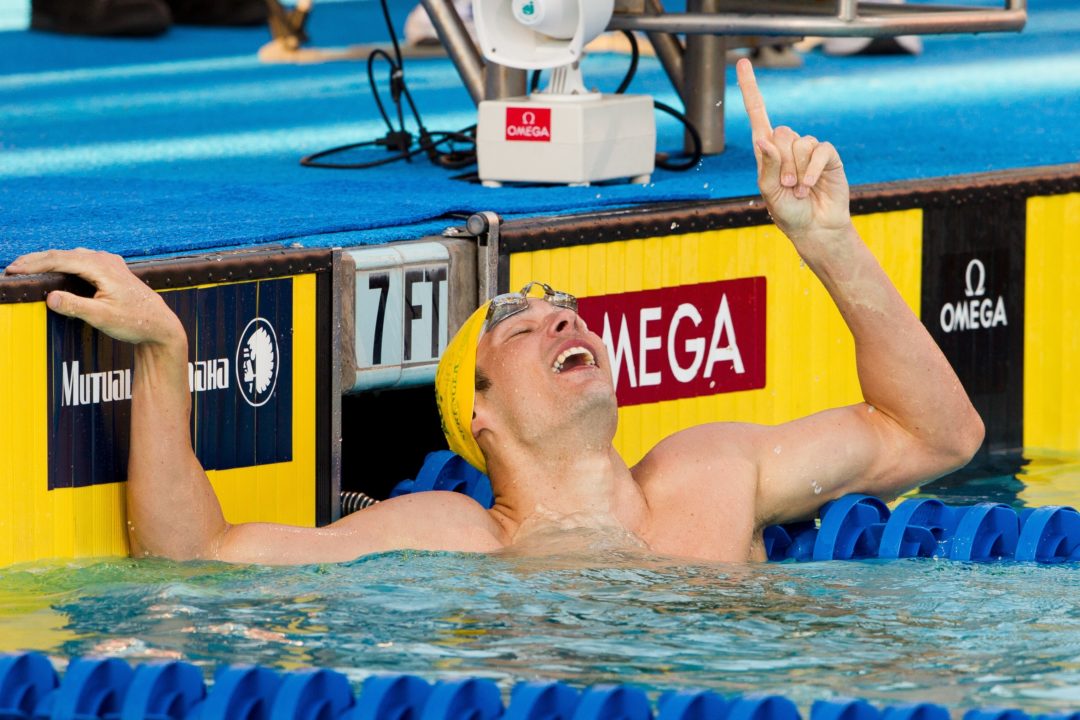 On the second day of the BHP Billiton Aquatic Super Series the Australians dominated the competition by winning 15 of...

On the second day of the BHP Billiton Aquatic Super Series the Australians dominated the competition by winning 15 of the 20 events and took home the $100,000 prize for being the top team in the two day event.  Cate Campbell, Matt Targett, Sarah Katsoulis, Christian Sprenger, Chris Wright, Myles Brown, Leiston Pickett, Emily Seebohm, Bronte Barratt and Thomas Fraser-Holmes all contributed to the Aussies final gold medal total of 25.

The medal standings at the conclusion of the event were as follows:

Sisters Cate Campbell and Bronte Campbell, who in London became the first two Australian sisters to compete at the same Olympics, took the two top spots in the 50 freestyle, a trend that the Aussies would continue for the next three events. Elder sister Cate won in a time of 24.46 followed by Bronte who posted a time of 25.11. Trudi Maree of South Africa finished third in a time of 25.50.

Australian Matt Targett won the event in a time of 22.00 followed by Australian teammate James Magnussen and Lu Zhiwu (22.59) of China.

Christian Sprenger of Australia dominated the competition in the 200 breaststroke in a time of 2:11.27. Fellow Aussie Brenton Rickard (2:14.30) finished second followed by Yunkun Huangy (2:17.64) of China.

In the first event that did not see an Aussie in the top two positions Lu Ying of China narrowly beat Australian Alicia Coutts for the gold. At the 50 mark Ying had a slight lead of four one hundreths of a second over Coutts and extended that lead minutely out touch Coutts by nine one hundredths of a second. Ying won in at time of 58.57 followed by Coutts (58.66) and Marne Erasmus (1:00.23) of South Africa.

In another exciting 100 butterfly event Chris Wright of Australia beat out teammate Jayden Hadler by eight one hundredths of a second. Wright took the event in a time of 52.69 with Hadler touching second in a time of 52.77 followed by Chen Yin (54.17) of China.

The Australian team made up of Cate Campbell, Bronte Campbell, Brittany Elmslie and Melanie Schlanger dominated the event finishing in a time of 3:39.05. The South Africans (3:49.57) came second due to a Chinese disqualification.

The Australian team made up of James Roberts, Matt Targett, Kendrick Monk and James Magnussen won the event but over three seconds finishing in a time of 3:18.33. The Chinese (3:22.02) finished second followed by the South Africans (3:25.41).

By winning the 50 breaststroke Australian Leiston Pickett prevented her teammate Sarah Katsoulis from sweeping all the breaststroke events. Pickett won in a time of 31.07 followed by Katsoulis (31.26) and Zhao Jin (32.29) of China.

Australian Christian Sprenger collected his second gold of the evening winning the 50 breaststroke in a time of 27.37, by winning the event Sprenger made it a clean sweep of the breaststroke events in the competition. South African Giulio Zorki (27.73) finished second followed by Australian Brenton Rickard (28.05).

Cheng Feiyi of China broke the Aussies six event winning streak by taking top spot in the 100 backstroke in a time of 54.42, just ahead of the two Australian entries Daniel Arnamnart (54.70) and Ashley Delaney (55.11).

Bronte Barratt proceeded to put the Aussies back on top of the medal podium winning the 200 freestyle in what was a tremendous battle with teammate Brittany Elmslie. At the 100 meter mark the two were separated by only 12 one hundredths of a second, Barratt gained a slight lead of 63 one hundredths of a second in the third 50 and maintained that lead in the final 50 winning the event in a time of 1:58.12, with Elmslie touching second in a time of 1:58.72 followed by Guo Jun Jun (1:59.59) of China.

Olympic champion and world record holder Ye Shiwen of China won the final women’s individual event of the competition with ease in a time of 4:37.04 followed by Australians Samantha Hamill (4:42.73) and Alicia Coutts (4:44.90).

As a result of the Australian and Chinese team being disqualified the South African team consisting of 13 year old Nathania Van Niekerk, Tara-Lynn Nicholas, Marne Erasmus and Trudi Maree won their country’s only gold medal of the competition in a time 4:13.80.

The Australian team made up of Daniel Arnamnart, Christian Sprenger, Chris Wright and James Magnussen won the final event of the competition in a time of 3:36.36 followed by China (3:41.39) and South Africa (3:42.37).

Just a shame the official refs on the 15m flags didn’t keep their eye on the job!!!! The Womens 100m Fly, Lu Ying came up way past the 15m mark after the dive but didn’t even get a DQ 🙁 Not fair for the Aussies.

Such a shame all the referees were not all on the ball at the super series. Aussies robbed in Womans 100 Fly. Lu Ying clearly come up well past the 15m mark after the dive. She should have been DQ. but she got away with it.!!!

Another impressive swim from Cate Campbell.
I hope she stays healthy in Barcelona.