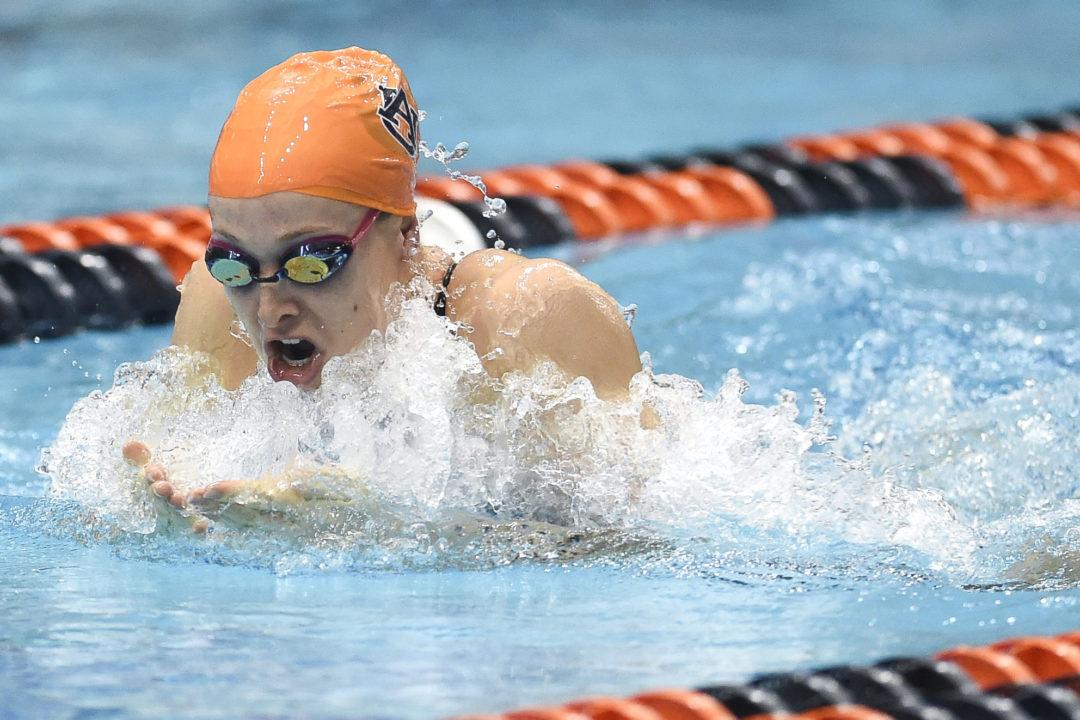 Natasha Lloyd of Auburn Swimming and Diving has been awarded a NCAA Postgraduate Scholarship. Current photo via Auburn Athletics

AUBURN, Ala. – Natasha Lloyd of Auburn Swimming and Diving has been awarded a NCAA Postgraduate Scholarship.

“I am so excited an honored to be a NCAA Postgraduate Scholarship recipient,” Lloyd said. “I am incredibly appreciative and thankful to be chosen because I know there are a lot of incredible student-athletes competing in the NCAA.”

Lloyd, from Ohoka, New Zealand, studied in the College of Human Sciences while an undergrad at Auburn. Majoring in organismal biology with a minor in English, she held a 3.76 GAP, was a three-time member of the SEC Academic Honor Roll, a four-time CSCAA Scholar All-American and a member of the Phi Kappa Phi National Academic Honor Society. She will graduate from Auburn in August before traveling to Africa for two months where she will volunteer as part of wildlife preservation.

“I am very excited to be able to make a positive impact now that I have finished swimming,” Lloyd said. “Swimming was a huge part of my life – it was most of my life – and I loved it. It is definitely part of the reason I am lucky enough to be receiving this award. Now I am looking forward to achieving bigger things now out of the pool and making a positive impact on our environment.”

Lloyd intends on pursuing a graduate degree in sustainable economics.

“My passion is the environment and I can’t bear the hideous atrocities and crimes that we are committing on the environment and natural world,” Lloyd said. “I will make a difference in helping businesses become greener so that everyone and everything, animals alike, can enjoy the beautiful world we live in.”

Lloyd joins teammate Zoe Thatcher in receiving one of the NCAA Postgraduate Scholarships awarded this year.

The NCAA awards up to 174 postgraduate scholarships annually. The scholarships are awarded to student-athletes who excel academically and athletically and who are at least in their final year of intercollegiate athletics competition.