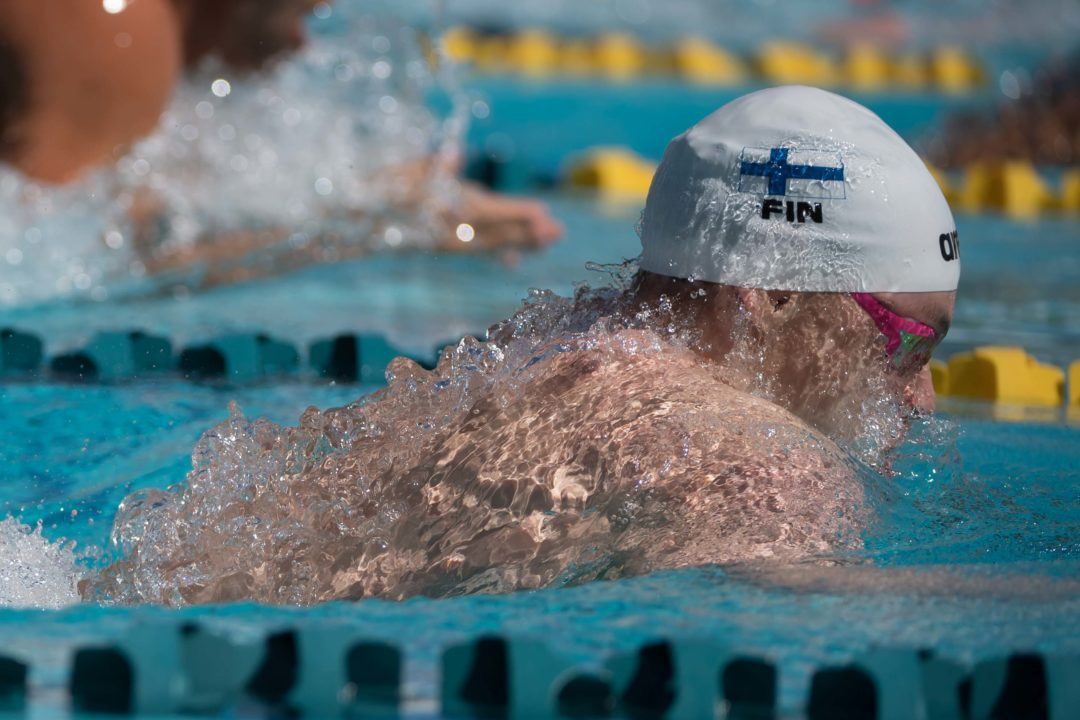 Ari-Pekka Liukkonen threw down a 21.58 in the 50 free, breaking the Finnish Record and moving to #5 in the world. Archive photo via Mike Lewis/Ola Vista Photography

Finnish sprinter Ari-Pekka Liukkonen put the world on notice on day 1 of the Finnish Championships in Tampere, clocking a new national record of 21.58 in the men’s 50 free.

Liukkonen had recently broken his old record of 21.92 at the Mare Nostrum stop in Monaco, where he took silver in a time of 21.90. Now less than a month later, he has lowered it again, this time by over three tenths, to move himself into #5 in the world.

Liukkonen missed the semi-finals at both the 2015 World Championships and 2016 Olympics, but instantly becomes a medal contender later this month in Budapest with that swim. In a rough translation from Finnish, Liukkonen has said his biggest challenge is the morning prelims, and that will be his biggest focus at the World Championships.

Internationally, Liukkonen has one individual medal to his name, a bronze in the 50 free at the 2014 European Championships in Berlin. He also has a bronze from the 2012 SC Europeans in Chartres, where his Finnish team took 3rd in the mixed free relay.

Another Finnish record fell on day 1 in Tampere, as Matti Mattsson broke a long-standing record in the men’s 100 breast.

Originally set in 2000, two-time Olympian Jarno Pihlava then equalled his national record in 2002, clocking 1:01.17 in the 100 breast at back-to-back European Championships. Mattsson cleared that record, putting up a time of 1:01.12.

Mattsson is known as more of a 200 breast specialist, as he won a bronze medal at the 2013 World Championships in the event. He finished 16th in the 200 at the Rio Games.

You have forgotten about Paweł Juraszek breaking polish national record in may with 21:68.

It is missing from our rankings, you’re right. We’ll update that. But it was covered in May: https://swimswam.com/juraszek-pops-21-68-50-fr-national-record-poland-sending-20-worlds/

Nice swim! Is there a link to complete Finnish results? thanks!

Fittingly done during pride some might say: Congrats to Ari, keep reppin’ for young gay men too scared to participate in the macho world of sport.

These usernames are getting weird

Quite openly so. He came out in 2014 in a protest against Russia, and won a national award for it:

A bit cramped in the sauna , no?

That’s 6’10 for the Americans playing at home.