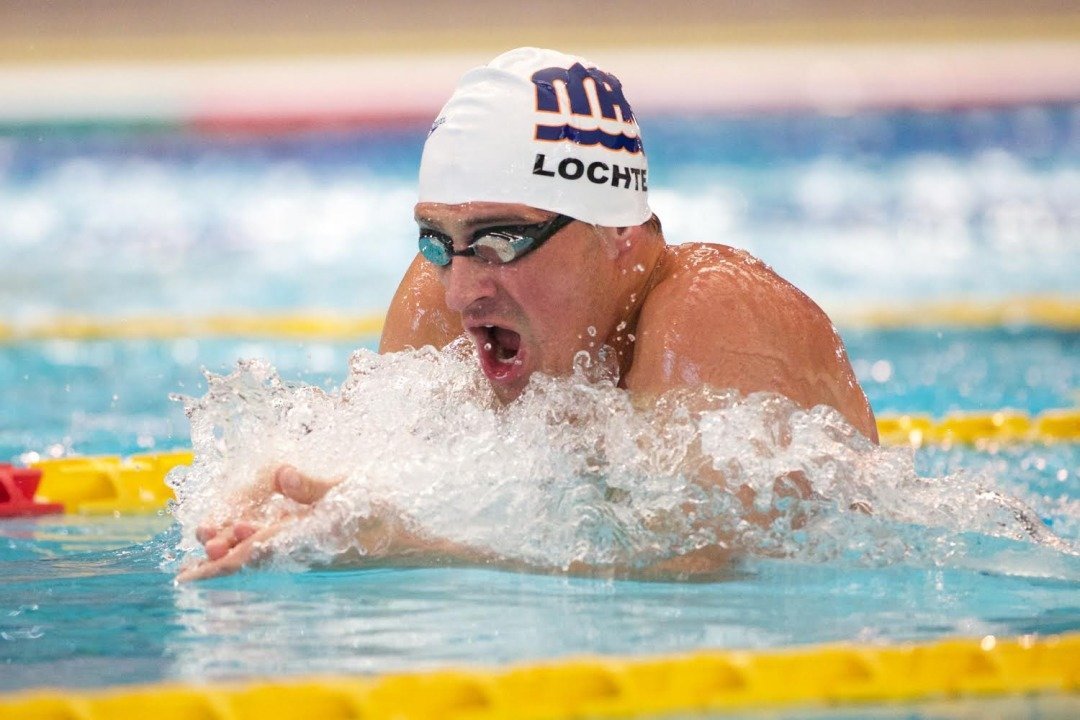 Ryan Lochte is top seed in the 200 IM in tonight's final session of the Arena Pro Swim Series at Orlando. Archive photo via rafael domeyko, rafaeldomeyko.com

In a relatively lackluster 800 free overall, the internationals dominated the day with South Americans Andreina Pinto (8:37.57) and Kristel Kobrich (8:39.13) leading the way. The two seemed content to settle into their pacing for the first 700 meters before really attacking the last 100, and that’s where the entirety of the difference came in this race (Kobrich actually was the pace-setter most of the way).

After an international-dominated 800 free to start the session, it was the Americans who rolled their way to a 1-2 finish in the 200 IM: a race dominated by top-flight breaststrokers. Caitlin Leverenz continued to transition her IM toward more of a front-half swim (she used to be famous for her back-half prowess).

She was out almost a full second in front of the field, which left St. Petersburg Aquatics’ Melanie Margalis to play catchup.

She did make up some ground on the breaststroke (three tenths) and the freestyle (three tenths), but ran out of room as Leverenz took the win and the big cash prize in 2:11.40. Margalis placed 2nd in 2:11.68, and the Brit Miley, right off of her swim in the 800 free, was a contextually-impressive 3rd place in 2:13.55.

There was a significant dropoff after Hoff to British 15-year old Georgia Coates in 2:18.05.

Ryan Lochte only wound up swimming a single event this weekend after some travel delays didn’t get him home to Charlotte until mid-week, but he made the most of that by winning the men’s 200 IM in 2:00.52.

Even at 30 years old, Lochte is still setting new personal standards in his swimming – that’s the fastest that he’s ever been in the 200 IM in February.

His former Gator Swim Club training partner Conor Dwyer made some ground back on the second 100 meters of this race, out-splitting Lochte on both the breaststroke (seven-tenths) and freestyle (seven-tenths), but Lochte’s lead was too big as Dwyer finished 2nd in 2:01.31.

Cody Miller made a huge move on the breaststroke leg of this swim, splitting 33.88, to accentuate what has been a fantastic breaststroke weekend for him. He placed 3rd in 2:02.72. Former Big Ten foe Kyle Whitaker was 4th in 2:02.98, and British teen Duncan Scott was 5th in 2:04.14.

Canadian Dominique Bouchard, who trains at the University of Missouri, was dominant from start-to-finish in the women’s 200 backstroke, swimming an electric 2:08.99 – her lifetime best by six-tenths of a second – still six weeks out from the Swimming Canada World Championship Trials.

Bouchard is renowned for how good she is in the last 100 meters of this event, but as her 100 continues to improve, so too does the front-half of her 200. While the overall swim improved her best by six-tenths of a second, the front half of this swim for her  was almost a full second faster than she was in her previous best at Pan Pacs.

Fellow Canadian Hilary Caldwell took 2nd in 2:12.06; she also split this race very well, going 33-mids on her second, third, and fourth 50’s. Great Britain 17-year old Charlotte Evans completed the medalists with a 2:14.25 for 3rd – just missing a personal best of her own.

Once again, the York YMCA swept in and ended the Commonwealth run, with Kacey Oberlander placing 4th in 2:15.34, which starts her long course season off with the fifth-best time of her career after a breakout summer.

Swimming his first long course meet since announcing his plan to gain Serbian citizenship and represent the country internationally, World Record holder Arkady Vyatchanin capped off a successful weekend with a 1:58.28 to top the men’s 200 backstroke. Vyatchaning split 29.73 over the last 50, a full second better than anyone else in this race, to really separate himself.

Taking 2nd was his former countrymate, and current Louisville sophomore, Grigory Tarasevich in 1:59.57.

Brtiain’s Luke Greenbank finished off yet another international 1-2-3 on the final day of this meet by swimming a 2:00.89.

Bahamian Arianna Vanderpool-Wallace completed her sprint sweep of the day with a 55.38 in the women’s 100 free. She sprinted out with an aggressive front-half of 26.29 and was able to hold off the field for the victory, with American veteran Amanda Weir placing 2nd in 55.70 and Canadian veteran Victoria Poon placing 3rd in 55.72.

Bucking the trend of youth success in the women’s A-Final at this meet, 4th-place British swimmer Lauren Quigley was the only teenager in the top 8. Alia Atkinson (55.06), Caroline Lemire-Lapierre (56.31), Hannah Riordan (56.67), and Katie Meili (57.22) topped off the A-Final.

The B-Final was a different story, with six out of eight being 18-years or younger, including winner Chloe Tutton (56.61) from Great Britain and runner-up Penelope Oleksiak (56.75) from Canada. Oleksiak is only 14-years old.

Team-international dominated the men’s 100 free, with six of the eight A-finalists (including the top five finishers) leading the way in the last A-final of the meet.

Brazilian Joao de Lucca was impressive again, after winning the 200 free, with a 49.34 on Saturday evening. This was a grid-locked field at the turn, but De Lucca having the fastest second 50 allowed him to win.

Club Wolverine’s Geoff Cheah, who swims for Hong Kong, placed 2nd in 49.70 – leaving him and de Lucca as the only swimmers under 50 in this race.

Marcelo Chierighini was 3rd in 50.27, followed by a third Brazilian, Bruno Fratus, in 50.33. While the times and the competition weren’t great, taking three out of the top four spots will have some consolation for the Brazilians as hype about the medal potential of their Olympic 400 free relay continues to build in local media.

Another trend in this race was four Club Wolverine swimmers, including Miguel Ortiz, who finished off the A-Final in 51.25.

The last individual event of the meet was the men’s 1500 free, and the outcome isn’t exactly what one might call “a battle.”

Former Texas teammates Michael Klueh and Michael McBroom were neck-and-neck for the first 400 meters of this race, but at matching timing, McBroom started to build his splits, while Klueh started to slow down. That trend went on for the next 800 meters or so, which left McBroom to win by 23 seconds – 15:16.82 to Klueh’s 15:39.97.

15-year old Saint Petersburg swimmer Robert Finke took 3rd in 15:46.39. He swam out of the slower heats, but carried all the way through to a third-place finish. That time was a nine-second improvement on Finke’s lifetime best and gave him his very first Summer Nationals cut.

Hard to watch a 800 free race won in 8.37 at a Grand Prix meet now we are used to Ledecky’s performances.

Leverenz is back after a tough 2014 year. Very good meet for her in Orlando.