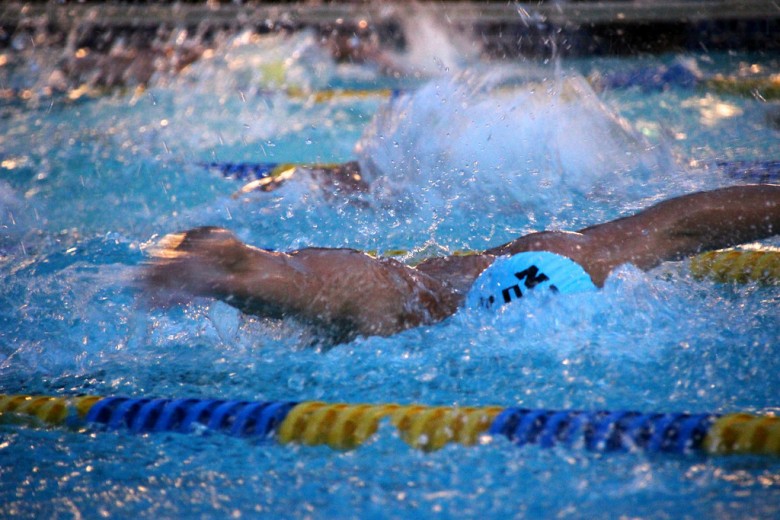 Brother Rice swept all three relays and saved their best swim for last, breaking the all-time Michigan state record in the 400 free relay to close out the victory.

Arakelian broke records in both his individual swims. He won the 200 IM in 1:47.47, breaking Division 1 and all-time records. Later, he won the 500 free with a Division 1-record 4:24.84. Arakelian, who has commited to Division II Queens University for next season, also put up two great relay splits. His 45.74 leading off the 400 free relay was the best of the field, and more impressive might be his 25.07 breaststroke leg on the 200 medley relay.

Afrik blew away the 200 free field to win in 1:38.18, winning by three seconds. He started his record-book onslaught late in the meet by winning the 100 free with a 43.90, breaking his own Division 1 record set in prelims.

Afrik then broke the Division 1 record in the 50 free while leading off Holland West Ottawa’s 200 free relay. Afrik went 20.27 and his relay took third. He also added a 43.66 split on the end of the third-place 400 free relay.

Brother Rice senior Joe Krause was a three-event winner for the weekend. He dominated the 50 free with a 20.63, nearly a half-second ahead of the rest of the field, and took second behind Afrik in the 100 free with a 45.47. Krause kept his sprinting skills sharp by swimming both of the freestyle relays.

Krause joined Bobby Powrie, Jack Kennedy and Bradford Jones on the 200 free relay, going 1:25.10 to eke out a win over Ann Arbor Pioneer. Krause’s 20.81 lead0ff split was the second-fastest of the field, trailing only Afrik.

He also anchored the 400 free relay in 45.48 in his fourth and final swim of the night. In that event, he and teammates Gust Kouvaris, Powrie, and Mark Blinstrub combined for a 3:02.06 that blew away the Division 1 and all-time records in the race. Blinstrub put up the relay’s fastest split at 44.92.

That relay set up several of the later individual winners. The fastest breaststroke split came from third-place Bloomfield Hills, where senior John Schihl split 25.02. He would go on to win the 100 breast at 55.39. In addition, the fastest medley relay backstroker, Jack Walsh of Detroit Catholic Central, went on to win the open 100 back. The junior went 49.08, just about a tenth off the Division 1 record set by Monroe sophomore Cameron Craig in prelims.

Congrats to Coach Shoemaker on his runner-up finish & Coach of the Year Award!