Andrew With an Encore – NAG #2 in Clearwater 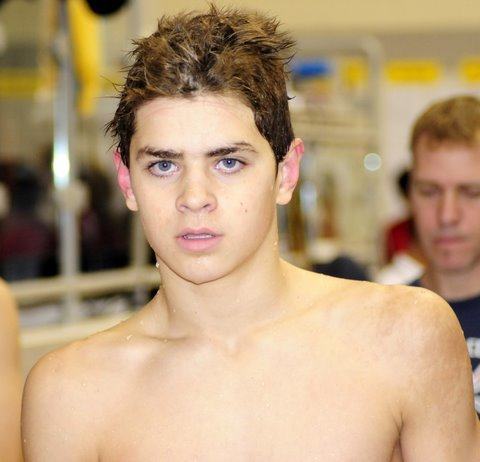 Michael Andrew took down the 2nd NAG Record of his final meet as an 11-12 on Saturday.

Ok, so perhaps my eulogy on Friday for Michael Andrew’s career as an 11-12 superstar was premature. Nobody told him that he was done. My bad.

On Saturday, he took down yet another NAG Record, pushing him to 20 record-breaking swims on the season. In prelims, he bettered his own National Age Group Record in the 100 yard breaststroke with a 1:00.07, which broke his 1:00.19 from earlier this year. He was faster than the old record in finals, but didn’t drop again, and took the win at the Showcase Meet in Clearwater with a 1:00.16.

It would’ve been great to see him break the minute barrier; he tweaked his breakouts just a bit coming into this meet, keeping his head down through the first two strokes off of each wall (check the video above from the Florida Swim Network, that has videos of all of the races. The 100 breaststroke heats start around the 5-minute mark). More and more swimmers at the age group level seem to be trying variations on this head-down stroke, as it seems to help them get into their rhythm a bit earlier in the race. Andrew just went out a bit too fast in this race (a full second faster than the morning in the first half of the race) and couldn’t hold on at the end.

It would be difficult to track historically, but I don’t know if anyone has ever broken records that many times in the same year. Maybe the combination of Michael Phelps and Larsen Jensen in 2003 when they were 17-18’s in 2003? Maybe Missy Franklin in 2010 as a 13-14 when she was breaking long course and short course marks? Those are the likely candidates in the last decade, at least.

Just for kicks, before the 100 breast final, Andrew swam the 400 IM, which he won with a three-second drop in 4:16.53. That’s not a record, but for what it’s worth, it is the 4th-best time in 11-12 history. I bet that in the next year, when he’s at the bottom end of his age group, he’s going to focus a lot on the 200’s and 400’s, and we’re going to see more crazy-good times from him. If that comes true, it will be interesting to see how well the low-yardage training style can adapt to a longer-race focus. I guess we can take this race as an indicator.

Before we wrap him up again, the meet will hold a long course time trial on Sunday. Maybe we’ll get to see 21 and 22 go down.

I do not understand the focus and attention to a 11-12 year old with so much swimming ahead of him even though his accomplishments are quite remarkable. We have all seen plenty of young swimmers setting records, only to have the field catch up to him. I do not think you are doing him any good by so much focus (second article in a week and one you pulled down). We had an age group coach that preached that the only thing that mattered was swimming fast by the time you are a HS Junior. I believe him.

I might be wrong, but it seems to me Braden writes about any NAG record breaking swim. Andrew just happens to break them a lot more frequently than most other kids.

Braden is there to inform us about swimming news. And he makes a great job. Michael Andrew is a young phenom. I’m happy to follow his performances. Perhaps he’s only a future Chas Morton or he’s a future half Michael Phelps. Nobody can predict that.
Isabella Rongione and Becca Mann have posted fast times too.
Just a question. Why do young swimmers in USA still swim in yards in April? Braden, you have covered age group championships in Australia this week. These young australian swimmers train in long course for a long time.

Bobo Gigi, nobody is questioning Andrew’s ability, talent as a swimmer. His accomplishments are truly impressive. What makes a lot of us uncomfortable is the fact that in 7 months this child has swum in 25 or 26 different meets; California, North Carolina, Florida, Virginia, Oklahoma ..the list goes on. To what end, what is the point? Records? You mention Phelps but Phelps wouldn’t have done that because Bowman realized that was not the goal and their still needs to be balance. You want to see an example of balance? How about Chalmers. Best of luck to this 12 year old. BTW, I take issue with your “only a Chas Morton” comment. Morton had a great college career by all… Read more »

Michael Phelps was fast very young and he’s today the swimmer we know.