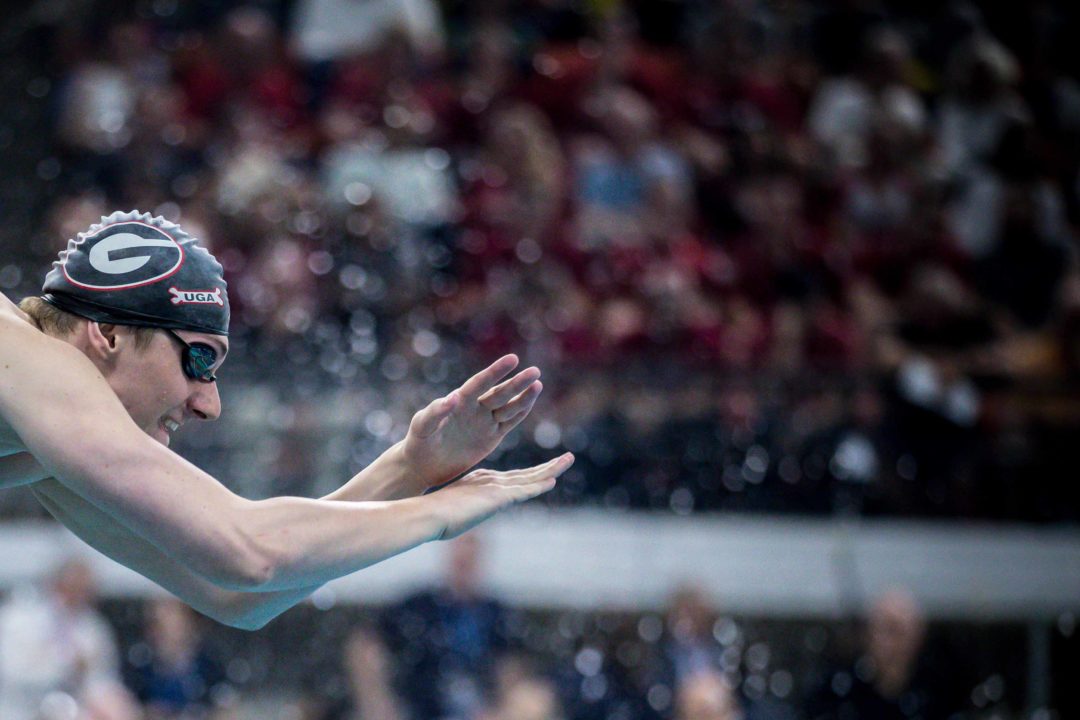 Abruzzo, who has been named to the CSCAA Scholar All-America First Team three times, graduated in May with a degree in finance. Archive photo via Jack Spitser/Spitser Photography

ATHENS, Ga. – Four University of Georgia student-athletes were awarded with NCAA Postgraduate Scholarships, as announced Wednesday by the organization.

Andrew Abruzzo (men’s swimming and diving), Ben Anderson (baseball), Samantha Drop (cross country/women’s track and field), and Shelby Tyler (women’s track and field) each received a $10,000 scholarship, tying the previous school record for recipients in a year. In 1997, the Georgia swimming and diving program posted four recipients, while in 2015, three Bulldogs swimmers and one women’s tennis student-athlete were honored by the NCAA.

The NCAA Postgraduate Scholarship was created in 1964 to promote and encourage graduate education by rewarding the Association’s most accomplished student-athletes through their participation in NCAA championship and/or emerging sports. Athletics and academic achievements, campus involvement, community service, volunteer activities and demonstrated leadership are evaluated. Recipients have a three-year period after they are finished competing to use the scholarship.

Andrew Abruzzo
Abruzzo, a native of Plymouth Meeting, Pennsylvania, graduated in May with a degree in Finance. Through four years at Georgia, he has earned three CSCAA All-America citations, competed at three NCAA Championships meets, and ranks eighth all-time in program history in the 500-yard freestyle. This past season, the swimmer earned the bronze medal in the 400-yard individual medley at the SEC Championships, having reached the SEC championship final in seven additional events during his career. Along with his accomplishments in Athens, he has been a strong performer in international competition, reaching two finals at the 2020 U.S. Olympic Trials and winning three gold medals at the 2019 Pan-American Games in Lima, Peru.

Abruzzo has been named to three CSCAA Scholar All-America First Teams and four SEC Academic Honor Rolls, in addition to multiple UGA Honor Roll appearances and Presidential Scholar honors in fall 2020. He is a team representative on the UGA Student-Athlete Advisory Committee and is a member of the Georgia Way’s L.E.A.D. Leadership Academy.

Ben Anderson
Anderson, a graduate outfielder from LaGrange, Georgia, is the first Bulldog baseball recipient of an NCAA postgraduate scholarship. Having already earned a degree in Biochemistry, he is working on a master’s degree in Comparative Biomedical Sciences with plans to go to medical school in the fall of 2023. Anderson was the 2022 SEC Baseball Scholar-Athlete of the Year, as voted on by the league coaches.

A co-captain, he batted .274 with 57 runs scored, 38 walks, five doubles, four triples, nine home runs and 34 RBI in 57 starts this past season. He was the 2022 Boyd McWhorter SEC Postgraduate Scholarship institutional winner for UGA. He had a 31-game on base streak and thrice led off games with home runs including to start the season. He posted a perfect fielding percentage in 142 total chances. He is a two-time CoSIDA Academic All-District selection, an annual member of the SEC Academic Honor Roll and the Dean’s List. He is a member of the L.E.A.D. Leadership Academy and the baseball player council. Anderson plans to play for the Bulldogs again in 2023.

Drop advanced to the 2017 NCAA Championships with her twin sister and teammate Jessica and earned All-America honors after taking 30th overall.  She earned NCAA Cross Country All-Region honors four times, claiming the 2017 NCAA South Regional title, and finished in the top eight twice at the SEC Cross Country Championships.  A competitor at 2018 NCAA Outdoor Championships in the 10,000 meters, Drop remains third on the school’s all-time list in the event and owns three other times that remain on the Lady Bulldog all-time top-10 lists.

Shelby Tyler
Tyler, a native of Noblesville, Ind., graduated in only three years with degrees in International Business and Economics. She was also awarded the Joel Eaves Scholar-Athlete Award for having the highest GPA of any senior female student-athlete entering her senior year last fall. Tyler has twice earned First Team All-America honors in the high jump, including a fifth place and First Team finish at the 2021 NCAA Outdoor Championships that featured a jump measuring 6 feet, ½ inch. In addition, the team captain was an Olympic Trials qualifier and scored at the SEC Championships a perfect five times. The Presidential Scholar and Dean’s List member also earned a minor in Spanish during her UGA tenure.