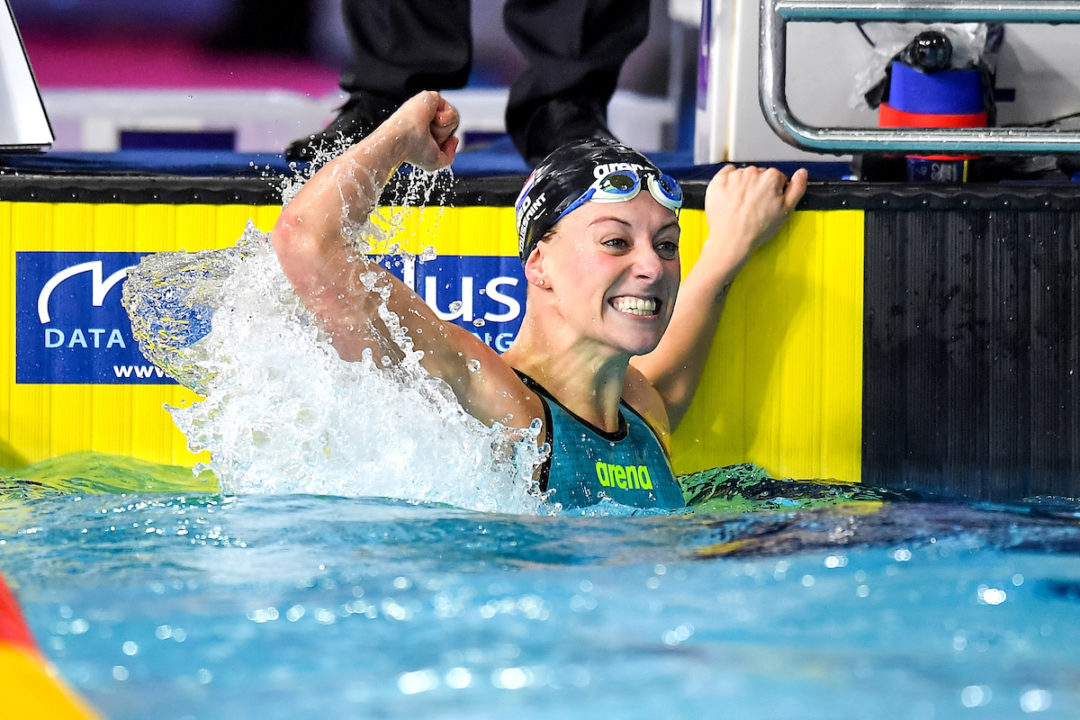 The first of three KNZB (Royal Dutch Swimming Federation) Swim Cups kicks off today, with the 3-day meet representing an Olympic qualifying opportunity for those descending upon the Optisport pool. Not only are elite Dutch swimmers in attendance, but a host of talent stemming from Spain, Switzerland, Israel and more are taking to the Amsterdam water in the hopes of notching a Tokyo-qualifying mark.

One swimmer to accomplish the feat was on-fire Dutch backstroker Kira Toussaint. The two-time gold medalist from the just-concluded European Short Course Championships fired off a time of 59.40 this evening to take gold in the 100m back. That time dipped under the 1:00.25 qualifying mark for Tokyo, etching the 25-year-old’s name onto the Dutch roster.

Toussaint owns the Dutch national record in the 59.14 she logged just recently in November at the FINA World Cup Series stop in Doha. Her outing tonight checks-in as the 2nd fastest time of her career, however.

Her Dutch record-breaking partner-in-crime, Arno Kamminga, was also a double gold medalist in Glasgow and he, too, grabbed a Tokyo-qualifying mark on day 1 here in Amsterdam. Leading the field from start to finish in the men’s 200m breast, the 24-year-old got his hands on the wall in a time fo 2:08.02, coming within a tenth of his own national record of 2:07.96.

Additional Olympic qualifying times came from foreign swimmers to the tune of South African dynamo Tatjana Schoenmaker getting it done in the women’s 200m breast.

The Commonwealth Games gold medalist powered her way to a time of 2:22.30 to get on top of the podium, coming within a second of the national record mark of 2:21.79 she produced at the World Championships this summer. She ultimately took silver in Gwangju.

Narrowly making it under the 2:25.52 qualifying time for Tokyo as well was Spanish national record holder Jessica Vall. Vall snagged a time of 2:25.49, giving her the consideration nod for the Olympic Games.

Fellow Spanish Olympian Mireia Belmonte contested the women’s 1500m freestyle, where the versatile star put up a winning effort of 16:13.61. That clears the 16:16.26. time standard needed for Tokyo and set the pace for her teammate Jimena Perez Blanco, who also got under the threshold in a runner-up outing of 16:15.46.

Spanish swimmer Hugo Gonzalez, who also competes for the Cal Bears in the NCAA, took the top time in the men’s 100m backstroke in 54.67. Gonzalez owns a personal-best mark of 54.18 from the 2016 Olympic Games, but this is a solid outing for the young man is a sign he’s perhaps in form for his other events.