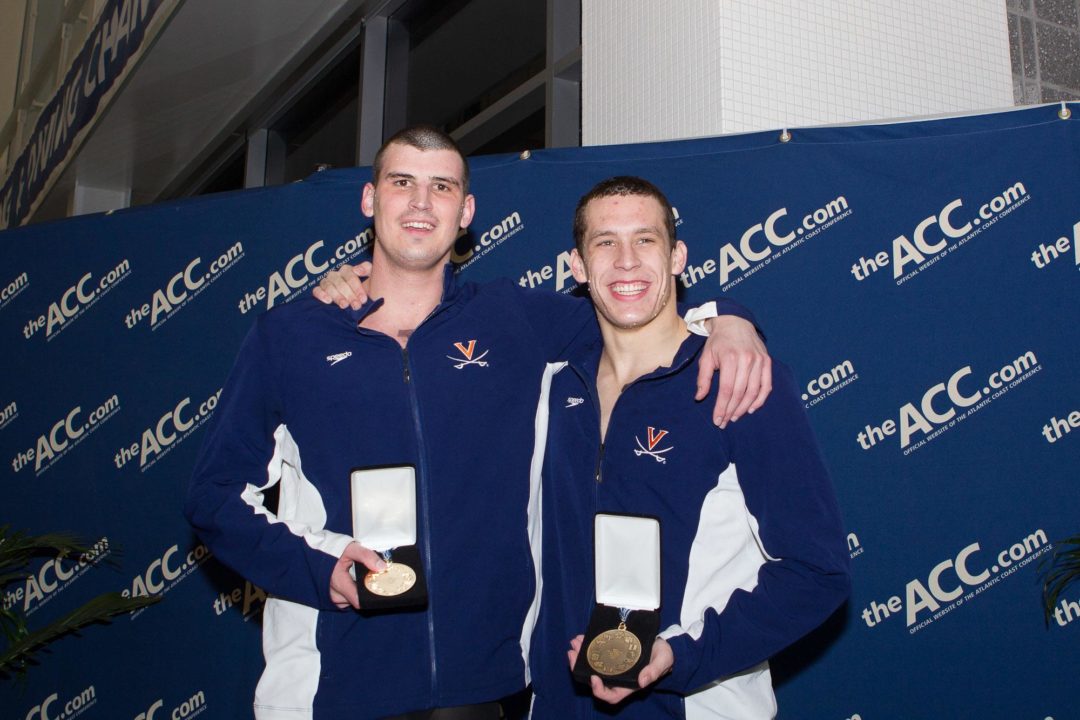 Nick Alexiou, right, was an All-ACC and Honorable Mention All-American performer for Virginia last year as a freshman, has decided to transfer to Florida. Archive photo via Tim Binning/TheSwimPictures.com

Kate Douglass had the slowest backstroke leg of the 200 IM final at the Olympics, but a new personal best on Friday shows that she’s working on that.

The University of Pittsburgh men and women swept in-state foe Villanova at Trees pool in Pittsburgh on Thursday afternoon.

The Virginia men’s and women’s swimming and diving teams host North Carolina on Friday afternoon and NC State on Saturday at the Aquatic and Fitness Center.

Former Virginia All-American Nick Alexiou has confirmed that he will transfer to the University of Florida in January. Florida makes a point of not to comment on whether or not mid-season additions will compete this year, and Alexiou says that it will depend on how fast he can get acclimated to the new program.

The freestyle races are Alexiou’s best. In yards, his bests are:

Alexiou is the second middle-distance freestyler that the Gators have snagged from the fallout at Virginia this year; after the Cavaliers released Mitch D’Arrigo from his letter of intent, he wound up at Florida for his freshman season this year as well.

Alexiou’s focus, if he competes this year, should be largely on seeing if he can squeeze a few individual points in at the NCAA level; the Gators are the defending NCAA Champions in the 800 free relay, didn’t graduate anybody, and added D’Arrigo to that group already. Alexiou should be a big scorer a the SEC Championships, as the Florida team, deeper-than-ever, will be the favorites to repeat as champions. Alexiou was 3rd at last year’s ACC Championships in the 200 free.

This move returns Alexiou to Gainesville for the sprint semester, which is closer to his hometown of Clearwater, Florida: about two hours south of Gainesville.

What’s up with Virginia? Anyone know why they are losing so many swimmers/recruits to transfers and changes of plans?

It’s a kind of peculiar situation, as yardage can’t be the case; and I would think Florida would be the last place swimmers concerned with high-volume workouts would head.

Busch versus Bernardino in terms of training, yardage and philosophy could not be more different. UVa has been a machine in middle distance and distance events for decades until now. Busch has said in a word he cares about replicating the Arizona way, which is more sprint focused because the NCAA points format favors that. No arguments here, that is just the math. While UVa did not compete for NCAA titles in the trailing decade, the line of middle and distance aces is staggering. UVa had been very consistent to develop high placing NCAA and Team USA qualifying athletes in those events, and was comparatively weak in the sprints for decades.

It should not shock anyone that the athletes least… Read more »

C Martin – you probably didn’t see the following couple of articles:
http://www.virginiasports.com/sports/c-swim/spec-rel/101813aaa.html
and this one: http://swimswam.com/two-virginia-mens-swimmers-including-american-alexiou-seek-transfers-2/
Without beating a dead horse you can probably figure out what happened. The team is doing great under Augie’s leadership, and the results have been really good so far. Personally, I can’t wait to see what happens in the next 3 months. No regrets.