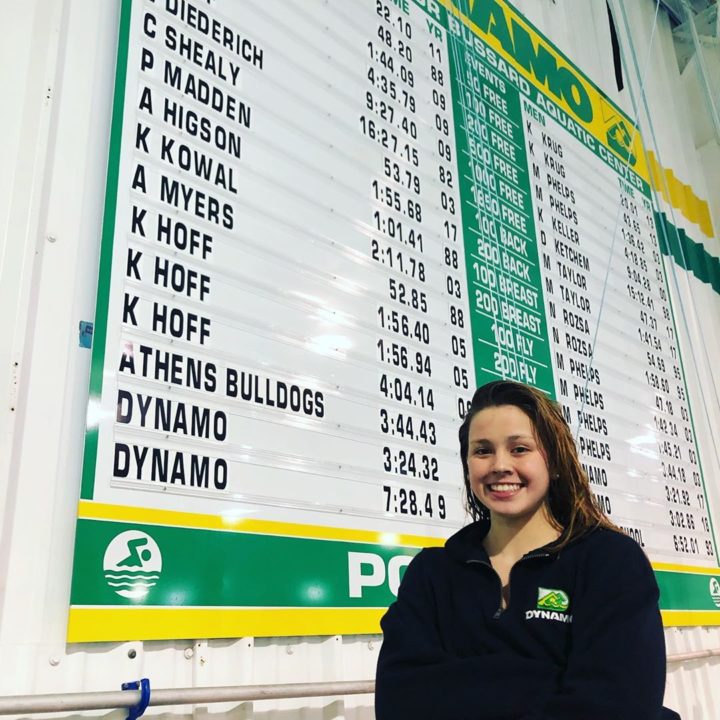 Swimming at the Speedo Eastern Classic in suburban Atlanta this weekend, Alicia Henry broke the Georgia LSC Record that had stood for 31 years. Archive photo via Dynamo Swim Club

During a recent interview, Bruno Fratus of Brazil stated that Cesar Cielo’s longstanding freestyle world records will fall before the 2021 Olympic Games.

On one April day in 1980, six American swimmers set seven world records in the 50-meter freestyle in an explosion of speed unlike anything before it.

van der Burgh broke the 50 WR for the third time when he edged a historically competitive field at the 2009 World Championships in a time of 26.67.

At the 2006 US Nationals, Brendan Hansen went on a double world record spree in the 100/200 breast. Read more on how Hansen took down the records here.

Joining some big names on the board! Congratulations to Alicia Henry on a new pool, Dynamo, and Georgia Swimming record in the 100 brst (1:00.20) at the Eastern Classic! 💪🏼 #GRIT #DynamoDNA

The meet saw teams from around the country, including the Colorado Stars, Lakeside Swim Team in Kentucky, Sandpipers of Nevada, the Mason Manta Rays of Ohio, City of Mobile Swim Association in Alabama, and the YMCA of Central Florida to races against the hosts Dynamo, which split into multiple groups for scoring purposes. The racing was done at the Bussard Aquatic Center, a historic facility which has had many of the best American swimmers of the last 20 years grace its blocks – including Pool Records held by Katie Hoff, Kristy Kowal, and Michael Phelps.

The highlight of the meet came in the women’s 100 yard breaststroke, where the 16-year old Alicia Henry swam a 1:00.20 in the final, which undercut the Pool Record of 1:01.41 that was set in 1988 by Allison Higson. Higson would go on to win an Olympic bronze medal in a 400 medley relay and an individual World Championship bronze medal in the 200 breaststroke representing Canada.

Henry, who swims for the host Dynamo Swim Club, is a high school junior who has not yet made a public commitment to swim in college.

Correct me if I’m wrong, but looking at the board, it seems she broke Allison Higson’s record of 1:01.41?

Congrats on a great swim, Alicia!

Nope you’re right, I misread the rows on the board.

That record board is quite impressive list of names, men and women. Mostly Olympians!

I believe blanchards record may have been set at the old downtown pine st y in Spartanburg. Very shallow pool