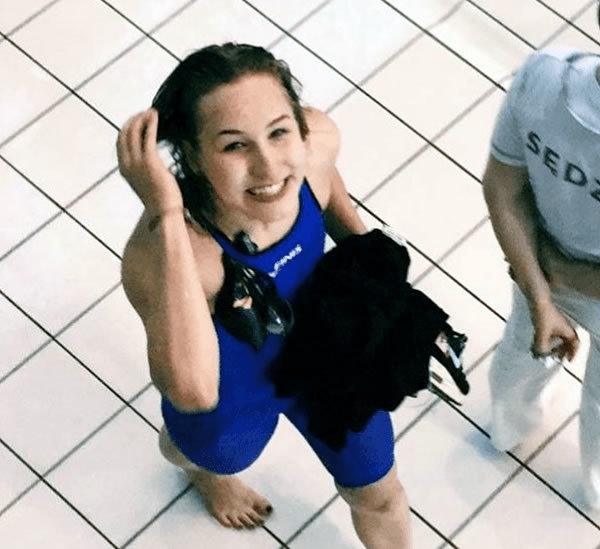 Akron downed Mid-American Conference opponent Miami (OH) in a 186-114 decision. The Zips won 11 of 16 events on the day, including both relays.

Paulina Nogaj kicked off her regular season with a speedy 53.61 to win the 100 fly. That time stands as Nogaj’s fastest dual meet performance in her NCAA career. Earlier in the meet, Nogaj earned a 2nd place finish in the 200 free with a 1:50.76, which was also her fastest dual meet performance to date. Nogaj also provided a quick 24.41 fly split on the 200 medley relay, which was the fastest split in the field considerably. Nogaj also led off the Akron A 400 free relay with a 50.81, which was only beaten by Lins de Mello’s 50.24 anchor.

Akron freshman Weronika Gorecka swept the backstroke events in her first NCAA dual meet. Gorecka swam a 55.54 to win the 100 back, clearing the field by about 2.5 seconds. She then clocked a 1:58.61 in the 200 back, which was good for the win by almost 7 seconds. Gorecka led off the Akron C 400 free relay with a 53.50.

OXFORD, Ohio – Akron Swimming and Diving team edged Miami in the first Mid-American Conference dual of the season, 186-114, to open the season in the win column.

“I’m really proud of our team today. Our energy, composure, and mental focus was excellent for this early in the season. Being early in the season, we definitely saw some technical things we could improve upon, and will do so in the weeks ahead” said head coach Brian Peresie.

In the 1000 freestyle, Akron senior Jessica Bonezzi (Wooster, Ohio) touched the wall second with a time of 10:20.37. Sophomore McKenzie Rice (Liberty Township, Ohio) finished shortly after, with a third-place time of 10:26.18.

Akron came back strong by winning the next two swimming events, with freshman Weronika Gorecka (Wroclaw, Poland) touching the wall in a time of 55.54 in the 100 backstroke and Garcia clocking in at 1:03.85 in the 100 breaststroke.

The two teams would split victories in the next two events.  Fresh off competing in the 1000 free, Bonezzi powered through for second place in the 200 butterfly (2:02.90). Henell posted her first victory of the season in the 50 free in a time of 23.71.

Akron came out on top in the one-meter diving event, with three divers finishing in the top four. Junior Andrea Bugariu (Shelby Twp., Mich.) placed first with a score of 265.35. Finishing second in her diving debut was freshman Paige Kalik (Irwin, Penn.), who finished with a score of 242.91.

Bugariu’s score was strong enough to qualify her for post-season competition at the 2020 NCAA Diving Zone C Championship.

Rounding out the top four was junior Megan Nugent (Rochester, N.Y.), who finished with a score of 223.19.

After the first eight events, Akron held a 94-47 edge over Miami.

The Zips would go on a winning streak from there, placing first in the next five events.

Gorecka was able to touch the wall first in the 200 backstroke, finishing at 1:58.61. Newcomer Victoria Kaufman (Westminster, Md.) finished third with a time of 2:06.75.

In her second race of the day, junior Brooke Lamoureux (Victoria, Canada) placed first in the 500 free, with a time of 5:02.69. Finishing second was senior Mackenzie Vargas (Roseville, Calif.) at 5:06.07.

In the 100 butterfly, three Zips finished in the top four, with Nogaj throwing down a scorching 53.61 to win the event. Teammate Bonezzi took third (57.89) while freshman Rachel Schiffli (Indianapolis, Ind.) placed fourth (58.15).

In the final individual event of the day, Pash had her highest finish of the day, placing second in the 200 IM with a time of 2:05.94.

OXFORD, Ohio – The Miami University women’s swimming and diving team (0-3, 0-1 MAC) fell to the defending MAC Champion Akron Zips on Saturday by a 186-114 margin. The RedHawks won five events during the meet.