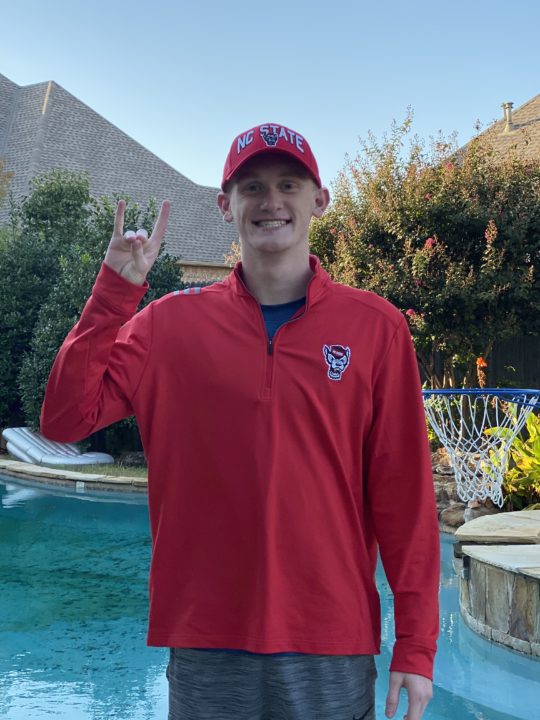 Aiden Hayes, an NC State commit and the #2-ranked recruit in the high school class of 2021, entered this weekend’s Winter Junior Championships as a known quantity in the sprint freestyles. He was the nation’s fastest high school junior in the 100 yard fly, and he backed up that sprint reputation with a 19.58 to win the 50 free on Thursday, followed by a 46.01 in the 100 fly and 46.31 in the 100 back on Friday to place 2nd and 1st, respectively.

But Hayes, swimming his 2nd race of the session, showed off a new dimension on Saturday with a dominant win in the 200 yard fly. The 16-year old from the Sooner Swim Club in Oklahoma swam a 1:41.34 that was nearly 3 seconds ahead of runner-up Jonathan Affeld in that race (1:44.02).

That time for Hayes moves him into 2nd place in USA Swimming history in the event among 15-16 year olds, behind only Luca Urlando (1:40.91). The swimmer he jumped for 2nd place on that list is one Michael Phelps, who until this summer was the World Record holder in the 200 fly in long course meters and who has won 10 major international gold medals in the 200 fly (including 3 times at the Olympic Games).

I swim for Jenks in Oklahoma and when I saw him swim a 1 min 49 sec (I think) 200 fly I was amazed. At the Fall Invitational in 2019.
Also in paragraph 3 there is a spelling mistake.

Impressive meet for Hayes.
Let’s wish him to win 3 olympic golds and one silver in the 200 fly.

Which three golds do you refer to?

🤔 Sounds like he needs to swim a 200yd free time trial now. He should be able to drop at least a1:38 if not faster