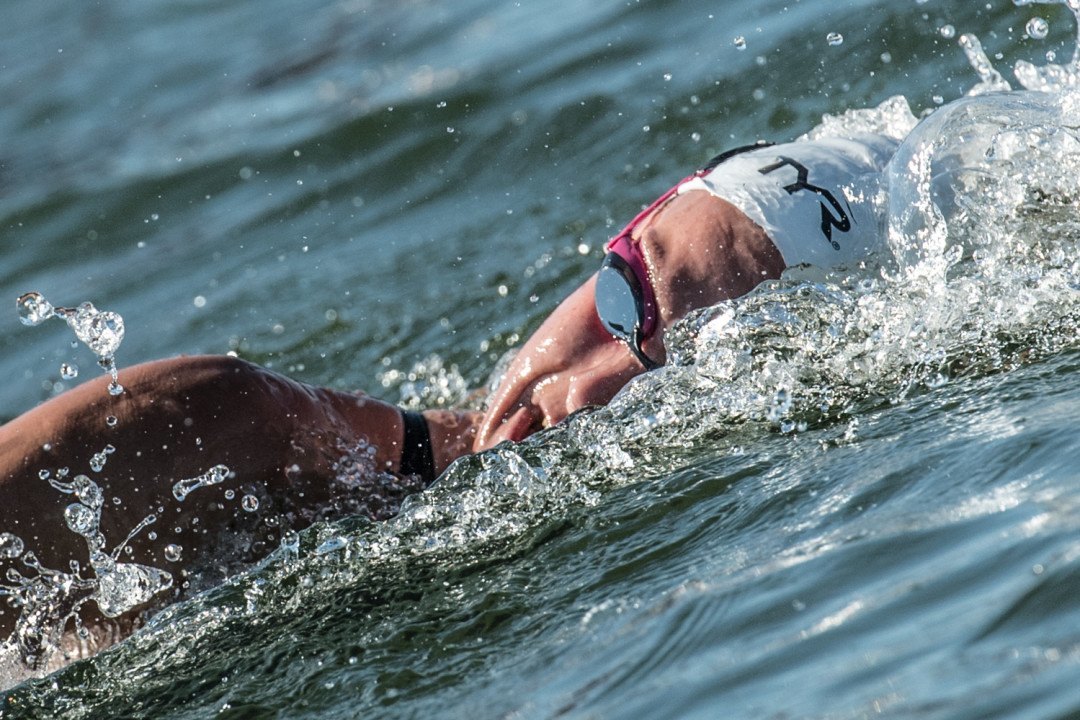 2-time World Champion Aurélie Muller of France has emerged from a period of self-reflection this summer and will move to Nice to train under Fabrice Pellerin. Archive photo via Mike Lewis/Ola Vista Photography

France’s Aurélie Muller, who has been one of the most consistent performers in open water since qualifying for the 2008 Olympic Games in Beijing, has had her share of knocks. Open water swimming is not for the faint at heart but Muller has had a couple of setbacks on the world stage that might have torpedoed the career of anyone else. Most notably, she was disqualified in the 10km race at the 2016 Olympic Games in Rio, the judges ruling that Muller obstructed Italy’s Rachele Bruni during the tightly-contested sprint toward the finish. Sharon van Rouwendaal of Netherlands, 17 seconds ahead of them, took gold. Bruni got the silver, while Brazil’s Poliana Okimoto moved up after the DQ to the bronze medal position.

Muller came back from that deception to compete at 2017 World Championships where she successfully defended her 2015 World title in the 10km race.

This summer, at the 2019 World Championships in Gwangju, Muller finished the 10km in a heartbreaking 11th place. Only the top ten qualify automatically for the 2020 Olympic Games in Tokyo. Muller spent the summer questioning her future. She finally made a decision which she posted on her Facebook page on Sunday: Muller is heading to Nice to train under Fabrice Pellerin. She will join a group that also includes pro swimmers Charlotte Bonnet, Jeremy Stravius, Jordan Pothain, and Jeremy Desplanches, and up-and-coming Tom Paco Padroni and Lilou Ressencourt, among others.

“As if I couldn’t do anything but fall, have difficulties, have to face things, be forced to raise my head, to question my desire to continue, to start again.

“What an infernal cycle. It’s exhausting, even for me!

“Even the most creative screenwriters of Netflix series would hesitate writing a story like this for one of their characters. Too improbable!

“Indeed, after having led the entire 10km race at the World Championships, the reigning world champion, on the way to defending her title, is caught and pounced on by the pack with 200m to go. OKAY…

“But this pack isn’t 8 or 9 swimmers, it’s 10, the tenth competitor being the Olympic champion -the Dutchwoman with whom she trains daily under the leadership of the charismatic Philippe Lucas in Montpellier- …

“And here in this final sprint, our swimmer gets swum over by an Italian, the same one that caused her to lose her Olympic medal in 2016…

“Once again it will take an interminable wait around a photo finish… before the judges decide that a tenth separates the Olympic champion from the World champion.

“Obviously, we couldn’t tie… There had to be just 10 girls because only the top 10 are qualified for Tokyo 2020…

“I will therefore be the eleventh! The protests over the conditions on this final sprint will obviously not change anything.

“The same actresses -we know them, it makes it easier for the public!- in a scenario once again unexpected, infernal, improbable, with the same tension, an unbearable waiting period… And the same issue that stings!

“Aurélie Muller, despite her fighting spirit, loses everything.

“Can one say that something is fishy? The story, surely. But after that?

“Does that make me “cursed?” Not at all.

“My path has been punctuated by great disappointments, immense disillusions, very often Olympic …

“Many times already I’ve had to hang on. Bounce back. And I be happy if that were not my trademark… But it has become my trademark! It’s my life. My destiny, to speak like a journalist.

“And since my journey is made up of incredible comebacks and almost anonymous comebacks – such as in the Tour de France and then the World Championships which no French channel made the choice to broadcast even though France was ranked the top nation in the world [in open water]! Why not just give up? Let go.

“I would like to… Maybe??… Some people advise me to do so.

“I cannot resign myself to the idea, though. I don’t want to end on a disappointment.

“I have to try again. Try, maybe, something else. Always believe in your lucky star.

“I have the ability. Otherwise I could not have done these races.

“I did not have the conditions to perform at my best level. I lacked the speed… My swimming technique did not suit me… It didn’t feel right …

“I also lacked serenity, confidence, in my surrounding environment.

“The general dynamic was not optimal. Impossible for me to perform at my best in this context.

“Only the frustration, the anger of the disappointment of the 10 km allowed me to snatch the title of World Silver Medalist in the 5km. But it was already too late. This terrible title demonstrates even more the stupidity of the non-qualification.

“Quit… It might be a solution. Should I persist? What is there still to go after, to prove? What challenges? What goals?

“All this turned in my head. All summer long. Leaving little room for respite and rest. It was only because I had to concentrate on my beginner’s surf lessons that I allowed myself to stop over-thinking [the situation].

“But as time went on, I saw my future emerge. I needed to dive back in!

“It could not be in Montpellier, even if training with Philippe is a real treat. Not right now, not today.

“It’s also difficult to throw myself headlong into open water training. That really beats you up…

“I needed something fresh. Something new.

“I was looking above all for a group with an experienced coach. Open, mature, and hard-working.

“No question of leaving France, of exile. No reason to search outside. I would have lived it not as an opportunity, but a punishment. I wanted to keep looking, to feel good again.

“So I searched. It seemed like an impossible solution. Each time there was something that held me back. It could not be possible that the French swimming world does not have a place to offer me to start over. A little differently.

“Not long ago, I sent a bottle to the sea. With a real desire. With frankness. With hope, motivation and maybe a little fear.

“And I begin in one week, in Nice, with a super group of swimmers and Fabrice PELLERIN.

Anne, thanks for sharing and translating this from Muller’s post. That was a beautifully written expression of her motivation and ambitions. Wish her luck as she pursued her dreams!

Fantadtically Napoleonic but she didn’t go far enough . I was hoping she’d set herself up in Elba & swim around ii daily as she peered off to the mainland with hopes of future glory. . Fabrice could surely text a few hints .& patriotic memes. .

Maybe the article title comes from the French word déception, which means more disappointment or frustration?

I am confused, who was deceived? Perhaps the word should be heartbreak.

I’m very confused by the title

I find “deception” an odd word choice in this context. Maybe there’s some part of the story I don’t understand.

Completely agree! Who has been deceived?!

Could be a translated word from a French text in pet.

Perhaps the word should be “defeat” or “disappointment.”

It’s a literal translation from French (also Spanish) where the word means disappointment.