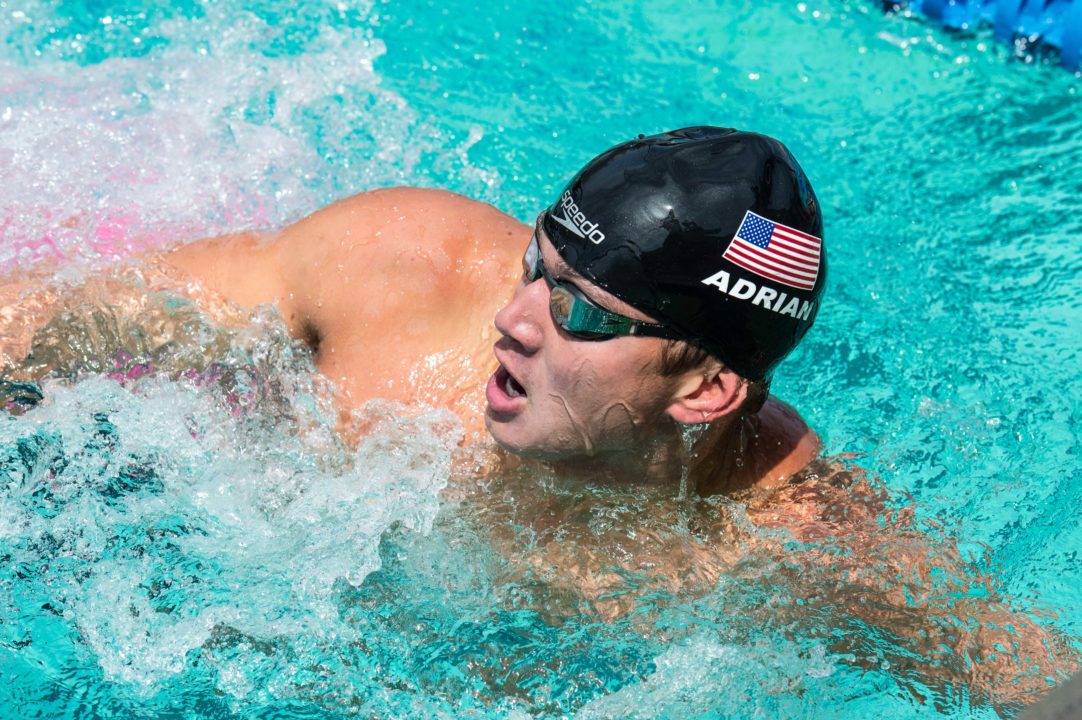 Nathan Adrian (above) and teammate Anthony Ervin are the two top seeds in the men's 50 free. Archive photo via Mike Lewis/Ola Vista Photography

The first day of the second stop of the 2014 Mare Nostrum series at the Meeting Mare Nostrum saw some new faces come to the series and others drop off. For example, after a successful Monaco meet that included a National Record in the 400 free, Hungarian Katinka Hosszu is absent in France. On the other hand, more big-name French, Russian, and British swimmers have joined the series.

Holding strong from Monaco are the two American sprinters: Nathan Adrian and Anthony Ervin. In a more traditional prelims-finals format than we saw in Monaco, they both went after prelims with times of 22.16 and 22.27, respectively. That took the top seed ahead of the defending Olympic champion Florent Manaudou, who was a 22.41.

In the men’s 50 backstroke, a tightly-bunched field saw the top 8 swimmers range from just 25.63 to 26.00, and it was less than a second from first place to out of the B-final altogether. That was led by a tie between Japan’s Kunya Koga, who won the 50 back in Monaco, and Britain’s Liam Tancock. Japan’s Ryosuke Irie was 3rd in 25.77.

On the women’s side, the 50 free field for the A-final is thick with talent. Arianna Vanderpool-Wallace, runner-up in Monaco, is the top seed in 24.86, tied with Denmark’s Jeanette Ottesen. The Monaco champion Pernille Blume slid dangerously to 6th in 25.40, but will have a lane in the final.

Denmark’s women overall had a good day, with three top seeds. Jeanette Ottesen took her 2nd of the day with a 58.30 in the 100 fly. Her biggest challenger in finals will be Canadian Noemie Thomas (59.11), though Camille Muffat (1:00.05) did manage to sneak into the top 8.

The Cal guys are fast this morning ! Adrian is really on a roll lately ! Ervin is not far behind ! very good training races before The nesxt Grand Prix !

nice to see Brits dominating in the Breaststroke. Murdoch should win, looking at his seasons best of 59.56