Academy Bullets respond: a glimpse into the formation and philosophy of a mega-club 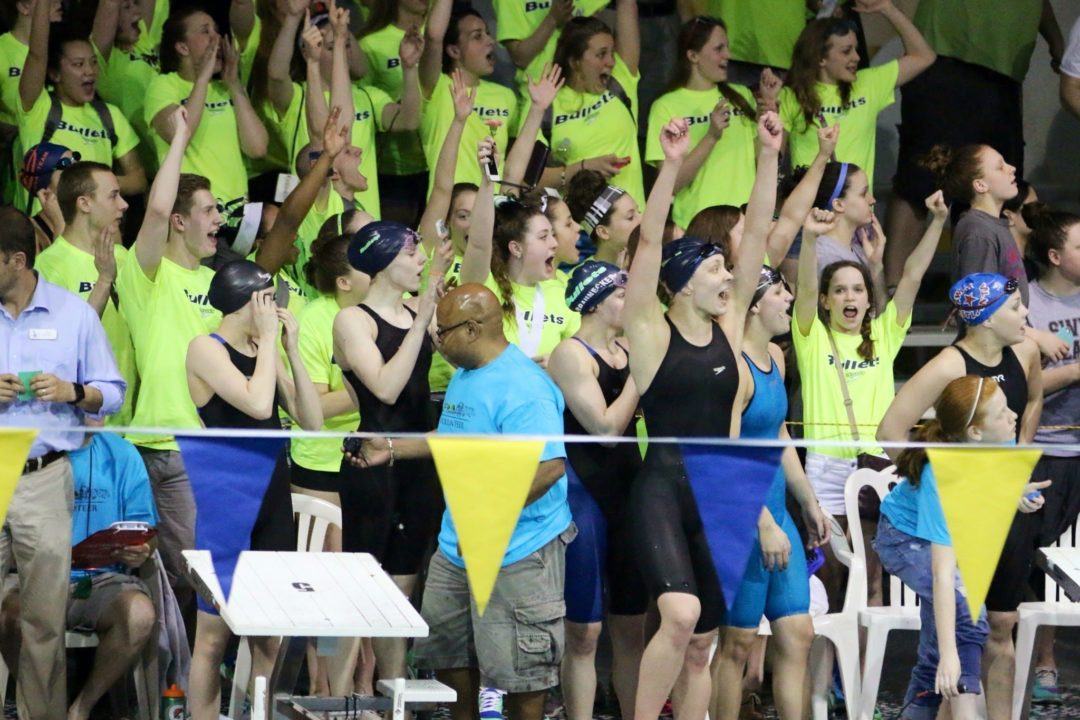 After some thought-provoking discussion in comments sections about multi-site "mega-clubs," SwamSwam caught up with Academy Bullets owner and coach Bill Schalz to learn more about his club's origins, structure and philosophy. Current photo via Tim Ryan

Our post last week about Rowdy Gaines taking over the South Florida YMCA swimming program inspired some passionate discussion in the comments section about the motivation, effects and philosophies of multi-location “super-clubs.” In order to help answer some of the major questions raised, SwimSwam caught up with Academy Bullets owner and coach Bill Schalz.

Schalz founded the Academy Bullets in 1994, which according to the club’s website was the first coach-owned swim team in Illinois at the time. In the 20 years since, the Bullets have grown to one of the largest clubs in the state, with four different locations and over 600 swimmers.

But the addition of those extra locations happened in a much more organic way than critics suggest, Schalz says.

“When we’ve added a new location, I was approached in every case by people wanting to bring the Bullets there,” said Schalz. “That seems to be one of the big misconceptions – I never went looking to expand my program. Other sites approached us.”

The additions have come in various ways. A mid-season coaching resignation in Springfield prompted one club’s boosters to meet with Schalz for advice. What began as a consulting meeting turned into the club asking to join the Academy Bullets umbrella.

In Riverside, a pattern of coaching turnover led to parents working to bring in a more established club program.

“The parent board of directors were a bit frustrated with hiring new coaches every couple of years,” said Schalz. “They felt that joining the Bullets would give them more consistency all around.”

When another Illinois club heard what Riverside had done, they decided they wanted in, too.

“When Bartlett found out about it, they called me to talk merger,” Schalz said, and thus the Bullets Bartlett location was born. Romeoville was added as a satellite through conversations with the Lewis University coach, who wanted a site for his college swimmers to train at over the summer.

Bringing various locations, each with its own coach, under the same umbrella led to some criticism of the Bullets for lumping different coaches with different philosophies under the same banner for meets. While Schalz said unifying the team is a challenge, he said its a challenge the organization has handled well.

“We’re not the Stepford Wives,” Schalz said, “where everyone is doing the same workout on the same day. We make it a point to hire great coaches and we want them to coach the way they coach because they’ve had success doing it.”

“On the other hand, we do want the team to be moving in the same direction. We have coaches meetings once a month and we do a lot of sharing workouts with each other.”

Schalz also said he’s seen his super-club grow more unified as the coaches learn from each other.

“As our coaches have gotten to know each other better, it’s been interesting to see their coaching styles come together and merge. It’s not accurate to say they are all coaching the same, but their coaching philosophies are definitely blending a bit.”

Schalz points to that sharing of information between coaches as a major reason why a large multi-site club system like the Academy Bullets helps give swimmers more to work with.

“The performance levels at all of our sites are better than before they joined our club,” he said, adding that the original site in Aurora has seen a distinct rise in its level of swimming as well.

“And at meets like [NCSA] Juniors, when we all come together and one athlete swims, chances are that some of our other coaches are watching them as well,” Schalz said, an extra set of eyes that can give swimmers diverse feedback they might not get from a coach who trains them on a daily basis.

With the rise of more and more multi-location mega-clubs across the country, this is a system that doesn’t appear to be disappearing anytime soon, though the philosophy and execution of the model is certainly up for tweaking and rethinking as coaches continue to mold their programs to fit the ever-changing world of age group swimming. One worry critics have is that the traditional concept of a “team” will fall by the wayside as swimmers from various areas go from complete strangers to fellow relay members on meet day before splitting up once again.

For its part, the Academy Bullets club is equally against that type of environment, Schalz said.

“You don’t want a situation where kids don’t know the other swimmers on their relay,” Schalz said. “We try to bring our groups together whenever we can.”

The good news is that in the social media age, once swimmers have met their teammates, they can continue building relationships even while separated by cities and zip codes by interacting on Facebook, Twitter and other networking sites.

Schalz noticed this while transporting his swimmers around at the recent NCSA Junior Nationals. “I was driving a van of athletes,” he said, “and we had a girl from Springfield and a girl from Aurora who were such good friends. I was blown away by this – two girls from different cities, but they were this close.”

“We’ve actually had other super-club coaches ask us ‘how are your kids such good friends?’,” Schalz said with a laugh.

Schalz says the Bullets still have much to learn about handling all of their locations – they’ve had the Bartlett and Springfield satellites for less than two years at this point – but are making a deliberate effort to take advantage of everything a multi-site club can offer.

“We really want to dispel the concept that it’s not in the best interest of kids,” Schalz said. “The kids are swimming faster, the coaches are working together, and we think that’s a good thing.”

Nothing wrong with the super team concept. In many ways they provide greater opportunities for swimmers and their families.

“We’ve actually had other super-club coaches ask us ‘how are your kids such good friends?’,” Schalz said with a laugh.

The only thing in this article that makes me cringe about the mega-club. Life is not perfect at every mega-club.

@ Low Gap, name me a non mega-club that is perfect…