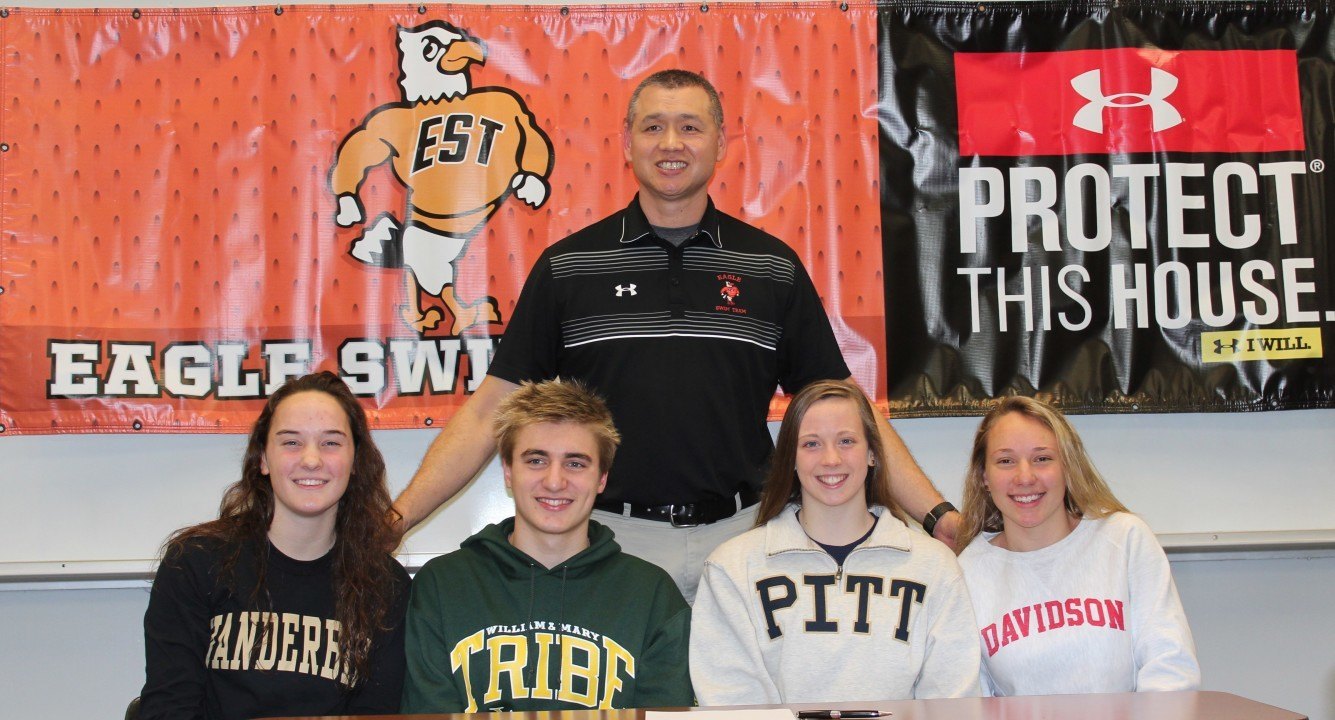 Eagle Swim Team, in Owings Mills, Maryland, is sending four seniors off to swim in Division I of the NCAA next year: Amanda Chabbott to Vanderbilt, Shannon Hochkeppel to Pitt, Ben Skopic to William and Mary, and Isabelle McElrath to Davidson.

A senior at McDonogh School in Owings Mills, Chabbott signed a letter of intent to swim at Vanderbilt University. Chabbott is a Junior Nationals-qualifying backstroker, but she is equally strong in distance free and fly. She won both the 200 free and 500 free at the 2015 IAAM A Conference Championships, and anchored McDonogh’s winning 200 free relay. She also led off their runner-up 400 free relay. Chabbott’s best times include:

Chabbott is a nice addition to the Commodores’ squad. Her 200 back, 1000 free, and 500 free times would all have been among the season’s top three last year. While she is still a bit off SEC scoring levels in her individual events, Cabbott should be within range to contribute to the Commodores’ 800, and possibly 400, free relays from freshman year on.

Hochkeppel is a senior at Howard High School in Ellicott City, Maryland. She signed an NLI to swim at the University of Pittsburgh next year. (We wrote about her earlier this month.)

A senior at Marriotts Ridge High School in Marriottsville, Maryland, Skopic excels primarily in IM and breaststroke. Skopic verbally committed to William and Mary after an outstanding summer season that saw him drop quite a bit of time in his main events. Skopic was an A finalist in the 400 IM and a B finalist in the 200 IM and 200 breast at the 2015 NCSA Summer Championships. He improved a respective 11.7 seconds, 6 seconds, and 7.7 seconds in those three events. Skopic’s top times are:

Even with only two scoring finals in the CAA Conference Championships, Skopic would have been valuable to the Tribe in 2015. He would have been an A finalist in the 400 IM and a B finalist in the 200 IM and 200 breast. And if he manages to improve in SCY even half of what he did in LCM over the past season, Skopic will be a big weapon in William & Mary’s arsenal. Skopic will join fellow-commits Chris Balbo, Colin Wright, and Lee Bradley in the class of 2020.

McElrath, also a senior at McDonogh School, committed to Davidson College. She is an IM specialist with polyvalent talent in the fly and breast as well. McElrath is the reigning IAAM A Conference champion in the 100 breast and runner-up in the 200 IM. She also swam butterfly on McDonogh’s 200 medley relay and participated on the 400 free relay, both of which were state silver medalists.

The Atlantic-10 is also a two-final conference, but already McElrath would have made an impact on the Wildcats’ results in 2015. She would have made the B finals of the 100/200 fly and 200 breast, and in a race where there were only 61 points between fourth-place Davidson and second-place UMass, McElrath’s scoring potential will be welcomed.

Congrats to these amazing kids! Your college teams are so lucky to have you!