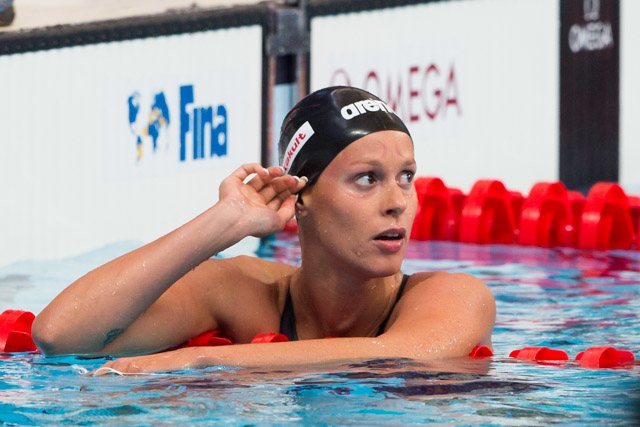 Italy has added two more men to it's 2016 Olympic roster on day 2 of the Italian Championships, and Federica Pellegrini became the first woman to reach the nation's Olympic standard despite already being qualified for the Games. Archive photo via Tim Binning/TheSwimPictures.com

Italy has added two more men to it’s 2016 Olympic roster on day 2 of the Italian Championships, and Federica Pellegrini became the first woman to reach the nation’s Olympic standard despite already being qualified for the Games.

All individual medalists from last summer’s World Championships are pre-selected for the Italian Olympic team, and both swimmers in that category have now hit the qualifying standards anyways. Pellegrini did so in the 100 free today, while Gregorio Paltrinieri qualified in the 1500 free yesterday.

In addition, Matteo Rivolta, Piero Codia and Federico Turrini have qualified for the team. Rivolta and Codia did it in the 100 fly, while Turrini booked his ticket through the 400 IM.

Codia’s situation is a unique one. Event winners have to hit an Italian “A” or “B” selection time. Runners-up must hit the “A” time to qualify. Codia set a new Italian record in prelims, but then faded to second in the final and missed both the A and B cuts. However, his prelims swim was an “A” time, so if Italy accepts prelim swims for their cuts, he should be in under the current rules.

It’s also worth noting that Italy improved its standing for a 4×200 free relay berth on the men’s side. That’s the only relay Italy did not qualify for the Olympics out of last summer’s World Championships. The top 12 teams from Kazan are already in, and the next 4 top times worldwide will earn berths on May 31.

Looking forward to Pelligrini in the 200 and Paltrinieri vs Ryan Cochran in the 1,500.

Is that for Silver??? or you have never heard of Mack Horton

well in all honesty he also forgot Sun Yang

Tom, you forgot a whole host of swimmers, LOL!

About men’s 4×200 free, the winning time (performed by Aniene A) can be easily improved with Mitch D’Arrigo in the mix. Today D’Arrigo has swum the best leg with a 1.46.8.

I have a question.

According to the Selection Standars the priorities for the 2016 Olympics are:

SwimArg – good find. That seems to make sense, provided nothing changes in the lineup before Euros. Marin isn’t officially added to the Olympic roster yet, but should be well in line for a spot after Euros.

Thank both. Yeah, we will see after Euros what will happen.

She is an incredible athlete. Hopefully she finishes her career with a huge 200 free in Rio.

Fastest textile swim over 100m did she go faster wearing 2 LZR’s at once??