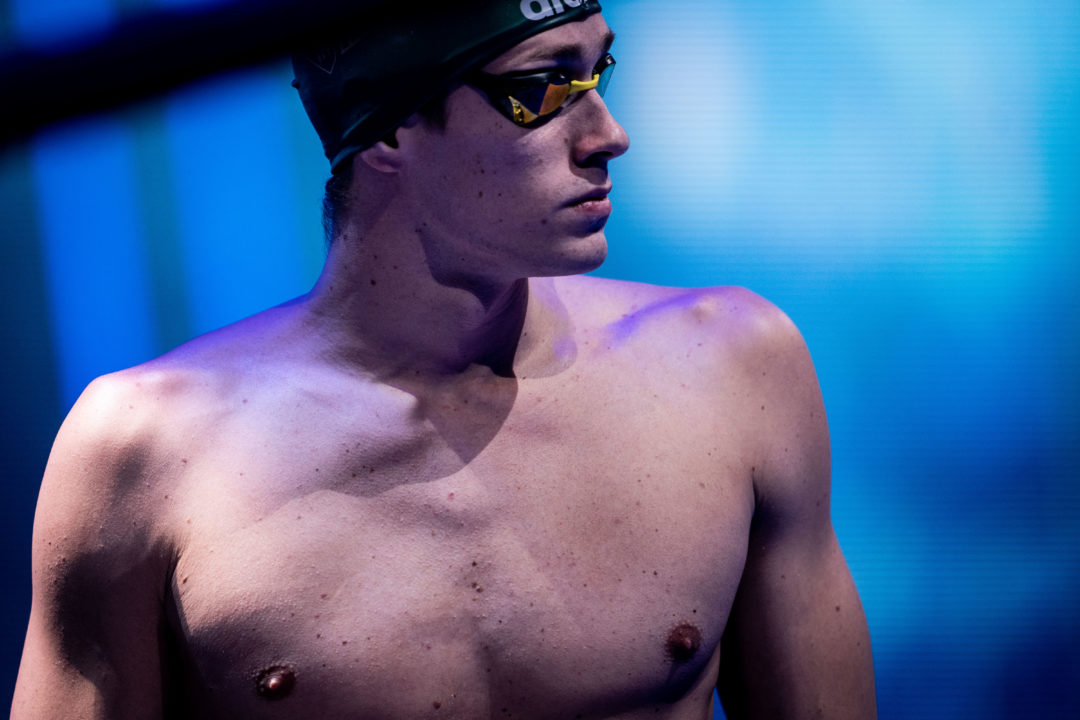 The first three days of the Russain Spartakaid are in the books, with many Olympians like Kiril Prigoda (pictured) in attendance. Archive photo via Mine Kasapoglu for ISL

With four days of competition completed, swimming at the 2022 Russian Spartakiad is more than halfway done.

The multi-sports Spartakiad of Summer Sports was revived this year in response to the ban of Russian and Belarusian athletes from most international sporting competitions, including swimming. In March, FINA banned Russian and Belarusian athletes from FINA-sanctioned competitions for 2022 due to the Russian invasion of Ukraine and the ongoing war. FINA also pulled the 2022 Short Course World Championships from Kazan and relocated them to Melbourne, Australia.

This is not the first time the Spartakiad has taken place. The event was originally organized by the Soviet Union as a propaganda event among its member states and the name is still used for internal sporting events from the local to national level.

This is not the only meet the Russian Swimming Federation has created for their athletes this year amid the ban. They’ve also hosted the swimming-specific Russian Championships and the Solidarity Games.

At the Spartakiad, athletes compete in teams based on their home-regions. The meet has attracted lots of Russian stars, including Stanford swimmer Andrei Minakov, who returned home to Russia after competing at U.S. Nationals and Evgeny Rylov, who separate from the ban on Russian athletes, is serving a nine-month suspension from FINA meets for appearing at a pro-war rally.

Among the regions participating is Crimea, which Russia annexed from Ukraine in 2014, though most of the world still recognizes the region as part of Ukraine.

The meet features a full slate of events, including both single-gender and mixed relays.

The home team of Saint Petersburg got off to a strong start on day 1, taking two relay wins–the men’s 4×100 freestyle and the women’s 4×200 freestyle relays.

On the men’s side, Roman Shevlyakov, Minakov, Vasily Kukushkin, and Alexander Shchegolev combined to win the men’s 4×100 free relay in 3:15.57, winning easily over Moscow, who, anchored by Kliment Kolesnikov, clocked 3:17.00. In an interview prior to the start of the meet, Minakov revealed that he had COVID-19 prior to U.S. Nationals, which had been one of his focus meets for the summer along with the Spartakiad. As the third-led of the relay, he split 49.37.

There were two individual event finals, the men’s 400 freestyle and the women’s 400 IM, which were won by Moscow’s Daniil Shatalov and Anna Chernysheva, respectively. Shatalov swam 3:48.61, which is just off his personal best of 3:48.20 that he swam at the Russian Championships in 2020. Chernysheva 4:46.76 to win the women’s 400 IM, starting her fourth meet of the summer on a positive note.

In the semi-finals of the men’s 100 backstroke, Rylov–the Tokyo Olympic gold medallist–was disqualified for a false start.

With Rylov out of the 100 back final, it was the Tokyo silver medallist Kolesnikov who took the win, posting 52.90. That’s well-off what it would have taken to be in the medal hunt at World Championships, where all three medalists broke 52 seconds in a blistering final.

There were tight races in both the men’s 200 freestyle and 100 breaststroke. In the 200 free, Mikhail Dovgalyuk edged Martin Malyutin for the win, 1:47.20 to 1:47.49. After the race, Malyutin spoke about his preparations for the meet, saying that the season was “emotionally very difficult. It was hard to train the 400m, and yesterday it didn’t work at all. So far, there is not the same motivation that was before to show such a result.”

It was an even closer race in the 100 breaststroke, Daniil Semyaninov swam 59.64, getting the better of Kirill Prigoda by just four-hundredths of a second. Russian record holder Anton Chupkov finished third, behind the two leaders in 59.95.

Though Russian swimmers are banned from FINA competitions, like many of the top swimmers from other countries, they had a busy summer schedule. Some opted to focus on the Spartakiad, while others put the emphasis on the Solidarity Games. Semyaninov commented on this after his win, saying that “Maybe I was just lucky. The season is long, anything can happen. I swam faster at the Friendship Games, although the emphasis was on the Spartakiad.”

Volgograd swept the women’s 800 freestyle podium, with Margarita Ershova, Yana Kurtseva, Polina Kozyakina touching 1-2-3. Ershova touched first in 8:38.01, with Kurtseva second at 8:42.63, and Kozyakina rounding out the medals in 8:43.57.

Ustinova claimed her second victory of the meet, winning the women’s 200 backstroke in 2:13.60. She was over a second ahead of the silver medallist, but wasn’t very impressed with her racing. She commented that “[her] form is not very good right now, it’s good that [she has] enough of it to just win.”

Anastasiia Markova overtook Svetlana Chimrova to win the women’s 200 fly in 2:08.83. That’s just off the best time of 2:08.41 that she set last year at European juniors in Rome.

In the women’s 100 freestyle, Maria Kameneva was the only swimmer under 54 seconds, clocking 53.89 to beat Darya Klepikova by almost a second. Ustinova earned another medal, tying for third with Daria Surushkina in 55.06.

Moscow earned the top two places on the men’s 100 fly podium. Peter Zhikharev took the win in 51.08, with Andrei Zhilkin a distant 51.78. Rounding out the podium was Mikhail Vekovishchev, who also got under 52 seconds in 51.85. Zhikharev was pleased with the result, saying that “The victory was definitely not easy, now it is very difficult to motivate yourself and set yourself up for the next all-Russian competitions. I do not like to stagnate, but because of the situation in the world, all athletes are forced to do this. Today I wanted to prove to everyone that I am worthy of attention and that I am no worse than my teammates.”

This was Zhilkin’s return to competition. He said he hadn’t raced since January due to a shoulder injury, which was preventing him of training on his back at all.

After getting disqualified in the 100 backstroke, Rylov rebounded in the 200 back, taking the win by almost three seconds. He swam 1:55.90, which is good for sixth in the world this year behind Carson Foster‘s 1:55.86.

In the women’s 100 breaststroke, Nika Godun out-touched Evgenia Chikunova, 1:06.77 to 1:06.83. For Godun, that time is .11 seconds off the lifetime best she set earlier this season at the Russian Championships.

In the men’s 50 freestyle, Kolesnikov earned his second win of the meet. He swam 21.69 to win, the only one in the field to break 22 seconds. Daniil Markov finished second in 22.11. Markov’s best is 21.85, which he swam at the Russian Championships this year.

Minakov shouldn’t be allowed to come back to Stanford now.

So Minakov went and kissed the ministry of sport on both cheeks. If I were in Stanford, I will not be happy to be on the same team as him.

The information about Kirill Prigoda in the article is way off. His best time before this year was a 2:07.85, which he swam in october of 2020. He even lowered that best time to a 2:07.25 at the solidarity games a few weeks back.

It’s a shame that so much hate is being directed toward any Russian athletes regardless of who they are. They didn’t declare war on Ukraine. Many of them are young swimmers trying to compete at their best just like anyone from the US or any other country. They have much more in common than you would be led to believe.

Consequences are not hate. Millions of Ukrainians have been displaced and lost husbands, wives, parents and children. Thousnds of Ukrainian children have been taken and “adopted” by Russian parents – A war crime. This is an attack (not a war) on the people, history and culture of Ukraine, an attack that most Russian people support. If being banned from intl sporting events is the worst consequence Russian athletes face, then they are extremely lucky. I don’t hate any individual, but I am ashamed to be of the same species as a society capable of such a display of callous indifference to human suffering, and until Russian society speaks up I have no sympathy for them.

This completely misses the point. The Russian athletes haven’t committed any war crimes. I would imagine none of the Russian athletes or citizens (“society” as you say) at large are speaking up for fear of the consequences of doing so. The athletes themselves shouldn’t face any consequences (with the exception of maybe Rylov) because they haven’t done any wrong. I think I am correct in stating that Russian athletes have faced hate due to the actions of their government. Just look at the comments on any Russian related article on this website. I don’t condone Russia’s actions against Ukraine but I think the swimmers and being needlessly targeted and punished.

Furthermore, we’re going to embarrass them when they return.

I don’t care what Russia is doing in any sport.

Agreed. This should not be reported here. It lessens the site

Didn’t Prigoda go like a 2:07 low at the russian solidarity games?

Happy independence on your fake war😂😂😂