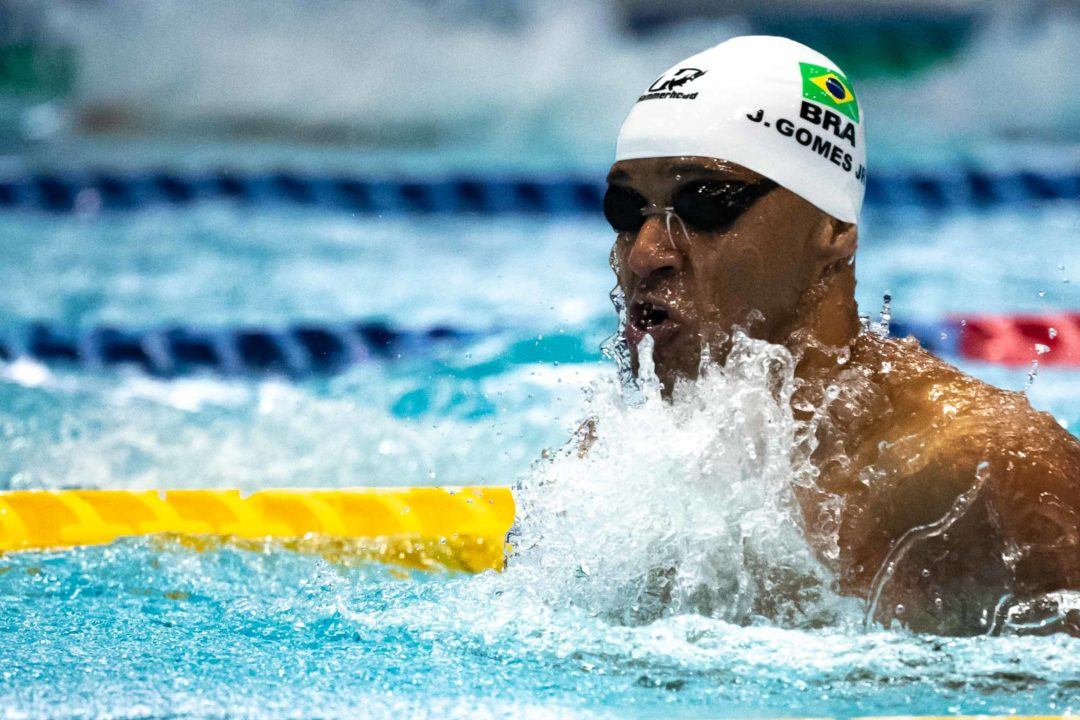 On top of easily clearing the FINA 'A' cut of 27.33, Gomes' swim stands as the #1 time in the world this year by a large margin. Stock photo via Mike Lewis/Ola Vista Photography

In a short prelims session this morning, heats of the 50 breast and 200 fly took place. Today will also feature timed finals of the women’s 1500 free and the 4×200 free relays.

Following her Brazilian Record in the women’s 100 breast on Monday night, Jhennifer Conceicao roared to the top time of the morning in the 50 breast. Conceicao notched a 30.75 this morning, touching first by nearly a second. She’s already well under the FINA ‘A’ standard of 31.22. Conceicao is also closing in on her own Brazilian Record (and South American Record), which stands at 30.40 from last year.

Joao Gomes didn’t waste the opportunity to throw down a fast time this morning, speeding to a 26.66 in the men’s 50 breast. On top of easily clearing the FINA ‘A’ cut of 27.33, Gomes’ swim stands as the #1 time in the world this year by a large margin. He was also just off Felipe Lima’s Brazilian and South American Record of 26.33. Caio Pumputis, who trains at Georgia Tech in the United States, was 2nd this morning with a 27.09. The swim marks the #3 time in the world this year, and Pumputis was well under the FINA ‘A’ cut to boot.

It wasn’t Tokyo 2020 Olympic finalist Leonardo de Deus who led the field this morning in the men’s 200 fly. Actually, de Deus was 4th this morning, swimming a very relaxed 2:00.38, well off the 1:55.36 he swam last summer. It’s noteworthy that de Deus is already qualified for Brazil’s World Champs roster in the 200 fly by virtue of qualifying for finals at the Olympics last summer, so his placement tonight isn’t all that important.

Instead, Matheus Gonche led the way, swimming a 1:59.18. He wasn’t the only swimmer in the field under 2:00 this morning, Kaue Carvalho finished 2nd in 1:59.51. The FINA ‘A’ standard is 1:56.71, so for someone to qualify to join de Deus on the World Champs roster, they’ll need to swim much faster tonight.

All these old Brazilians going crazy fast times is so sus

You just don’t like Brazilians going fast? Or did you not expect peaty to be below number 1

Lima has a quicker 50m Brest than Gomes I thought and is therefore the Brazilian record holder?