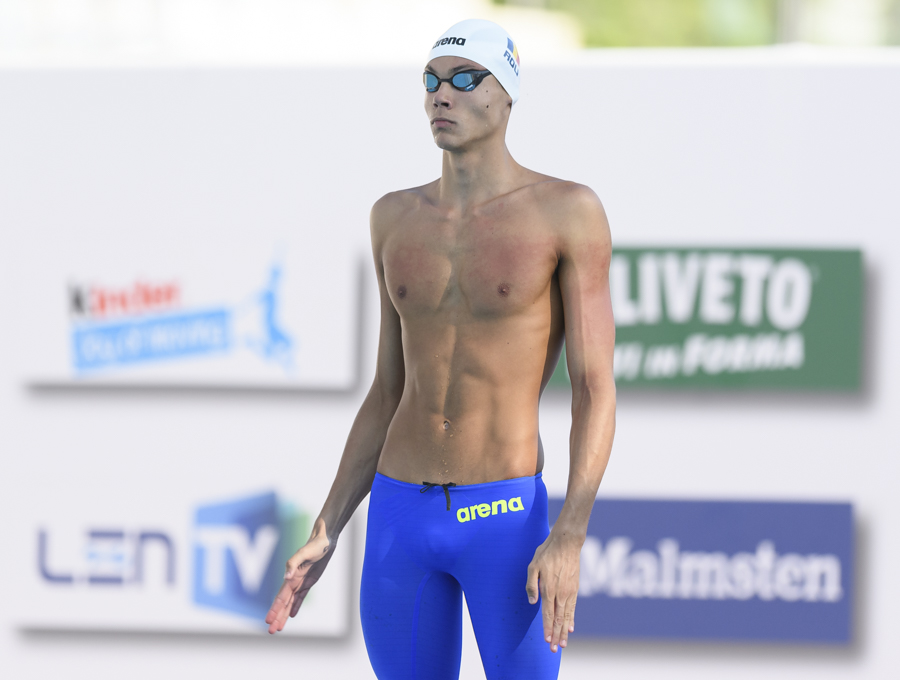 Tonight we'll see if 16-year-old David Popovici of Romania can make it a trifecta of gold across the sprint freestyle events. Current photo via Andrea Masini / Deepbluemedia / Insidefoto

After reaping two silvers already here across the 50m and 200m butterfly events, 15-year-old Lana Pudar got it done for gold in this 100m sprint.

Hitting the wall in a near-lifetime best of 57.56, the Bosnian and Herzegovina athlete beat out a pair of Russians in Daria Klepikova and Anastasiia Markova, who touched in respective efforts of 58.07 and 58.73.

As for Pudar, she holds the national record in this event with the 57.37 she produced in Serbia earlier this year. Tonight, she opened in 26.74, the only sub-27 second split of the field, before bringing it home in 30.82.

Pudar trains with the Orka Swim Team in a 25-meter pool in her hometown of Mostar. She’s been swimming with the club since she was five years old under coach Alena Cemalovic. Bosnia has only two Olympic-size swimming pools: in the capital Sarajevo and in the northern town of Banja Luka.

You can read more about the Bosnian records which have bitten the dust over the course of these European Junior Championships here.

Holding off his competition by more than 2 seconds, the bronze medalist in the 200m IM here blew his previous personal best of 4:19.77 out of the water. That result was posted just last month, so the 18-year-old entered new territory with his victory tonight.

Jakub Bursa gave the Czech Republic its first silver with a mark of 4:19.20 after the nation already had 2 bronze medals entering this event, while Artem Vorobev of Russia rounded out the top 3 tonight in 4:20.21. For Bursa, he had never been under 4:20 before, owning a previous PB of 4:22.59 from April.

Of note, the nation of Germany finished the 2019 edition of these Championships in 2nd place in the overall medal table, reaping 7 total golds. Two years later, the nation snagged its first gold on the final day of competition.

This women’s 100m breaststroke race came down to the thinnest of margins, as Estonian Eneli Jefimova just out-touched Elena Bogomolova of Russia by a mere .01.

Jefimova trailed Bogomolova at the halfway mark, with the Russian busting out a swift opening split of 31.20. But 14-year-old Jefimova wouldn’t be denied, charging to the wall in a back half of 35.21 to finally claim gold after settling for bronze in the 50m breast and silver in the 100m breast.

Bogomolova was the 50m breast silver medalist and 200m bronze medalist here already while Poland got on the board for the first time in women’s breaststroke here, courtesy of Karolina PIechowicz landing 3rd place in 1:08.93.

Poland was medal-less at the 2019 edition of these European Junior Championships while here in Rome the nation ranks 9th on the overall medal table heading into the final day.

A pair of Poles in brothers Krzysztof Chmielewski and Michal Chmielewski claimed the top 2 spots in this men’s 200m fly, with the former setting himself apart from the field in the only sub-1:57 time of the night.

Chmielewski actually competed in this event at the Senior European Championships this past May where he notched a lifetime best of 1:55.46 in the prelims. The teen ultimately wound up just one spot out of the final, settling for 9th in 1:56.51 there in Budapest.

This is a fresh set of medalists in the 200m fly, with no top-3 finisher in the 100m fly getting onto the podium.

Merve Tuncel ripped a new lifetime best en route to topping the women’s 400m free podium. The 16-year-old completed her mid-distance trifecta of golds, adding this 400m free victory in 4:06.25 to her top prizes from the 800m and 1500m distances.

She clocked European Junior Records in the 800m and 1500m free but settled for a new Turkish national record here in this event.

Hungary’s Bettina Fabian snagged silver in 4:10.16 while Giulia Vetrano of the host nation collected bronze in 4:12.23.

Of note, Tuncel took the 400m free national record from Beril Boecekler, who previously held it in 4:06.68 from February. Boecekler, who is committed to UCLA, finished 4th here in 4:14.38, well off that previous record-setting mark.

Despite both Kaloyan Levterov of Bulgaria and Berke Saka of Turkey holding quicker seed times, it was another Pole in Ksawery Masiuk who soared to the top of the podium in this men’s 200m backstroke.

Stopping the clock in 1:58.41, 16-year-old Masiuk got under the 2:00 mark for his very first time and chose the right occasion on which to accomplish the feat. He represents a surge of Polish talent that is currently wreaking havoc on the medal table for the nation thus far here in Rome.

Masiuk has been a big part of that, earning bronze in the 50m back and gold in the 100m back.

Another Pole got to the top of the podium, this time in this women’s 200m backstroke. Laura Bernat beat the field tonight by over a second, hitting the ewall in 2:10.14. That was enough ot hold off a multi-medalist here in Katie Shanahanof Great Britain.

Shanahan has already reaped gold across the 200m IM and 400m IM, as well as silver in the 100m back. She settled for silver here in 2:11.27 after a hectic week of racing.

The top 5 swimmers all got under the 23-second mark, led by the on-fire Romanian David Popovici.

16-year-old Popovici produced the quickest time of the field by over half a second, clocking 22.22 to take his 3rd gold medal of these Championships. Popovici already topped the podium in the men’s 100 and 200m free, hitting the world’s #1 time in the former in 47.30.

As for this 50, tonight marks Popovici’s personal best, knocking .19 off of the 22.43 he logged in Budapest at the Senior European Championships.

A new European Junior Record was established in this women’s 50m free by way of Daria Tatarinova‘s gold in 24.87. The 17-year-old demolished her semi-final performance of 25.10 to scorch her first sub-25 second time ever, beating the EJR 24.88 benchmark by .01 in the process.

For perspective, Tatarinova’s time tonight would have placed 7th at this year’s U.S. Olympic Trials.

Croatia snared its first medal of these championships with Jana Pavalic scoring silver in 25.35. That’s just off her own national record of 25.28 set during the semi-finals.

Bronze tonight went to a 14-year-old in Great Britain’s Eva Okaro. Okaro crushed a lifetime best of 25.33 in the semi and was just off that here in 25.45 to land on the podium. Her time from last night’s semi’s establishes a new British Age Record for 14-year-olds. For additional perspective Okaro’s 25.33 from the semi-final would rank her as the 2nd fastest American 13-14-year-old of all time.

Turkey finished 1-2 in this men’s 800m free, led by 18-year-old Yigit Aslan. His time checks in as a lifetime best, beating his own national record of 7:51.60 from last month’s Turkish Summer Championships.

Behind him about a second dlater was Mert Kilavuz, with his teammate making it a two-man race. Luca Di Tullio of Italy was well beyond, but still under 8:00 in 7:58.10 for bronze.

The combination of Aleksandra Kurilkina, Elena Bogomolova, Anastasiia Markova and Daria Klepikova gave Russia the gold in this women’s medley relay. Kurilkina led off in 1:03.26 while Bogomolova took over in 1:06.79. Markova kept up the momentum in 58.12 while Klepikova wrapped up gold in 54.55.

As for France and Great Britain, both of their lead-off legs were much quicker than Kurilkina, with Mary-Ambre Moluh of the former nation hitting 1:01.41 while Katie Shanahan of the latter produced a 1:01.83 opener.

Bogomolova proved to be a big difference-maker, clocking the fastest breaststroke split by nearly a second, with the anchor for Russia was the 1 of 2 sub-55 second outings. The other was produced by Tamryn Van Selm of GBR.

Poland capped off its tremendous night of racing to gold in this men’s edition of the medley relay. The foursome of Ksawery Masiuk, Bartosz Skora, Pawel Uryniuk and Mateusz Chowaniec got it done in 3:37.46, beating Russia who touched in 3:39.30.

Russia’s Vadim Klimenishchev posted the fastest fly leg of the field in 52.89 while Poland’s Masiuk logged the quickest opening backstroke split. Teammate Chowaniec also ripped the only sub-49 second anchor of the field in 48.79 to help seal the deal.

Poland doing great things today! May be quite competitive in a few years in Olympic/world meets

John26,
that one is easy to answer:
He probably doesn’t do training towards FULL SPRINTING sets and lack of heavyweights(for now).
I remember Brazilian Pedro Spajari opening his 100free in 22.4 at Brazilian Trials and doing only 22.0 in individual 50free. He told it was hard to shift his pace to “full-burst” mode to extract more speed(He was expecting 21.8, still not very fast after opening in 22.4).
Gustavo Borges had difficulty being very fast(in 50 free) too.

France has a promising female generation.
In 3 years we’ll have a competitive women’s 4X100 medley relay at home.

That’s a wrap! See you in tokyo in 2 weeks

I don’t follow Turkish swimming. Are there some people here who have seen that new generation coming? Are there new coaches? Don’t tell me it’s the result of Bob Bowman who has been consultant several years to the Turkish swimming federation.
Of course when a nation not used to winning destroys the competition immediately the suspicion is there. And I can’t blame those who are suspicious.

They send their elite team this week , some boys and girls will compete in tokyo as well , the others are the juniors of populat swimming countries

With Energy Standard and Grigorishin.

They hired an italian magician (just like Kenya/Ethiopia/Uganda in athletics). When you take into account that they have no moral integrity (buying kenyan athletes in bulk for their distance running program and were the main reason for one of the dirtiest races at the olympics all time (women’s 1500 m at the 2012 olympics)), no fan of clean sports should be happy about this development.

There are several italian coaches who is supporting particularly this generation. (Gjon shyti e.g) it is all about good generation nothing more, do not think that it would be sustainable for long years. Please do not blame the people with your prejudices; it is a shame to ignore the efforts of these youngsters.

I AM BEYOND THRILLED that SwimSwam has accepted this comment.

[Note: I’m wearing my SwimSwam T-Shirt as I write this.]

Nice to see France with some promising female swimmers!