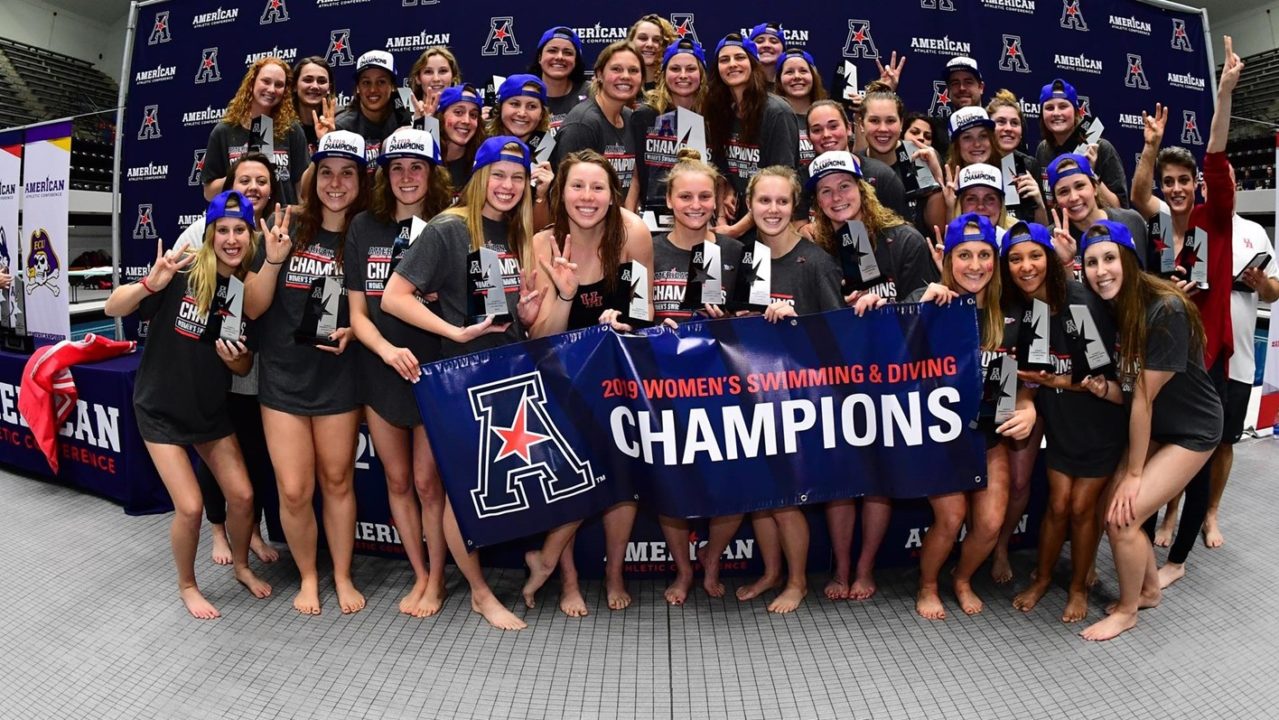 PROVIDENCE, R.I. – For the first time since 2017, the American Athletic Conference Swimming and Diving Championships are set to return to the CRWC Natatorium in Houston, Texas. The 2020 conference meet is slated for Feb. 19-22 and will air on the American Digital Network. Brendan Gulick, Kristin Keith and Stephanie Gonzalez will be on the call for the ADN broadcast.

A total of 42 event champions will be crowned during the four-day meet, with preliminary events beginning on Wednesday at 11 a.m. (CT) at the CRWC Natatorium.

Cincinnati Men Looking For A Three-Peat

With a third consecutive championship in 2020, Cincinnati would join ECU as the only three-time winners on the men’s side in meet history. The Pirates swept the competition from 2015-17, and ECU has never finished lower than runner-up in its first five championship meets as a member of The American.

Houston is in search of a historic finish of its own in the women’s swimming and diving portion of the championships, as a win in 2020 would mark the fourth straight American title for the Cougars. Houston dominated the field with 916 points to take the 2019 crown after previously winning in 2017 (772 points) and 2018 (826).

Following a pair of sixth-place finishes in 2014-15 during its first two seasons as a member of The American, Houston has finished on the podium four straight times (third place in 2016). The dramatic turnaround has established the Cougars as the most decorated women’s swimming and diving team in conference history.

Past Champions Expected To Be Back In The Fold

The 2020 American Swimming and Diving Championships are expected to feature a total of 26 defending individual champions returning to the field at the CRWC Natatorium. The 2019 men’s and women’s champion from each of the five primary freestyle events, men’s and women’s winners from both primary butterfly events and last season’s top finishers in the IM are expected in the field at this week’s meet.

ECU’s Gustavo Santos looks to become just the third American swimming and diving student-athlete to sweep a championship event in four straight seasons after winning the men’s 100 butterfly for the third consecutive year with a meet record time of :46.01 in 2019. Santos, who added wins in the distance in both 2017 (:47.07) and 2018 (:46.82), would join SMU women’s swimmer Marne Erasmus (2014-17, 100 butterfly) and Cincinnati men’s swimmer Christopher Bready (2015-18, 1,650 freestyle) as four-time American individual champions in a single discipline and distance.

A total of four different swimmers are in search of their third individual American championships in a given event. Houston’s Zarena Brown has swept the 100 freestyle, the 200 freestyle and the 500 freestyle each of the past three seasons for the Cougars. Brown ranks second in the 100 and first in both the 200 and 500 freestyle in The American in 2020 entering the meet. Erin Trahan from SMU is in search of her third consecutive win in the 100 butterfly and comes into the championship meet as the top-ranked swimmer in the distance in the conference.

Jacek Arentewicz from ECU has swept the men’s 100 and 200 breaststroke two years running, including a championship record time of :52.64 in the 100 breaststroke in 2019. Arentewicz ranks third in the 100 and 200 breaststroke in the conference this season on his way toward the championships. Dominic Polling of Cincinnati is hoping to capture his third straight win in the 200 IM after repeating as American champion in both 2018 and 2019. Polling (1:46.24) is narrowly behind ECU’s Marek Osina (1:46.14) for the top spot in the conference this season.

UConn’s Will Kearsey swam the 50 freestyle in a time of :19.55 at the Rutgers Invitational in December for the top conference showing in the distance this season, just ahead of the championship record set by Louisville’s Joao De Lucca at the 2014 meet.