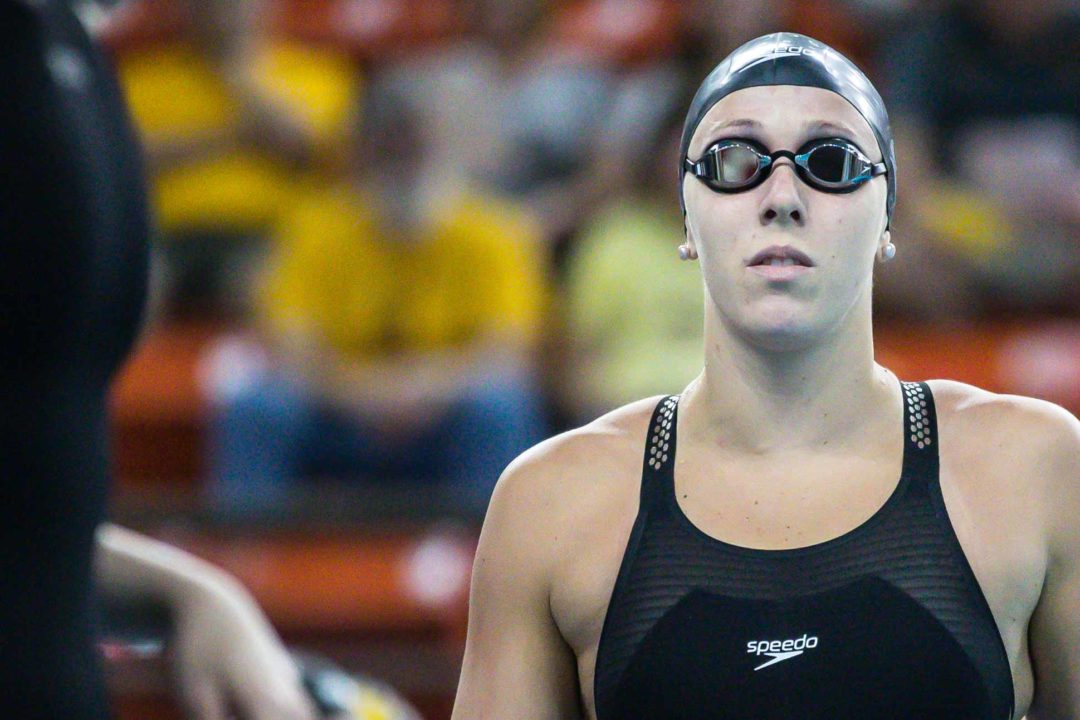 Cal swimmer Abbey Weitzeil (above) is the only aquatic sport nominee for this award, which was first given 90 years ago. Archive photo via Jack Spitser/Spitser Photography

The AAU James E. Sullivan Award ceremony has gone online. The announcement of the winner of one of the country’s oldest and most prestigious awards for amateur athletes will be announced Wednesday, April 29th at 8PM Eastern Time on the Sports Stories with Denny Lennon video podcast. The 2020 event will award the best performers in the 2019 calendar year.

The award, given to the United States’ top amateur athlete, was first given in 1930 It has been won by swimmers 18 times and water polo players 3 times. The most recent aquatic sports winner was another Cal swimmer, Missy Franklin, who won the award in 2012.

Among the 10 finalists for the award is Cal senior swimmer Abbey Weitzeil. Since finalists for this award was announced, Weitzeil was also named the Honda Sports Award winner as the best female collegiate swimmer of the 2019-2020 academic year.

One of 5 aquatic sport athletes who were named semi-finalists for the award, Weitzeil was the only one to advance to the finals (Wisconsin swimmer Beata Nelson, Stanford water polo player Mackenzie Fischer, fellow Cal swimmer Ryan Hoffer, and incoming Duke diver James Harding Jr.).

While Weitzeil had her senior season cut short when the NCAA cancelled all swimming & diving championships due to the coronavirus outbreak, she still inserted her name in the history books in December. At the Minnesota Invite in December, she became the first woman in history to split sub-21 seconds in the 50 yard free when she swam a 20.90.

What Weitzeil would do at those NCAA Championships was still a matter of discussion when they were cancelled after she hurt her arm on the finish of the 50 free at the Pac-12 Championships for the 2nd straight season. That led her to sitting out the conclusion of that meet.

Weitzeil is one of 9 collegiate athletes named as finalists for the award. Of that group, all but Dana Rettke (volleyball) and Trevor Lawrence (football) had their collegiate national championship events cancelled. The 10th is 19-year old Rhythmic Gymnast Evita Griskenas.

It has never been adequately explained how Michael Phelps won this award for “amateurs” in 2003 when he had already been a professional athlete for more than three years at that point.

The definition of “amateur” athlete, in large part because of Phelps, has evolved. It’s sort of a relic from the era where amateurism at the Olympics was enforced, but “amateur” used to mean “people who aren’t paid, and people for whom the primary competition is the Olympics.”

I’m pulling for Abbey of the Golden Bears!