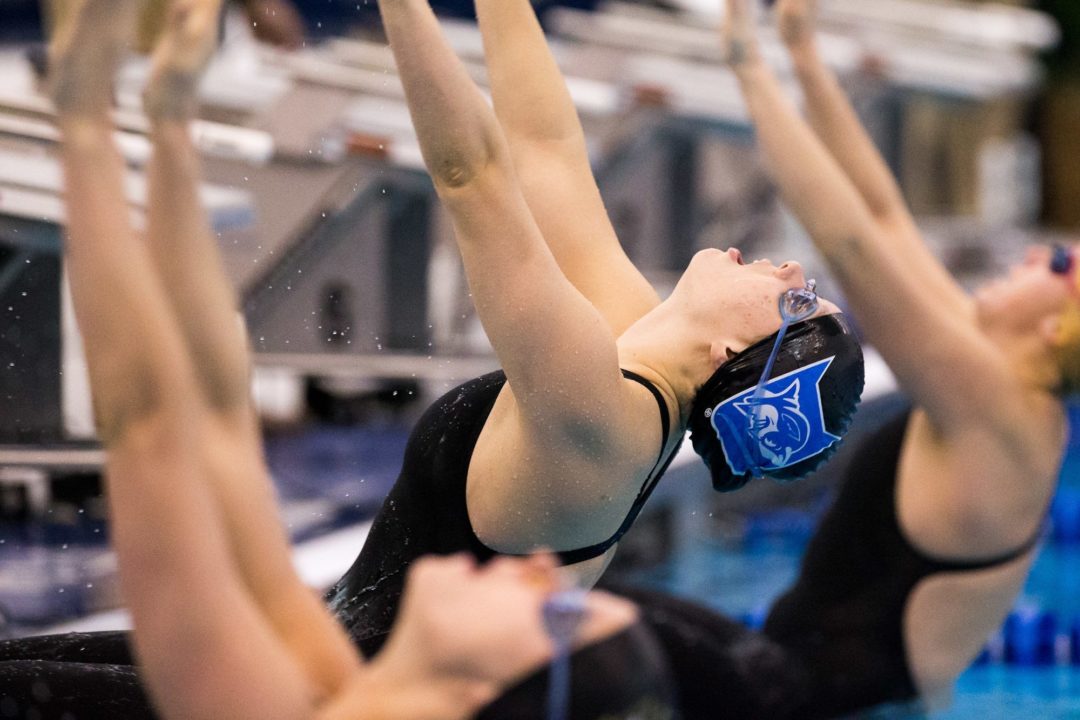 Duke Swim Camp, is located in Durham, North Carolina on the beautiful campus of Duke University. This camp is open to boys and girls ages 9 and up. Duke Swim Camp is specifically designed for the swimmer wanting to learn elite level techniques and training skills. Our staff conducts two daily sessions, which include a workout, technique and drill work on all four competitive strokes, starts, and turns, as well as video feedback. Enrollment is limited to 60 campers to ensure the most effective staff to camper ratio.

For the best coaching and instruction, we limit the number of registrants to 60 campers per session. Register now to secure your spot! The full cost of camp is due at the time of registration and includes a camp t-shirt and swim cap.

Campers must be 9 years old at the start of camp. If anyone younger than 9 is interested in attending, they must be able to swim all four strokes competitively and should contact Dawn Kane at [email protected] before registering.

The fifth head coach in school history, head coach Dan Colella has helped the Duke men’s and women’s swimming and diving squads make great strides in each of his 13 years at the helm of the program. Under Colella’s direction, the Duke men and women have made appearances at the NCAA Championships each of the past 10 seasons and continue to strengthen their reputation within the Atlantic Coast Conference, all while adding top recruiting classes from around the globe.

Development of talent and strong performances in the postseason have become a hallmark of Colella’s tenure in Durham, as the program has produced at least one ACC individual champion at seven of the past 10 conference championship meets. Duke has also built toward success on the national and international levels, sending representatives to the NCAA Championships, USA Swimming National Championships, U.S. Olympic Team Trials, the FINA World Championships and the 2012 and 2016 Olympic Games.

The Blue Devils continue to establish a legacy of excellence in the pool, boasting 32 All-America selections over the past 13 seasons. Duke swimmers and divers have also captured five NCAA individual titles and totaled 46 podium finishes at the ACC Championships under Colella’s watch. The program record books have been completely re-written in that time, with the oldest standing school record dating back to just 2010.

Dawn Kane is in her 14th season on the Duke swimming and diving staff after being elevated to the position of associate head coach in August, 2014. She has played an integral role in the development of the program since arriving in Durham with head coach Dan Colella in 2005-06.

Kane has been instrumental in building the Duke swimming and diving program to its current level of success, guiding student-athletes to numerous achievements at the conference, national and international levels. Under Kane’s guidance, the Duke men and women have made appearances at the last eight NCAA Championship meets and continue to make strides within the ACC.

Doak Finch joined the Duke swimming and diving program as an assistant coach in September, 2016.

Finch came to Durham after spending three seasons as an assistant coach at Penn State. During that time, he helped guide the Nittany Lion women to top-25 finishes at the 2014, 2015 and 2016 NCAA Championships, and the men to top-25 showings at the national meet in 2014 and 2015. As the program’s long group coach, Finch directed his athletes to six individual school records. His responsibilities included writing daily practices, designing seasonal training plans, serving as the team’s academic liaison and assisting with all aspects of recruiting.

Josh Stanfield joined the Duke swimming and diving program as an assistant coach in July, 2018. He came to Durham following a successful tenure at Gardner-Webb.

Stanfield brings a wealth of coaching experience to Duke, having spent the past six seasons with the Runnin’ Bulldogs. He previously served as an assistant coach before being elevated to the role of associate head coach for the 2017-18 campaign. Stanfield was also integral to Gardner-Webb’s recruiting efforts.