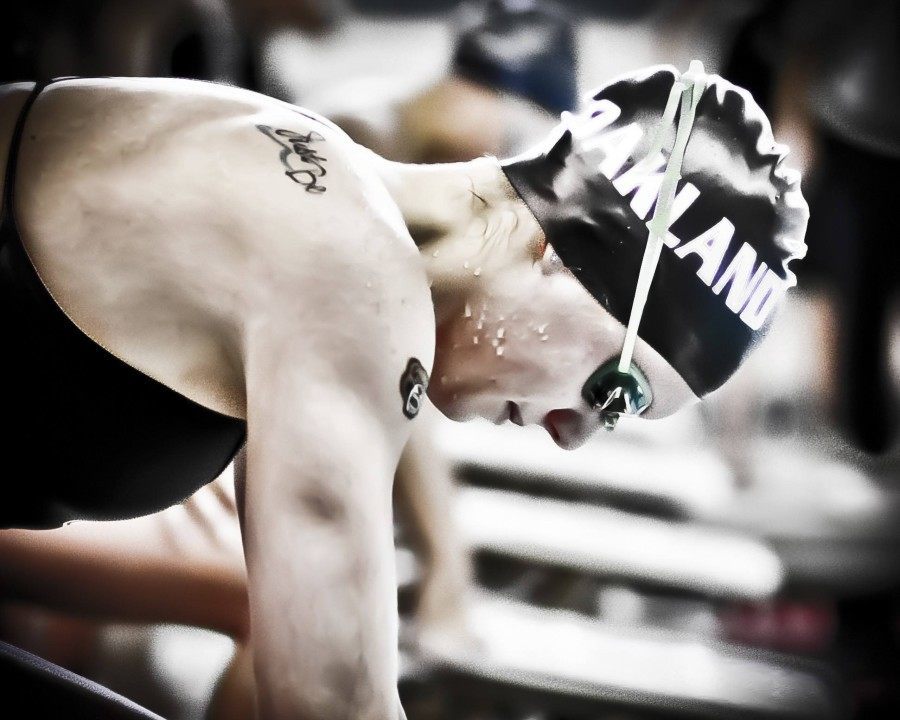 Oakland won 3 out of 4 relays, but the women are still in 3rd place due to their diving gap. Stock photo via Oakland Athletics

On the first night of competition for the 2018 Horizon League Championships, the Oakland University Golden Grizzlies won 3 of 4 relays, and broke the league record in the 200 medley relay. Despite winning both women’s relays, Oakland finds itself in 3rd in the team standings due to UIC and Milwaukee’s excellent diving finishes in the 3 meter.

The Oakland team of Grace Shinske (25.10), Sydney McDowell (28.60), Holly Morren (23.85), and Katie Colwell (21.92) combined to post a 1:39.47 to win by over a second and break the Horizon League record. Their back half of 45.78 is one of the fastest from any of the mid-major conferences that have swam already this year. Outside of Bella Hindley’s (Yale) 21.62 at the Women’s Ivy League Champs last week, Colwell was the the only other medley relay anchor from a mid-major school to break 22 seconds.

Oakland’s men kept the ball rolling by throwing down their fastest time of the season in the 200 medley relay (1:27.76) to win by half a second over Cleveland State. Oakland had the fastest front half in the field, where senior Paul Huch delivered a 22.45 lead-off, and junior Tony Eriksson gave a 24.20 breast split to the Golden Grizzlies. Freshman Rudy Aguilar posted a 21.43 fly split and Brant Cassidy gave a 19.68 on the anchor leg.

A veteran Oakland team came through to win the 800 free relay, comprised of junior Amber Lefler, and seniors Cassie Misiewicz, Alysse Fischer, and Arynn De Leeuw. Their splits were 1:50.67, 1:51.17, 1:49.95, and 1:49.39 respectively. On a somewhat fun note, 2nd place finisher UIC had a member from each class on their relay: freshman Morgan Bosse, sophomore Misha Neal, junior Lexie Joy, and senior Brie Hines. Joy led off with a sizzling 1:47.25, sending in Neal with nobody anywhere near her. Oakland managed to wear down the UIC lead and eventually overtake them, and Hines was cutting into that lead on the final 100, but ultimately ended up giving UIC a comfortable 2nd place finish.

Cleveland State stopped Oakland from sweeping the opening day relays by taking the 800 free relay on the last leg of the race. The team of Jason Van Der Touw (1:38.26), Erwan Mahoudo (1:38.17), Dominik Niedzialek (1:39.20), and Sean Mulvin (1:37.33) combined to post a 6:32.96 to Oakland’s 6:33.57. Oakland held the lead until the 650 mark, but Andrew Binder was overtaken by Mulvin, and Mulvin only expanded his lead after that. Freshman Golden Grizzly Rudy Aguilar threw down the fastest split in the entire field, going a 1:36.72 on the lead-off leg. That lead gives him a comfortable advantage in the 200 free on day 3, ad the next fastest split was Sean Mulvin’s 1:37.33, and it was from a flying start.

Freshmen ran the show in the women’s 3 meter diving, taking 5 of the top 8 spots. UIC freshman Cydney Liebenberg moved up a spot from finishing 2nd in prelims to winning in finals with a score of 298.65. UIC also had another A finalist: freshman Kallie Zuidema, who came in 6th. Milwaukee also had 2 A finalists, junior Cassidy Pilo, who finished 3rd, and freshman Ashley Thein, who came in 7th. Those finishes contributed massively in the team standings, allowing them to overtake Oakland, which didn’t have any divers score.